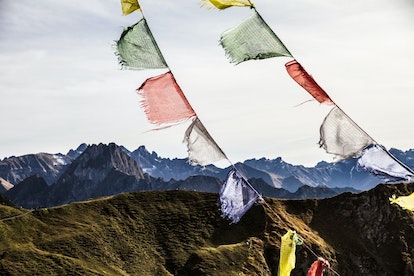 Many parts of the world celebrate their own New Year, and Tibet is no exception. This Tiben New Year celebration is called Losar, and it’s based on the lunar calendar.

The Losar celebration happens on the first day of the first month on the Tibetan calendar when there’s a new moon. This New year often occurs at the same time as the Chinese New Year, but not always.

Tibetans celebrate Losar with a three day festival of prayer, ceremonies, dancing, and family reunions. Traditional food is enjoyed and gifts are exchanged as a way to enjoy this special time of the year. Dating back to the pre-Buddhist period of Tibet, this has historically been a festival of honoring the new and remembering the past. In this guide, we’ll take a trip across the world to understand the significance behind the Tibetan New Year holiday.

Why is the Tibetan New Year (Losar) Celebrated?

Losar is an ancient tradition that dates back to the pre-Buddhism days. Before Buddhism was the religion of Tibet, people followed the Bon religion. This was a nature-based belief system, and the New Year was a time for giving offerings to the gods as a way to welcome the beginning of spring.

In the days before Buddhism, Bon was the indigenous religious tradition of Tibet. Bon relied on animalistic practices led by priests called bonpo. This religion focused on the balance of happiness between spirits, deities, and demons. People took part in ceremonies as a way to keep these deities happy throughout the year.

The folk religion of Bon relied on magic and ritual as a way to protect people from harm and bring good luck. One of these rituals was the New Year celebration. At its start, this was a way for the Tibetan people to bring the change of seasons from winter to spring. By making offerings to the gods, a bountiful spring season would be on the horizon.

Over time, this tradition evolved into the New Year (Losar) celebration as it’s known as today. With the introduction of Buddhism in Tibet, the practice shifted to incorporate Buddhist beliefs and traditions. However, you’ll still find many folk practices within this popular celebration.

» MORE: Create a FREE will in only 10 minutes

When is Tibetan New Year?

Because the Tibetan New Year takes place on the first day of the first month of the Tibetan lunar calendar, it’s not always on the same day. For the most part, the New Year falls in February, but it can also fall in March, depending on that year’s calendar. The upcoming dates are as follows:

If you’re planning to celebrate the Tibetan New Year, be sure to check with the yearly lunar calendar to plan properly. Keep in mind that it doesn’t always fall at the same time as the Chinese New Year. Tibet keeps its own lunar calendar.

How Do You Celebrate Tibetan New Year?

In Tibet and in Tibetan communities around the world, Losar is the biggest celebration of the year. This festive time is marked by cultural, religious, and family events for up to a week or longer, though the New Year itself only lasts 3 days. Many of these celebrations resemble Buddhist funeral customs, and they’re a way to connect people across generational lines.

As mentioned above, the actual celebration of the Tibetan New Year begins before the actual three-day festival. Families begin preparations about a month before the end of the year. To start, they clean houses thoroughly. The cleaning process is an important way to rid the home of any negative energy lingering from the previous year.

In addition, families prepare by making new clothing. This clothing is designed to be worn specifically during the festival. Again, this is a sign of cleansing and newness.

The family decorates the home with religious symbols drawn in white powder. White is the color of purity in Tibet, and monasteries are decorated in white as a sign of this festival. In Tibet, entire cities are whitewashed in preparation for the New Year.

The Tibetan New Year is divided into three distinct days, each with their own practices and traditions. While the festivities go on much longer than three days, these first days are the most important according to local custom.

An important part of this celebration is giving offerings to those you love and respect. Buddhists in Tibet visit their gurus and monasteries to wish good blessings upon them in the New Year. People bring barley seeds and homemade food to their home alters as a way to remember family members who passed away.

Women in the family wake up early in the morning to cook wine from the barley and prepare traditional dishes. These are brought to friends, family, and local monasteries as a way to begin the celebration on the first day of the New Year.

Home altars are an important part of everyday life in Tibet, but they’re also a huge part of the New Year celebration. Families decorate these altars during Losar as a sign of respect to the deities and their ancestors. During these three days, the family prays and provides offerings at home altars as a way to give thanks for the positive things that took place over the past year.

What do Tibet people use to decorate their altars? Locals use prayer flags, traditional food, and depictions of the deities as a sign of respect. The most common foods to prepare for home altars are Khasis (fried cookies) and Bongbu-achok, an ear-shaped fried food.

Because there has been a lot of Chinese involvement in Tibet, they’ve adapted many Chinese New Year traditions within the existing Losar customs. One of the most common customs is the gifting of red envelopes. These are usually only given to children, and they’re filled with money for the children or the family.

The red envelope is a symbol of prosperity in the New Year. According to local tradition, gifting these envelopes with money is a way to ward off evil spirits and protect young people. All money gifted should be an even number since odd numbers are a sign of bad luck.

Welcome the New and Celebrate the Past with Losar

The Tibet New Year is a time for welcoming the new while acknowledging the past. Tradition plays an important role in Tibetan culture, and the New Year celebration of Losar is just one way to honor their ancestors and customs of the past. Dating back to pre-Buddhism days, this New Year festival has come a long way. Today, it’s a way to connect with loved ones, respect those who passed before, and look forward to a year of new blessings.

From decorating the house with Buddhist symbols and white to eating traditional dishes, this is a time to celebrate. The Tibetan New Year might resemble spring festivals around the world, but it retains unique customs and facets thanks to Tibet’s indigenous roots. We could all use an opportunity to honor the past while also welcoming change and newness.