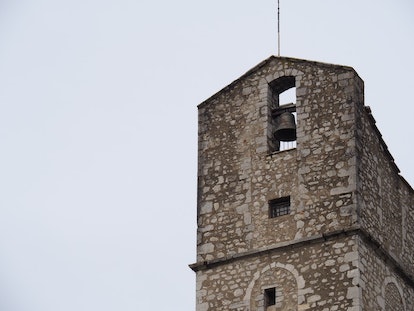 When you think of Medieval times, do you think of a theme restaurant or scenes from Monty Python and the Holy Grail? Unless you’re already interested in cemeteries, they probably wouldn't come to mind.

What would these old cemeteries look like? Would they resemble today’s? Do they still exist or were they lost to time? If we find them, what can we learn from them?

The Medieval Period took place during the 5th through 15th century. The chance of finding complete burial grounds from these years is pretty low. The closer to the present, the more likely we are to find large cemeteries somewhat intact. They may not be as large as mid-19th century Victorian cemeteries, but they may be larger than you expect.

Whether they are full cemeteries or mere traces of them, Medieval cemeteries still have plenty to teach us.

Before we “dig” into Medieval cemeteries, some context. Prior to the Medieval period was the era of the Roman Empire.

During this time, the masses believed in the existence of many gods, and other religions were persecuted. After the fall of the Roman Empire, believers in a relatively new religion called Christianity were free to worship in the open.

The fall of the Roman Empire

Before the Medieval times (or Middle Ages), Christians had plenty to fear. The Romans were polytheistic with their many gods. Because they believed in a singular God, Christian lives were in danger. But in 313 C.E., the “Roman emperor Constantine the Great ended all persecution and declared toleration for Christianity.” It would eventually become the Empire’s official state religion.

Before this time, you wouldn’t have seen a Christian cross on a gravestone. But ever since, Christian religious symbols in cemeteries were not uncommon.

The Museum of London said that “the establishment of Christianity … was the defining factor” of burial locations and cemeteries during this period.

Here are some other facts about the cemeteries of that time:

Where You Can Find Medieval Cemeteries

While some Medieval cemeteries do exist, they’re rare compared to the ones we see every day—even those hundreds of years old.

In fact, many disappeared over time and went underground. You may be able to see part of some upon visiting sites. In other cases, you’ll have to search online to see excavations of them done years ago.

Here are some examples of excavated cemeteries:

Features and Symbolism in Medieval Cemeteries

Symbolism has played an important role in cemeteries for centuries. In medieval funerals and graves, symbols are used to convey information or messages. In cemeteries, they can tell a lot about a person or the beliefs of the time period.

Some gravestones have symbols that are personalized for the individual who died. Others convey that it was a highly religious time and what that religion represented. When Christianity became widespread, crosses and other Christian symbols were used often on gravestones.

Animals can be found on an individual’s tomb as part of three-dimensional effigy carvings. Sometimes they are portrayed at or under the feet of the person. Other times they are found under the person’s head, like a pillow. They can also be found on monumental brass (engraved memorials are usually made of sheet brass). Here are a few common symbols and their associations:

A barrow was a type of burial used through the late 6th to 17th century. Also known as a tumulus, a barrow is a mounded grave with earth or stones piled on top of it.

They can be easily seen from afar and are often associated with people of wealth or importance.

Crosses are a common symbol of Christianity. They have been found on grave markers since the Medieval period.

In the late 13th and 14th centuries, elaborate cross patterns were used on gravemarkers and the stone slabs used to cover graves.

Simple geometric patterns were common symbols from graves through the 11th and 12th centuries. In the late 12th and 13th centuries, four circles and segments became popular.

Mythical creatures like griffins are sometimes found depicted on medieval graves. Griffins were thought to be guardians of the dead. Serpents and basilisks were sometimes depicted on graves as a symbol of the devil.

An Abbot in Peterborough Abbey is depicted with his feet on a serpent (representing his power over the devil) on his effigy tomb from the 13th century.

Shears were a very common symbol found on the graves of working and ruling class people alike.

They might have symbolized a wool merchant, a craftsperson, or in some instances, they may have been a metaphor for cutting the thread of life. In other instances, they were considered a female symbol.

Swords are found on 13th and 14th-century grave markers. They’re considered a masculine symbol and could denote a squire or knight.

The strangest thing you may see on a Medieval grave is a cadaver. Called “cadaver stones,” these fascinating carved slabs could be found during plague times (14th and 15th centuries). They were only on wealthy people’s graves, of course, as they were intricately carved and placed over their tombs.

In later centuries, such as the 17th and 18th, it was not uncommon to see skeletons, skulls, and even depictions of the Grim Reaper on gravestones. But the cadaver stones were much more morbid and far more detailed, though they had a primitive look to them. Cadaver stones did indeed depict cadavers, not skeletons.

The carvings represented rotting flesh as well as exposed bones. To take it a step further—or maybe a step too far—the carver also included worms and other creepy crawlies.

Amanda Norman researches gravestones and symbolism and shares the information on her blog Headstone Symbols and Meanings. She said that cadaver stones “show what happens to our bodies once buried … [and a] number of creatures like newts, frogs, maggots, etc., can be seen feasting on the rotting flesh.” Why? It’s supposed to recognize that, no matter what your station in life, death equalizes us all.

A cadaver stone can be found in Stamullen, Ireland, inside the ruins of St. Christopher’s Chapel. Another is located in Drogheda, Ireland, and features two cadavers on one stone. You can find it at St. Peter’s Churchyard near the back.

While Medieval cemeteries may not be like modern graveyards, their locations can be found. Each one has a fascinating history that’s worth digging into.

And keep in mind, for every Medieval burial ground we know of, there are many more yet to be discovered.