For a lot of people, thinking about death is uncomfortable. This is understandable. In our contemporary western culture, the average person isn’t very exposed to death. While you might have been to a family member’s funeral or watched a gory horror movie, death isn’t something that’s talked about much in polite society.

Yet, no matter how little we talk about it, death is the great unifier. It’s the one inescapable truth. Rich or poor, old or young, death could be around any corner. Everyone meets this same end regardless of how they get there.

It’s hard to capture the complex meaning behind this ever-present knowledge that death could be closer than you think. The Latin phrase ‘Memento Mori’ is a simple way to describe the lingering presence of death. In this guide, we’ll define this Latin phrase and take a trip through time to trace its use through history. 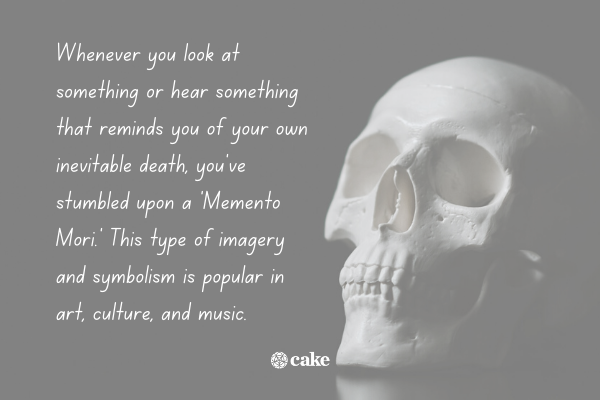 Since Latin isn’t widely spoken today, most people don’t recognize the meaning of ‘Memento Mori’ at first glance. In English, this term translates to ‘Remember you must die.’ The Latin word ‘Momento’ means ‘to remember’ while ‘more’ means ‘death.’

While it’s easy to mistake this term as depressing, it’s truly the opposite. It’s the slogan for the death positive movement, and it’s simply a way to encourage people to live life to the fullest. It implies that there’s an important balance to strike between remembering that death could always be near and dwelling on the inevitable.

This term gained popularity in culture during the 1590s, and it’s a noun that applies to any reminder of life. This phrase became popular during Medieval times when death brought final judgment before God. Typically a decorative object or ornament, ‘Memento Mori’ decorations come in all different shapes and sizes.

Whenever you look at something or hear something that reminds you of your own inevitable death, you’ve stumbled upon a ‘Memento Mori.’ This type of imagery and symbolism is popular in art, culture, and music.

History and Where ‘Memento Mori’ Comes From

There are different ways to represent death in different cultures. In ancient times, death was much closer than it is today. Disease, famine, and war were realities for many, and people were constantly reminded that the end of life was near. Thus, ‘Memento Mori’ was born.

The term ‘Memento Mori’ began as an ancient Roman tradition. It was said that after any military victory, the generals would parade the streets. The public cheered them on, and this was one of the greatest honors. It’s easy to understand how Roman generals could feel larger than life, as though they’re unaffected by death.

However, these generals had their own reminders following behind them. Slaves stood in the same chariot, whispering an important message. They said, “Look behind. Remember thou art mortal. Remember you must die.” These words brought these generals back to earth and reminded them of their humanity.

These macabre messages weren’t unusual in ancient Rome. In 89 CE, Roman emperor Domitian staged a ‘Memento Mori'' banquet. With slaves dressed as phantoms and gifts of gravestones, the emperor reminded his guests that their pleasures were only temporary. In a time when the emperor could have you killed at a moment's notice, these guests surely felt this message deep in their bones.

The ancient Egyptians also had a respect for death. One of the most well-known ancient wonders of the world, the Great Pyramid of Giza, stands tall as one of the many Egyptian symbols of death.

Not only did the Pyramid serve as a shrine to death with pharaohs resting in its tombs, but it also highlighted the Egyptian’s unique ways of remembering death. The preservation of dead bodies and the creation of death chambers was just one of their many ways to appreciate life. The Egyptians, like the Romans, fully embraced the philosophy behind ‘Memento Mori.’

In Medieval times, Europeans were constantly exposed to death. Epidemic disease, famine, poor nutrition, and violent warfare meant that the typical life expectancy was only around 30 years old. Death was a large part of daily life. That’s why the ‘Memento Mori’ message was so prominent in Medieval art and culture.

Because death meant either one of two things (Heaven or Hell) to Medieval Christians, it wasn’t something to be feared. For those who lived a life free of sin, death was a way to escape the suffering of this time. The trend in European art wasn’t to look away from death but to confront it openly.

Some of the popular imagery in the Medieval ages shows just how popular this rule of thought was at the time. Visuals of dancing skeletons, snakes, and corpses could be found in paintings, iconography, and tombs across Europe.

The mission behind this art was to urge sinners to repent, and there’s an undeniable beauty in the fearlessness of these artists. At a time when the Black Death brought down kings and commoners alike, this was yet another reminder that death was never far away.

How Do People Put ‘Memento Mori’ Into Practice? 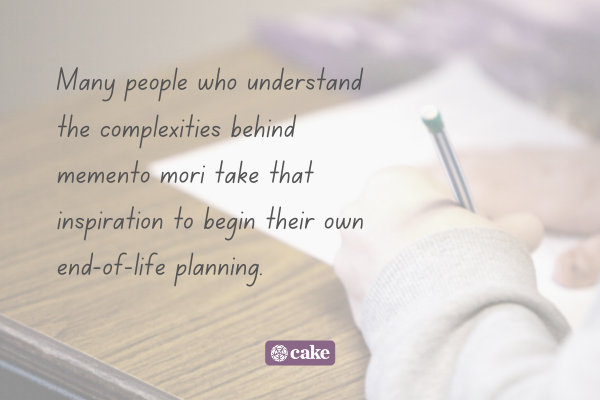 Memento Mori is a philosophy that’s very much alive and well today. With the rise of the death positive movement, more and more people are learning about the history behind this Latin phrase.

There is no single way to put memento mori into practice, and it’s largely up to the individual to do their own meditation on what this phrase means to them. However, here are some of the most popular ways to put the concept of “remember you will die” into practice.

Plan for the uncertain future

First, many people who understand the complexities behind memento mori take that inspiration to begin their own end-of-life planning. Though death comes for everyone, it doesn’t come at the same time. There are no guarantees, and not everyone lives into old age. The best way to prepare for this uncertainty is to take action while we can.

End-of-life planning doesn’t have to be intimidating. You can create a free plan to share with loved ones right here on Cake, and there are many ways to consider your wishes now. When the time does come, your family will feel confident knowing they’re carrying out your wishes.

Be open with loved ones

Another important part of memento mori is openness. It’s an invitation to start conversations around death and dying with your family. This shouldn’t be taboo. Though most avoid death in polite conversation, there is nothing to fear or be ashamed of.

When we talk about life, death, and everything in between, we break down barriers between those we love. We encourage them to consider their own mortality and place in this world. More importantly, it’s a reminder that we won’t be here forever.

Live life to the fullest

Finally, living a life aware of death is an invitation to live at the most basic level. Because death comes for everyone, there is nothing to fear. There is no worrying about what might happen in the future; it’s just about living in the moment and taking advantage of the time you have.

Memento mori keepsakes are a way to keep your mortality top of mind no matter what the day brings. These can be something in your home, something kept on your person, or just a symbol that’s meaningful to you. From famous symbols of death to the traditional skull, this is a highly personal choice.

The most popular type of memento mori keepsake is to wear a ring. Historically, these were used to remind the wearer that death was always near. These rings have come back into popularity, and it’s easy to find them on mainstream marketplaces like Etsy.

Just as memorial tattoos have gained in popularity, so have memento mori tattoos. These are any depiction or symbol that reminds the individual of death and their own mortality. Skulls, skeletons, the hourglass, the grim reaper, and the phrase “memento mori” itself are all popular tattoo options.

Another common way to represent one’s mortality is through art. Art has long been used to honor death and life, and this is true today. You’ll find a lot of death symbolism in modern and classic art, and these are common household pieces. Things like skulls, crossbones, symbols of time, and so on are all used to communicate this message. 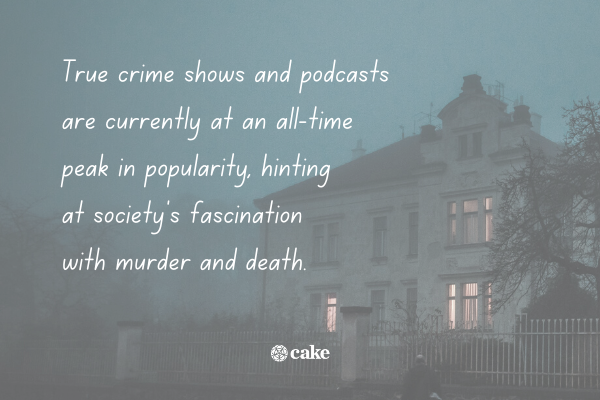 Today, you’ve likely encountered ‘Memento Mori’ in some shape or form. Not only is it popular in the art of today, but it’s also reached modern pop culture in the form of music, movies, and TV. Steve Jobs famously hinted at this philosophy during his lifetime. He said, “Remembering that you are going to die is the best way I know to avoid the trap of thinking you have something to lose. You are already naked. There is no reason not to follow your heart.”

To show you just how common this messaging is, let’s explore some popular culture references. Did you catch any of these?

These are just a few of the many ways 'Memento Mori’ appears in daily culture and art. All of these symbols go to show that death is hidden (and not-so-hidden) in daily life. It’s intertwined with our western, consumer-driven culture. Today, ‘Memento Mori’ is our love for true-crime shows and sugar skulls on popular fashion. It’s just as permanent as death itself.

While there’s no one-size-fits-all approach for how to accept death, ‘Memento Mori’ encourages us to think critically about the meaning of life. Whether we find comfort in religion, pop culture, or art, we can all agree there’s something soothing in seeing how humans have found peace in death in the past.

From roman generals keeping a level head off the battlefield to European plagues, death is always closer than we think. However, death planning doesn’t mean we need to live in fear. Instead, it’s a chance to celebrate life at every moment.

Symbols of death Death and dying