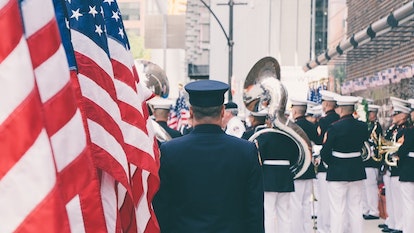 Memorial Day is a holiday that honors those who died while serving in the United States military. Unlike Veteran’s Day, this holiday meant to be celebratory. Instead, it's a day for somber reflection. There is no one way to reflect, although there is a national moment of silence every year at 3:00 pm EST.

But, not everyone observes that moment. And everyone has a unique way of grieving and mourning for lost loved ones. A lot of people find comfort in listening to music. It can be a way to feel connected to loved ones. Here, we’ll talk about some Memorial Day songs you can listen to in the spirit of the holiday.

And for your reference, here are the dates for Memorial Day in the next few years:

Rocks music may not seem like an obvious genre to listen to when you’re grieving. But soldiers don’t necessarily gravitate towards easy-listening. If you want to remember a lost loved one, it makes sense to listen to the music they enjoyed. When it comes to veterans, rock music is a very popular genre.

The Phoenix-based alternative rock band wrote this song about a true story. All five of the Sullivan brothers served together on the USS Juneau during World War II. The ship was sunk during the Naval Battle of Guadalcanal. All five brothers were killed in action.

As a direct result of their deaths, the United States Department of Defense enacted the Sole Survivor Policy. This policy allows people to be protected from draft or combat duty if they have immediate families killed in service. The plot of the film Saving Private Ryan was loosely influenced by this policy.

2. "Wake Me Up When September Ends" by Green Day

Billie Joe Armstrong, the lead singer of Green Day, wrote this song about the death of his father. But the video portrays a couple that is separated when the young man enlists to serve in the Iraq War. That, paired with the subtlety of the lyrics, makes this song perfect for a Memorial Day playlist.

4. "Letters Home from the Garden of Stone" by Everlast

Many soldiers struggle with what they’re asked to do in the line of duty. Everlast, a gifted songwriter, captures the feelings of ambivalence that soldiers sometimes go through. It’s a somber meditation on the realities of war and its costs.

The White Stripes frontman celebrates soldiers and their contributions to our society. The song primarily thanks them for protecting our many freedoms.

6. "Remember the Heroes” by Sammy Hagar

Hagar is known as something of a wild child, but this song is a poignant and moving tribute to soldiers. It addresses the complexities faced by veterans. It talks not just about serving on the front line, but also the challenges veterans face after returning home.

This innovative song looks at the life of a soldier through the things he left behind after death. It lists items of his sold at a garage sale - including a medal for bravery. The listener is encouraged to meditate on how little we value our soldiers sometimes.

Country music is known for being emotional. It’s also a genre that values storytelling above all else. This means there are several songs ideal for Memorial Day listening. Here are some of the most popular choices:

8. "Travelin’ Soldier" by The Dixie Chicks

This bittersweet country tune tells the tale of a shy Vietnam-era American soldier. He becomes pen pals with a fellow high-school student. Through the course of their letter writing, they fall in love. She learns of his death at a football game when his name is read along with other soldiers who died. She mourns for him alone. It’s an achingly beautiful heartbreaker of a song.

This timeless country song is told through the eyes of a soldier. He is writing what will be his last letter to his mother from the trenches.

Arlington National Cemetery is a United States military cemetery located in Virginia. This song pays tribute to the fallen soldiers buried there.

11. "The Ones Who Didn’t Make it Back Home" by Justin Moore

This song, released in 2019, is a more recent meditation on the sacrifices made by our armed forces.

This song is about a man who drives his brother’s truck to feel close to him after the brother is killed in action. It was inspired by the true story of a father who drives his son’s truck for the same reason.

This song pays tribute to all the soldiers who have served. But it highlights the ones who gave their lives.

Jones released this heartfelt tribute to the many soldiers lost in the Vietnam War. Himself a veteran Jones has a unique perspective on war. He served in the United States Marine Corps in the 1950s.

On Memorial Day we honor those who gave their lives fighting for their country. Listening to patriotic songs that celebrate the United States is an excellent way to honor our fallen soldiers.

While Greenwood is a country artist, this song transcends genre. It was released in 1984, but it feels as though it’s been around for much longer than that. It’s an iconic American song.

Countless artists have performed versions of the United States national anthem. You could have a playlist entirely made up of “The Star-Spangled Banner” covers. Whitney Houston’s iconic interpretation tops the list. But Pink and Demi Lovato’s versions deserve honorable mentions.

17. "America the Beautiful" by Katharine Lee Bates and Samuel A. Ward

The two people who collaborated on this iconic patriotic song never met.

Bates penned the words to the song as a poem originally entitled “Pikes Peak”. The poem was later published under the title “America” in a church periodical called The Congregationalist. It was published in July of 1895.

Ward penned the melody for the song in 1882 under the name “Materna”. In 1910, the lyrics and music were combined to create the song as it’s known today.

This rollicking tune was originally part of the 1960 stage musical George Washington Jr. It became the first song from a musical to sell over a million copies of sheet music. While the musical itself is often-forgotten, the song endures.

19. "This Land is Your Land" by Woody Guthrie

This folk song has been covered countless times. The original version had six verses. But the more widely-known 1944 version dropped a verse and changed some lyrics.

This bugle call is a great way to kick off your Memorial Day. It’s often used to rouse military personnel at sunrise, but that may not be how you want to start your day.

Cohan makes his second appearance on the list with this 1917 tune. The song was popular during both world wars. It was also used as a recruitment song by the United States military. And it famously appeared in the 1942 James Cagney film Yankee Doodle Dandy.

Best Memorial Day Songs for Kids to Understand the Holiday

This song (also known as “(I’m a) Yankee Doodle Dandy”) originally appeared in the 1904 Broadway musical Little Johnny Jones. It’s been a favorite with kids for generations.

This song for little ones talks about why we wear red poppies to honor soldiers on Memorial Day.

24. "My Country ‘Tis of Thee" by Samuel Francis Smith

While this song isn’t overtly about Memorial Day, it celebrates the beauty of America. It’s a good way to introduce a conversation about patriotism.

This patriotic march can help start a conversation about the flag and what it stands for. That can segway into a discussion of why people fight and die for their country.

26. "Ballad of the Green Beret" by Barry Sadler and Robin Moore

The lyrics of this song can start a discussion about sacrifice. From the opening lyrics “Fighting soldiers from the sky/Fearless men who jump and die” through the last stanza you’ll have plenty to talk about.

The lyrics of this song are kid-appropriate but still get into the nitty-gritty of the battlefield.

This song is about soldiers who return home after the war ends. But you can also use it as a chance to talk about the soldiers that don’t come home.

There are so many ways to take part in Memorial Day. You can attend a parade, visit a war memorial or veteran’s cemetery, or observe the National Moment of Remembrance. Regardless of how you choose to honor the holiday, these songs will provide the perfect soundtrack.