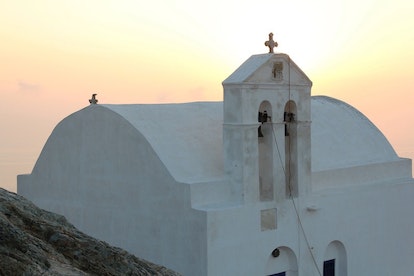 Funeral traditions are a way to bring peace and comfort to families after losing a loved one. In religion, these customs provide much-needed structure in times of crisis. When it comes to Greek Orthodox funeral traditions, there are very specific guidelines that families follow to ensure the service runs smoothly.

One of these traditions is known as the mercy meal or makaria. This takes place after the funeral, and it’s a time for the family to gather and celebrate the life of the deceased. Many people across the globe use funerals as a way to celebrate life, and food often plays a large role in these practices.

In this guide, we’ll explore what happens during a mercy meal after a Greek-Orthodox funeral.

What is a Mercy Meal (Makaria)?

The funeral process for Greek-Orthodox practices is very involved. There is a strict religious standard that must be followed. The funeral begins with a nighttime wake before the funeral. Then, the funeral itself is led by a priest who performs a holy prayer known as the Trisagion Service. After the service, the burial takes place.

Once the burial is over, it’s time for the mercy meal. This is similar to a repast after a funeral that you might find in other cultures. Traditionally, the family serves fish since this is a symbol of Christ. There are no desserts or extravagances, though this is a time for religious celebrations.

While many cultures enjoy a meal after the funeral, there are some customs specific to the Orthodox community.

First, this is a relatively informal event. Compared to the strict funeral, this is an opportunity for family members to refresh themselves without the rigor of the church. The focus of the meal is still on Christ, but it’s also a time for celebrating the life of the deceased.

While the term “makaria” is typically translated as the “meal of blessings” or mercy meal, this is a name that’s taken from Greek mythology. Makaria was a goddess. More specifically, she was the daughter of Hades.

Hades is the god of the underworld, and he was the one who looked over the souls of the departed. As such, Makaria became known as the symbol for a blessed death. In Greek mythology, the dead are known as “blessed ones,” and she was the merciful counterpart to the god of death.

While this is nothing but mythology nowadays, it’s clear to see how the term “makaria” became the important funeral custom it’s known as today.

Food at a Traditional Makaria

As mentioned above, the typical food of a mercy meal is fish. In particular, the family eats broiled fish. Why is this the focus? After his resurrection from the dead, Jesus ate broiled fish and bread with his disciples, according to the Gospel of John. Eating fish as part of the mercy meal is a symbol of Christ’s resurrection.

While other side dishes might be served, these are usually also classic Greek dishes. It is uncommon for the family to serve “modern” or unconventional Greek food. In addition, no desserts or sweets are part of this meal. The focus is on the fish and what it represents within Christianity.

Other common Greek food served during the mercy meal includes:

Each family takes pride in either cooking food themselves or catering from a local restaurant. These meals are an important part of the healing process of friends and family, and they’re a beloved tradition within the funeral process.

Though most of the Greek-Orthodox funeral process is very strict, there are fewer points of etiquette at a mercy meal. The main focus is to offer condolences and support for the family. However, there are still things to be aware of prior to attending a mercy meal yourself.

In this funeral tradition, it’s not appropriate to read a eulogy during the funeral service. Only the priest is to offer this during the service itself. While it is possible for the family to give a eulogy on behalf of their loved one, there is a specific time and place.

The most common time to deliver a eulogy at a Greek-Orthodox funeral is during the mercy meal. Since this is a time to celebrate the life of the deceased, the family prepares a eulogy to read during this time. Other guests might be invited to speak as well.

While it’s becoming more common for families to offer more than one entre, it’s still required for fish to be one of them. Some families encourage guests to bring dishes of their own, and this is a great way to offer support.

That being said, always ensure fish is being served. There is no strict requirement about the type of fish, only that it is boiled per tradition. Many choose cod or salmon, but other local options are acceptable as well.

If you attend the funeral, it is expected that you also attend the mercy meal. This is not seen as an optional event, and it’s a sign of disrespect to not take part in the meal. While some cultures reserve the meal or repast for close family only, this is not true of the mercy meal.

All mourners are expected to attend this meal out of respect for the deceased. While you might not need to stay for the entire time, it is polite to stop by to offer condolences.

Like with other mourning events, remember that this is a time for the family to find support. This means their needs are put first. Since the family generally coordinates the mercy meal and provides most (if not all) of the food, they are served first.

If you’re a guest to a mercy meal, allow the family enough time to fill their plates. Even if these family members are not ready to eat, give them the opportunity to begin the meal first. This is a respectful thing to do. Once the family sits at their places, it’s time for other guests to serve themselves.

While this is an opportunity to celebrate the life of the deceased, it’s also about being respectful. That means everyone should partake in the alcohol-of-choice responsibly, and voices should be at an appropriate level. Unlike other types of repasts or celebrations of life, the mercy meal has a religious focus.

Be open to saying prayers along with the family, and keep all comments on the family of the deceased. If you’re asked to share, your stories should be about the best qualities of the deceased. This is a time for reflection, community, and sharing.

Gifting at a mercy meal

Last but not least, don’t bring a gift to a mercy meal. This is not the appropriate time to gift flowers, food (unless requested otherwise), or a sympathy card. If possible, deliver all of these things on your own time prior to the funeral.

It’s common to send flower arrangements directly to the church or funeral home for use during the service. Otherwise, have them mailed to the family’s home.

This is a time for mourning the deceased. The family doesn’t have the time or ability to open gifts or cards. While offering support through a kind gesture is almost always a good idea, do this outside of the mercy meal.

Coming Together Over Food

Food really is one of the things that bring people closer together. After the passing of a family member, a mercy meal is a chance for those of the Greek-Orthodox faith to participate in a time-honored tradition of celebrating life. It’s a return to simpler times to remember why family is so important. Amidst a strict funeral practice, this is a way to offer the family some relief during their time of mourning.