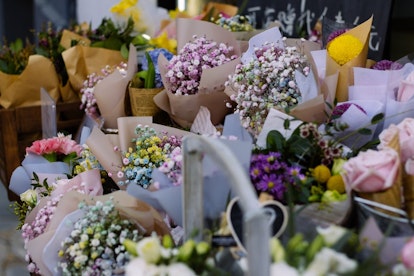 Whether you’re arranging a military funeral, or you want to support a fallen soldier or veteran’s family, flowers are an essential consideration. A military funeral is a final tribute designed to honor a soldier’s service to their country.  Funeral flowers, along with other symbolic gifts, rituals, and decorations, help demonstrate the importance of a military funeral and the gratitude attendees feel.

An American military funeral features ceremonies like the ritual folding and presenting of the United States flag and the playing of Taps. When you’re purchasing flowers for a military funeral, it’s important to consider these rituals and other factors.

A military funeral, whether you’re attending as a guest or helping to arrange the funeral for a loved one, can be intimidating. Here are some helpful tips for choosing the right arrangement, as well as some ideas for writing the perfect sympathy note for the military funeral flowers you choose.

Virtual funeral tip: If some guests can't attend the funeral in person, a service like GatheringUs can help you host a hybrid (virtual and in-person) funeral. Display the funeral flowers in a way that's visible to your online attendees.

Types of Flowers and Arrangements for Military Funerals

Here are some ideas to consider when you’re choosing military funeral flowers.

Carnations might beat roses when it comes to funeral arrangements, but roses are still a highly popular funeral flower. Roses universally represent passion and love, and they naturally bloom in two of the United States’ colors: red and white.

You can pair red and white roses with a blue flower, such as hydrangeas, to create a floral representation of the American flag.

One of only a few flowers that bloom in a true-blue color, hydrangeas are a perfect addition to patriotic flower arrangements. If you want to create a floral arrangement in red, white, and blue, consider adding blue hydrangeas to the mix alongside red and white roses or carnations.

In addition to their usefulness color-wise, hydrangeas hold a special meaning that applies well to military funerals. In general,  hydrangeas represent perseverance, which is a quality possessed by soldiers and veterans.

Poppies are a unique choice for military funeral flowers, and they’re one you might not include in a civilian flower arrangement. That’s because poppies—red poppies, in particular—hold a meaning that’s unique to fallen soldiers.

In World War I, a famous poem titled In Flanders’ Fields touched the hearts of many who’d experienced the hardships of war. The poem depicts bright red poppies growing in between the graves of fallen soldiers on otherwise barren and ruined battlefields.

Ever since World War I, red poppies have represented new life and hope, even in the face of desolation.

If you’re the one planning and arranging a military funeral, you might want to decorate the venue with flowers. The kind of floral centerpiece that decorates a funeral is called a “spray,” and it comes in two styles: casket sprays and standing sprays.

Casket spray. A casket spray is a floral arrangement, usually comprised of two or more colors and a backdrop of vibrant greenery. The casket spray lies directly on top of the casket during the service.

Standing sprays are often the most noticeable floral arrangements at a funeral because they stand between one and three feet tall (in addition to the height of the easel). They can be arranged in a specific shape, like a flag, a heart, or a cross.

If you’re not arranging the funeral, but you want to send flowers to a military funeral, a floral basket is your primary option. Floral baskets are the small (in comparison to sprays) arrangements that usually sit around the coffin or on tables off to the side.

Funeral guests can send floral baskets to the funeral venue or to the home of the bereaved along with a sympathy note. They come in a wide range of sizes and shapes, and they can feature a wide range of flower types and colors.

A wreath is another option if you want to give funeral flowers to the bereaved for a military funeral. Wreaths are usually small in size, which makes them appropriate as gifts. And unlike floral baskets, which you should send to the funeral venue or the family’s home ahead of time, guests traditionally hand-deliver wreaths when they come to the funeral.

If you want to bring a floral wreath to a military funeral, it’s usually best to check with the family ahead of time. They might have plans that don’t include accepting flowers, or they might prefer other gifts, like donations.

If real-life flowers aren’t an option, or they’re just not ideal, you might be able to give virtual flowers, instead.

Check with the family to see whether they’ve set up an online memorial to the departed. If they have, the online memorial might have a feature for giving virtual flowers.

But you might want to tailor your message to suit the purpose of a military funeral. Here are some ideas to spark your inspiration if you’re writing a sympathy note for military funeral flowers.

9. You have my deepest sympathy and my sincerest gratitude

It isn’t just the soldier who made a sacrifice for their country. You can share your heartfelt gratitude for the family’s loss, too.

A military flowers sympathy message can be short and to-the-point. Simply letting the family know that the beautiful floral arrangement you sent is in memory of the deceased will go a long way.

Stating that a floral arrangement is “in memory” of the deceased makes the point that you’re thinking of the person and remembering their life.

But saying that you’ll never forget them goes a step further, assuring the family that your condolences aren’t only temporary.

12. Remembering and honoring a fallen hero

You can let the grieving family know that their departed soldier or veteran was a hero to you.

Military funerals are so important in the United States that they’re even part of U.S. law. The Department of Defense is required to provide any eligible veteran with free military funeral honors upon the family’s request.

And military funeral flowers, in addition to the customary rituals and ceremonies, play an important role in honoring a deceased soldier. Just as with civilian funerals, flowers at a military funeral are a way for guests to physically show their grief, respect, and support for the family.

However, some military funerals don’t include flowers at all. Flower-friendly weather is important when the ceremony takes place grave-side, and cemeteries have their own rules regarding flowers. If you’re thinking about sending funeral flowers for a military funeral, it’s always best to check with the family ahead of time.