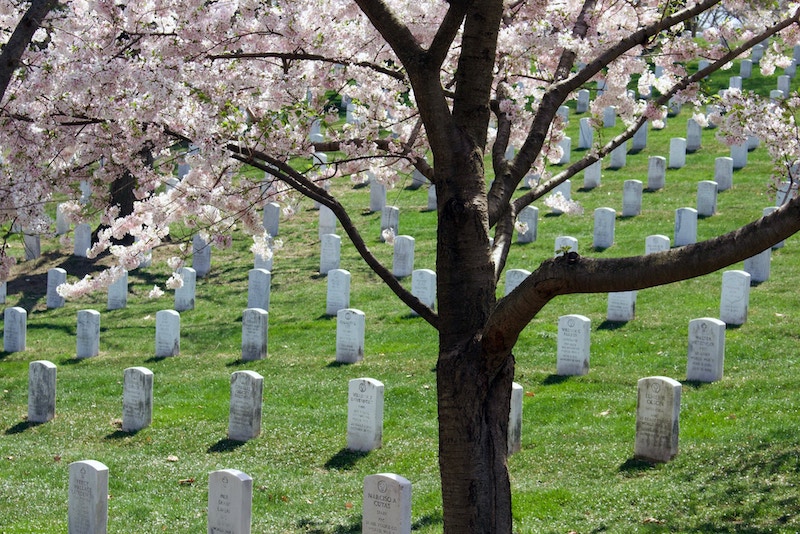 When attending a military funeral in the United States, you should prepare for an experience similar to other funerals in the Western world.  Expect to wear formal attire and behave respectfully.

These events can range from being large in scale to fairly intimate gatherings. There are often additional ceremonies involved depending upon the rank and wishes of the deceased. Military funerals are less involved for civilians than they are for soldiers. Service members are expected to salute at certain times, and that may play a role in the funeral.

In the next several sections, we’ll explore American military funerals in depth. After reading this article you should feel confident that you will know what to expect when attending the service.

Who Qualifies for a Military Funeral?

Specific laws determine who’s eligible to receive a military funeral. The main criteria are that the deceased must have been a member of the Army, Marines, Coast Guard, Air Force, or Navy and have completed at least one term of service.

This means the person in question must have been a veteran or someone who died during a battle. The veteran’s spouse or child, if still a minor, can also qualify for military funerals.

Family of a military veteran can request the military ceremony for their lost loved one and the government by law must perform the funeral.

Soldiers that have been dishonorably discharged do not qualify.

What Happens During a Military Funeral?

Military funerals are formal affairs that consist of several distinct sections. Depending on the rank of the deceased, and the requests of the family the funeral may have an honor guard, rifle detail, a playing of “Taps”, or all of these. A special ceremony known as a 21-gun salute is sometimes performed at the gravesite of the deceased.

When you arrive, you may see soldiers standing at attention awaiting the hearse. Once the hearse arrives, they’ll remove the casket and carry it to the site for the ceremony. Don’t speak to these soldiers until after the ceremony.

The proceedings always take place outdoors. This allows for horses, and the shooting of firearms to take place in the ceremony without destroying any property.

People that are welcome to attend military funerals are the friends, family, and fellow officers of the deceased.

A family member or someone selected by the family will lead the funeral.  Any military honors earned by the deceased are read aloud.

Military personnel will then perform a ceremony which may include color guards, a rifle detail, and the playing of “Taps.”

Role of flags, salutes, and songs

A rifle detail is a ritual that has its origins in Europe, where it was customary to call a cease-fire for dead and injured soldiers to be safely removed from the battlefield. Often, they’ll fold up the flag with an expended bullet shell during the honor guard.

In an honor guard, two members of the armed forces will ceremoniously fold an American flag into the shape of a triangle and present it to the next of kin. This shape of the folded flag is a symbol that resembles the three-pointed hat worn by soldiers in the American Revolution.

If you’re the next of kin, one of the soldiers will recite the following words to you as they hand over the folded flag:

“On behalf of the President of the United States, the United States (Army, Marine Corps, Navy, Air Force or Coast Guard ), and a grateful nation, please accept this flag as a symbol of our appreciation for your loved one's honorable and faithful service.”

Sometimes a military band, bugler, or stereo recording will play the song “Taps”. Active military members perform this song at the end of each work day. Because of this tradition, military members play “Taps” at funerals to symbolize the end of the deceased veteran’s service to the nation.

At the funeral, civilians should behave respectfully at all times. Active duty military members must salute at certain parts of the ceremony.

Formal attire is typical for military funerals. Active service members should come in uniform. For more information on what to wear review this guide on what to wear to a funeral.

The mood at military funerals is serious and formal. Civilians are not required to salute at any time. However, those that are active military must salute whenever the casket is being moved.  This includes the arrival of the hearse and also the lowering of the coffin into the ground. They must also salute during the playing of “Taps”, and also during the rifle detail.

Role of presents, flowers, and money

Flowers are a customary gift to bring to a Military funeral. Other gifts such as money or cards are welcome but not expected.

After the funeral, the casket or urn will be lowered into the grave. Depending on the graveyard visitors will be able to visit the gravesite for one to three business days after the funeral.

The deceased will arrive in a hearse or horse-drawn carriage. If arriving by horses, some of the animals may have riders while others don’t. This is an old custom taken from the times when riderless horses were used to carry military supplies. The lack of a rider allows the horses to haul more weight.

There is a special honor reserved for members of the Marine Corps who achieved the rank of Colonel or higher called the Caparisoned Horse. This comes from an ancient practice in which soldiers would sacrifice a horse at the funerals of high ranking officers. The belief was that the slain horse would then accompany the soldier’s soul into the afterlife.

In modern times, the horse is no longer sacrificed. However, it’ll often be dressed in black cloth with a hood and cape. The Caparisoned Horse is riderless and leads the funeral procession should the service members choose to recognize this custom.

Burial, cemetery, and other customs

Depending on the family’s wishes, the deceased may be buried, cremated, or in some instances cremated and then buried.  Regardless of the method the same honors and ceremonies are available.

Keep This in Mind Before You Attend

After the funeral, the veteran’s remains are buried beneath a gravestone in a national or local graveyard. Bereaved family members and friends may visit the gravesite whenever they wish.

Citizens of the United States also celebrate Memorial Day every year in May.  This is a special holiday meant to honor and give remembrance to veterans and military personnel.

Military funerals are respectful affairs meant to honor our departed service members.  The ceremonies and customs have a long history and commemorate those who have been brave enough to devote their lives to serving the country.

Dress and act appropriately and you will find the funeral to be an earnest and powerful way to remember your loved one.