The mourning dove, a bird commonly seen throughout the world, frequently makes an entrance into culture, stories, legends, and belief systems.

Though there are many types of doves, mourning doves seem to have caught the imagination and attention of people everywhere. After the traditional white peace dove, mourning doves are mentioned more than any other type of dove in everything from literature to spiritual texts and lore.

1. Symbol of Peace from Around the World 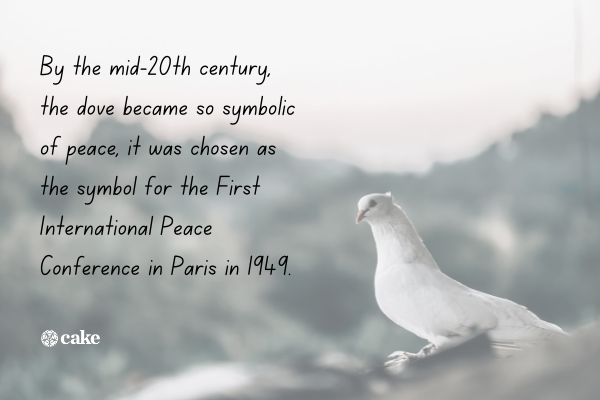 Though this is most often assigned to the classic white dove, doves in general have long served as a symbol of peace. Traditionally, the white feather meaning ties in most closely with peace, purity, and hope. However, doves of all kinds are used to represent peace, especially when pictured with an olive branch in their beaks or talons.

In fact, by the mid-20th century, the dove became so symbolic of peace, it was chosen as the symbol for the First International Peace Conference in Paris in 1949. The famous painting by Pablo Picasso has become one of the most widely recognized paintings of peace and mourning dove symbolism ever since.

2. Symbol of Hope from Christianity

The dove is also a symbol of hope, largely due to its role in Christian scriptures. Two specific mentions in the Bible gave rise to the prominence of the dove as a symbol of help and hope.

The Story of Noah and the Flood

In the Old Testament book of Genesis, Noah was instructed to build a boat and, once inside, he and his family were saved from rising floodwaters. After 40 days and nights, the flood finally stopped but there was no dry land anywhere around.

As Noah and his family waited for the floodwaters to recede, they had little way of knowing when the ground was dry enough to go out. So, using an old mariner’s trick, Noah sent a dove to see if it would find dry ground. The first time the dove went out, it returned without finding any land.

Seven days later, Noah tried again. This time, the dove returned with an olive leaf in its beak. At this point, Noah and his family knew that the waters had receded enough that plants and trees were growing and it was almost time to leave the boat. The final time he sent the dove out, it didn’t return. Noah and his family knew the waters had fully receded and, just like the dove, it was time to start life on land once more.

The Story of Jesus’ Baptism

John, Jesus’ cousin, preached a message that called people to repentance from misdeeds and wrong living. Those who wanted to make a public demonstration of renewal and rededication to doing right and good in their lives were baptized by John.

One day, Jesus came to be baptized and when he did, the Bible records that the Holy Spirit descended on Jesus “like a dove.” Each mention of this occurrence is clear that it was not an actual dove that descended, but ever since that time, the dove became a symbol of the spirit of God. Because of this representation, the dove as a symbol of hope and peace gained more prominence.

3. Symbol of Love and Protection from Native American Culture

Doves and pigeons both are known to mate with one partner for life. Because of this monogamous relationship, they have come to be known as a symbol of love in many Native American cultures. Tribes such as the Aztecs and Mexican Indian tribes associated the dove with their goddess of fertility, Xochiquetzal, and the image was often used on wedding decorations.

Other Native American tribes viewed the dove as a symbol of protection. The Blackfeet tribe equated the dove with protection during times of war and safe return for the men who went to battle. War leaders would take dove feathers with them when going out to fight as a talisman for safe return.

Doves are thought to be good luck and aid in remembering loved ones, especially when that person was a spouse or partner.

4. Symbol of Loved Ones

Just as a dove is beautiful, gentle, and graceful, each friend and loved one also makes a beautiful entrance in our lives. Friends and family may have to fly away due to old age, sickness, or tragedy, but their influence will linger long after they have left.

5. Symbol of Long Life in China 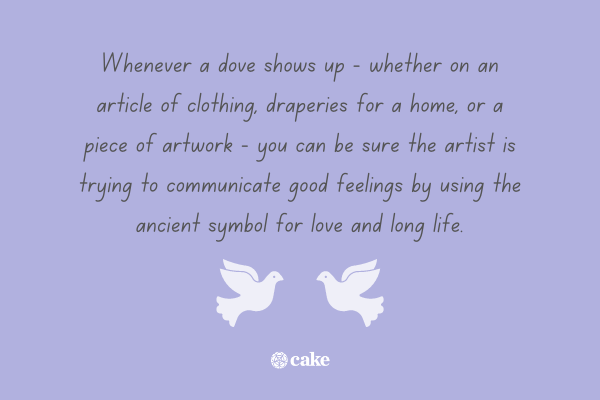 Since doves pair up for life, they have long been representative of a symbol of long life and fidelity in China. The dove is used in art, feng shui, decor, and design. Whenever a dove shows up — whether on an article of clothing, draperies for a home, or a piece of artwork — you can be sure the artist is trying to communicate good feelings by using the ancient symbol for love and long life.

In many stories and legends told in African nations, the dove symbolizes help, hope, and good fortune. In one African story, a woman and her child are about to starve to death while being held hostage by an evil ogre. A dove flies by the cottage and the woman feeds it with seeds. The dove returns day after day. Eventually, the woman asks the dove to find her husband so he could return to save them. The dove locates the husband and he comes to the cottage, kills the ogre, and the family is able to live together again.

7. Symbol of Repentance from Judaism

In Ancient Israel, the Hebrews practiced ritualistic sacrifice as an outward sign of repentance for any wrongdoing committed. While wealthier families could afford to sacrifice larger animals, such as sheep or cows, poorer families could sacrifice two doves instead. This practice continued throughout the history of the Jewish people up until the time that the temple in Jerusalem was destroyed in 70 A.D.

Archaeological discoveries have found that dovecotes were used to raise the birds in Jerusalem so travelers to the city could purchase doves for sacrificial purposes upon arrival instead of trying to bring the birds with them.

Because of this connection with sacrifice and atonement for sin, doves became a symbol of repentance and mourning over sin and wrongdoings.

8. Symbol of Romantic Love from Roman and Greek Mythology

In Greek mythology, the goddess Aphrodite, the goddess of love, is often pictured with doves floating around her. Similar pictures can be seen for the Roman goddess of love, Venus. In the Middle Ages, doves became a prevalent symbol for love and eventually were included in western holidays such as Valentine’s Day.

The symbolism of a dove has practically become synonymous with romantic love in western culture and has even found its way into pet names given to significant others such as “lovey-dove.”

9. A Symbol of Sadness 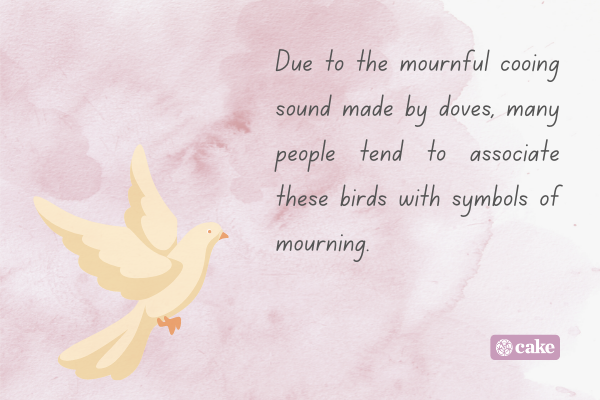 Due to the mournful cooing sound made by doves, many people tend to associate these birds with symbols of mourning. There are a number of instances in Christian scripture where doves represent mourning and sadness.

Twice in the book of Isaiah, the author writes, “I did mourn as a dove” and in the book of Ezekiel, a different author speaks of people “like doves… mourning.” It’s easy to see why the mournful and desolate sound of a mourning dove was associated with the actual process of mourning.

Though in these two cases the sound of a mourning dove is associated with sadness, the overwhelming majority of symbolism that is attributed to this beautiful bird is the exact opposite.

A Symbol of Hope and Peace

Doves have long been used around the world in nearly every culture as a symbol of love, hope, peace, and good fortune. Perhaps now when you see a dove, you’ll think of the love you share with those in your life and focus on the hope of a brighter, better future to come.