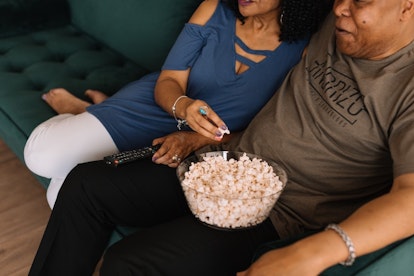 Films remind us that we’re not alone. They temporarily transport us somewhere else, whether that’s another time or place. They introduce us to new points of view and lend a helping hand. Along with the best life-changing books, movies are a powerful medium for sharing experiences and feelings.

While everyone has their favorite films, some movies are particularly special. These films changed lives and leave an impact that’s still recognizable today. Whether you’re in the mood for something that makes you think, or you need an emotional lifeline, these films are here for you.

These are the 30+ amazing, life-changing movies you need to add to your bucket list and watch before you die.

We all know someone who looks at the negative side of things. It's a Wonderful Life shares the story of a man weighed down by his debts. He decides the only way forward is to kill himself until an angel intervenes and shows him how important his life really is.

This film is a reminder that we’re never really alone, no matter how we feel.

2. Monty Python and the Holy Grail

This British comedy classic takes on the tale of King Arthur and the Holy Grail.

With a lot of satire and gleeful excess, this is a strikingly memorable, moving movie about adventure, humor, and friendship.

» MORE: "My friend just lost someone and I don't know what to do." Our checklist can help.

Sofia Coppola's romantic comedy Lost In Translation isn’t like other films you’ve seen of the genre.

A disenchanted actor making ends meet through Japanese commercials meets an unhappily married younger woman at a hotel bar. Though the connection is real, this is far from cheesy.

Dorothy’s classic adventure through the land of Oz left a mark on many. To this day, the story of the Cowardly Lion, the Tin Man, the Scarecrow, and the girl who just wants to go home says a lot about the nature of humanity.

The Lion King proves that animation can (and should) push storytelling further. This story, believe it or not, is a mash-up of Hamlet and tales from the Bible, but you’d never know it on the big screen.

Somehow, these cartoon animals tell a powerful story about love and loss.

Though this Steven Spielberg classic terrified beachgoers everywhere, it paints a stunning thriller about a killer great white shark and the brave men who battled it.

Though the shark is never really seen in full, it still managed to scare the living daylights of 1975’s film viewers.

The first Star Wars film might just be a cheesy space opera, but there’s no denying how compelling this tale as old of time is.

Sometimes we just want to see good vs. evil, especially when we know the hero wins.

8. Back to the Future

While not all Time Travel movies have what it takes to stand the test of time, Back to the Future is the exception.

Sure, this film might be a bit sappy, but it just goes to show there’s really no time like the present.

9. Raiders of the Lost Ark

This classic film plays into American’s imagination, introducing a character who is a professor by day, tomb raider at night.

With both thrills and action, this blockbuster hit proves the power of adventure.

What kid didn’t grow up loving dinosaurs? Jurassic Park brings viewers back to their childhoods, giving dinosaurs a second chance through a special experiment as a private island attraction.

Though only temporary, Jurassic Park challenges viewers to believe in the fantastic.

This space film covers the timeline of human existence, but it doesn’t give any clear answers for the future.

For a film that runs for 3 hours, this space-age classic argues that sometimes it’s our questions that are worth more than the answers.

Based on a short novella, Ridley Scott’s futuristic thriller takes place in a world where technology is equal to humans.

When the lead Replicant Hunter falls in love with what he’s supposed to destroy, how does the hero make the right choice?

This infamous film offered a new way of approaching superhero movies. Gone where the bright colors and comic book tropes.

The Dark Knight felt strangely real, as though Gotham could be a real city we all know. It’s this type of villain that makes viewers question who the real hero is.

E.T. captures the innocence and nature of childhood in a way few movies ever have. This Spielberg hit about an alien who befriends a young boy is all about acceptance and learning to let go.

A group of kids tries their best to save their house from being torn down only to find a pirate treasure map in The Goonies.

They begin an outlandish adventure to discover the treasure, encountering silly obstacles along the way. This film might seem childish from the outside, but it’s really a tale of nostalgia and friendship.

John Hughes is the king of teen movies, and The Breakfast Club is a shining example of his best work.

What happens when you lock stereotypical caricatures of teens in weekend detention? It’s a bit like group therapy but with a better soundtrack.

Adapted from the novel by the same name, this is a tale of American capitalism and greed. Like all great gangster movies, there’s a lot of violence and corruption.

Though Michael Corleone might seem unlikeable at first, the audience quickly falls for him and his struggles in The Godfather.

This Pixar classic paved the way for a new genre of family films. Following the misadventures of two lost toys searching for their home, this film offers viewers a trip down memory lane to their own childhoods.

A lot of people are scared away by the hype around Citizen Kane, and yes it lives up to these expectations.

Following the tale of Charles Foster Kane, a media magnate, this story shows just how alluring the American Dream can be.

Is there a greater love story than Titanic? This historical fiction masterpiece features two star-crossed lovers, paired together on an ill-fated ship that will never reach its destination.

21. Eternal Sunshine of the Spotless Mind

Eternal Sunshine of the Spotless Mind is about a man who chooses to delete his memories after a recent breakup.

It’s only once he begins experiencing these memories one final time does he remember why it’s important to remember the bad just as much as the good.

A father tells his son the biggest of tall tales, even on his deathbed. It’s not until his son begins to research these stories does he realize how spectacular his father’s life truly was.

This isn’t one of the traditional afterlife movies, The Sixth Sense challenges viewers to question what they see on screen. About a child who can see guests, you’ll never see this plot twist coming.

This story of racial tensions turning into violence might have erupted in controversy upon its release, but it still stands up today.

This film forced conversation about the racial inequalities that exist in the world, even if some people try to cover them up.

This account of World War II’s D-Day asks big questions about war and sacrifice. A missing soldier's brothers were killed in action.

An army captain leads a large rescue mission to save one man, even though others might lose their lives in the process.

This recent South Korean film won the Oscars Best Picture award for a reason. The movie follows the story of a poor family who schemes to become employed by a wealthier family.

Though things don’t go according to plan, this film leads viewers to ask themselves who the real parasite is.

Another Pixar classic, Inside Out isn’t afraid to cover complex topics. Sharing the story of a young girl struggling with her growing feelings of sadness, this movie argues that sadness is as essential as joy.

Directed by the first woman to ever win the Oscar for best director, The Hurt Locker isn’t your typical war film.

Set in Baghdad during the Iraq war, this movie tracks three army members in an explosive disposal squad. The team leader’s expertise treads the line between mania and respect.

Moonlight follows the lead character, Chiron, as a boy through adulthood.

This coming of age film shows the journey to manhood, and the importance of being who you are despite what society expects you to be.

With apocalypse survivors going to extremes to survive, this story paints a bleak picture of what humanity might have in store.

Movies are one of the most compelling forms of storytelling. From cancer movies that leave us needing a box of tissues to inspirational flicks that push us forward in times of crisis, movies relate to us in powerful ways.

Films allow us to walk in someone else’s footsteps, feel new things, and have experiences that aren’t our own. Even for characters that feel so different, it’s easy to fall in love with their stories and plights. There are so many films to watch and not enough time in the day. Luckily, we’ve done the hard work for you. These picks above are the best flicks to start.

From blockbuster hits to cult classics, there’s something for everyone. With all of these stories, you’re bound to start feeling introspective. Lean into these feelings to start end-of-life planning. These films above go to show that your tomorrows are limited, so it’s up to you to make the most of the time you have. What legacy will you leave?

If you're looking for more to add to your list, read our guides on the best books to read before you die.