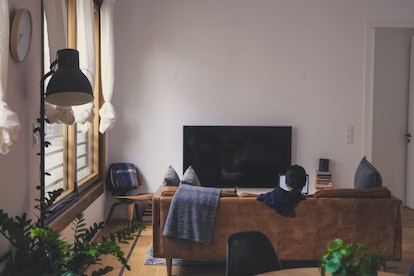 Being sick at home can be a real downer, but it’s also an opportunity for self-care and doing what you love. For many, this means browsing their favorite streaming services and on-demand networks for the best movies to watch when you’re sick.

Whether you’re looking for a virtual get well gift to send to someone under the weather or the perfect sick day distraction, there’s a film for you. These flicks do it all—put a smile on your face, make you laugh out loud, or even just wallow a bit. Taking a bit of a break to walk in someone else’s footsteps through a movie is sometimes one of the most therapeutic experiences.

Turn your next sick day into a film marathon with this list of 25+ great movies to watch when you’re sick at home. Whether you watch alone from under a pile of blankets or with a loved one, they’re sure to be just what the doctor ordered.

As the saying goes, laughter can be the best medicine. Escaping into a great comedy is sometimes the best form of relief on a sick day, so try these movies to see which strikes your interest.

This classic is all the more perfect on sick days. This 1986 film is about Ferris Bueller, a high school student who decides to take one last day off before graduation. This day off turns into a wild adventure as his high school principal tries to catch him in the act.

This fairytale adventure-packed love story is framed around a sick day. Told through the eyes of a grandfather reading to his sick grandson, The Princess Bride falls firmly into the sick day genre. With pirates, sword fights, and true love, what could go wrong?

This romantic comedy is guaranteed to warm your heart. Sure, you might tear up a time or two, but you’re guaranteed to laugh along with both the highs and the lows of this movie. Though it takes place during Christmastime, it’s perfect all year long.

Few movies are as heartwarming as Forrest Gump. This story is about a low IQ man who lives his life with unyielding optimism. He falls into adventure after adventure, seemingly by accident, going to war in Vietnam, running across the country, and becoming a shrimping boat captain. Though he works hard, it’s all in the name of love.

5. Back to the Future

Another classic that’s sure to bring the laughs is Back to the Future. This 80’s favorite is perfect for any sick day. With a zany scientist who invents a time-traveling car, this movie proves that a lot can go wrong when you mess with the space-time continuum. Want to keep the fun going? There are three flicks in this series.

This movie is one of the most well-known in the “stupid funny” genre, and that’s what makes it perfect for days when you’re feeling under the weather. When Happy Gilmore discovers he has a talent for golf, he tries to win a big tournament, turning into the most unlikely golf hero.

Based on the famous board game, Clue is guaranteed to have you laughing and questioning along with the characters. This hilarious narrative starts with a dinner party in which the host reveals he’s blackmailing his visitors. When the host ends up dead unexpectedly, the guests work together to find who did it.

Sad or Serious Movies to Watch When You’re Sick

While watching something sad on purpose might not seem like the best get well wishes, it can be a therapeutic process. There’s something healing in letting it all out with a good cry or sad story, so there’s a reason these flicks are so popular for sick days.

If you’re ever in need of a good cry, The Notebook is the film for you. This love story is about a poor young man and a wealthy young woman who fall in love despite the odds. Though they spend much of their life apart, they seem drawn together no matter what. Warning: bring all of the tissues!

Sure, you’re feeling down in the dumps right now, but Groundhog Day proves it could always be worse. This classic in which the main character relieves his worst day on repeat is an important reminder that sickness is only temporary—thankfully!

For something that’s guaranteed to keep you on the edge of your seat for a shocking 3 hours and 30 minutes, Titanic is for you. Part romance, part horrific action film, James Cameron’s award-winning masterpiece shares the love story of a wealthy woman and a poor man aboard the infamous R.M.S. Titanic.

Another great way to spend your day is by watching the entire Harry Potter series. Though there are eight movies total, you can start or stop wherever feels right to you. Harry Potter is a fantasy series about Harry Potter, a wizard chosen to save the world against dark magic.

This 2019 Oscar winner is a film from South Korea. Parasite is about an impoverished family who does what they have to do to survive, slowly but surely overtaking an unsuspecting family’s life. Though it’s full of twists and turns, it leads the viewer to ask who was the real parasite?

For a film that will leave you nostalgic for an experience you’ve never had, Call Me By Your Name is a simple love story that takes place in northern Italy in the 80s. A 17-year-old boy finds himself attracted to his father’s intern who stays with them over the summer. As romance blooms, reality sets in.

14. The Silence of the Lambs

Though not an easy watch by any means, this is sure to have you sitting on the edge of your seat. The Silence of the Lambs is about an FBI student who recruits the help of an infamous serial killer and cannibal to find another violent psychopath.

Documentaries to Watch When You’re Sick

The world of documentaries is wide, and we don’t always have the time or bandwidth to watch these life-changing films. Expand your own horizons with these documentaries that are perfect for watching when you’re sick.

When these identical triplets are separated at birth and adopted by different families, they lead completely different lives. Years later, their reunion takes the world by storm. In Three Identical Strangers, viewers watch as their story comes to life.

The Work is set inside a single room in Folsom Prison. Over the course of a four-day group therapy retreat, each prisoner dives deep into the past to find the root of their violence. Deeply moving and heart-wrenching, this film is a testament to humanity.

High-wire artist Philippe Petit stunned the city of New York in 1974 when he walked on a wire between the towers of the World Trade Center. At over 1000 feet in the air, he made eight passes between the buildings in 45 minutes. This film is also a portrait of the Twin Towers before they fell in the September 11th attack.

This Oscar-nominated documentary is both a film essay and biopic. Narrated by Samuel L. Jackson, I Am Not Your Negro is a glimpse into the Black identity. In a culture that values white supremacy, what is the role of Black identity and who really shapes it?

For a lighthearted documentary, join Jiro Ono, the 85-year-old master chef at his restaurant in Tokyo. As Ono perfects his cuisine, he also looks back on how he got there and what lies ahead with his sons.

20. Dear Zachary: A Letter to a Son About His Father

Last but not least, Dear Zachary is a film that is sure to leave you bawling into an entire box of tissues. Andrew Bagby was murdered by his girlfriend, Shirley Jane Turner, who announced she was pregnant with his child after his death. This film is a visual scrapbook for Bagby’s son to show just how much he was loved by his friends and family, but it turns into so much more.

Whether you’re putting something on for your child or you’re young at heart yourself, these kids’ movies are sure to bring a smile to your face. Kids’ movies truly are for everyone.

This kid-friendly movie is a sick day favorite. This hilarious film is about two overly imaginative boys who spend their days creating a hilarious comic book about Captain Underpants. When they accidentally hypnotize their mean principal into thinking he’s Captain Underpants, chaos ensues.

Though it’s mostly known as a Christmastime flick, Home Alone is also perfect for sick days. When 8-year-old Kevin McCallister’s family leaves on a trip without him, he uses his own skills and quirkiness to fend off burglars during the holidays.

The Incredibles is a Disney Pixar classic all about the power of family and togetherness. This family of superheroes has to learn to work together to take down the bad guys, and they discover what really makes them super along the way.

Another Disney Pixar film worth watching on a sick day is Onward. In this adventure, teenage elf brothers Ian and Barley embark on a quest to spend one more day with their late father. Though some of the obstacles seem impossible, they come together to become an unstoppable team.

This Disney Channel original is a cult classic for a reason. An early 2000’s Greece remake complete with singing basketball players and show-stopping tunes, this musical is perfect for kids and adults alike.

Moana isn’t your typical princess movie. This Polynesian princess ventures out from her home island to search for a mighty demigod who can help her become a master way-finder. Along the way, they meet interesting characters and learn that true strength comes from within.

Last but not least, Shrek is an animated classic that stands the test of time. By turning the stereotypical fairytale upside down, the ogre is the hero who wins the princess in this one. Full of laughs and heart, this is an unexpected favorite for all ages.

Sick days don’t have to get you down when there are so many amazing films to watch. From true love flicks to action-packed adventures, there’s really something for every type of viewer. Using this downtime to expand your film horizons is the best medicine.

What are your go-to sick day favorite films? Add these to your watchlist so you’re always ready to queue up a hit when you’re feeling under the weather.