Choosing the name of your baby or pet may be one of the most important decisions you ever make. Names are like any other words in that they have both connotative and denotative meanings.

The connotative meaning may be based on your personal experiences with another person with that name. It may also be found in popular culture. For example, the names Karen, Alexa, Siri, Mario, Damian, and Barbie all have particular connotations separate from the literal meanings of the words. Sometimes these names have notorious associations for a while, then they quietly disappear.

Before choosing a name, you may also do a bit of research to learn the denotative meanings of the words. Find out their origins and meanings by looking them up in a baby name book or online baby naming sites.

The names we researched, for both humans and pets, have either connotative and denotative ties to death. 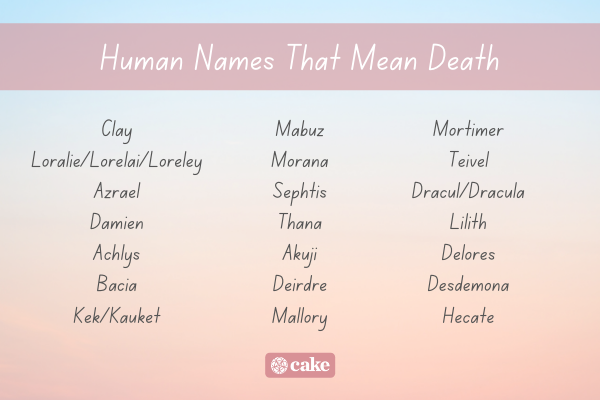 Are you looking for a name that means death, or are you trying to avoid such a name? Regardless of your purpose, here are some names that have ties to the word and idea of death, mortality, or sadness.

You may also consider researching the Greek Gods of death to learn the stories behind some of the most famous death-related names, such as Hades and Thanatos.

The name Clay means “mortal” or “one who is subject to death any moment of his life.”

Although this name’s meaning may shock you, it describes all of us. Perhaps we would all live differently if we were often reminded of the possibility of imminent death.

No matter how you spell it, the name “Lorelai” refers to a beautiful woman who leads a man to death. It may also mean the song that the woman uses to lead a man to his demise.

There is a statue of “Lorelei” along the Rhine River in Germany who was described as a siren who brought death to boatmen who traveled nearby.

This name is of Hebrew origin and means “angel of death.” According to tradition, Azrael is the name of the angel that separates the soul from the body once death has occurred.

The name Damien actually means “to tame” or “subdue,” but the name earned a negative connotation after the movie called “The Omen” gained in popularity. Damien is the name of the Antichrist, or the son of the devil.

The name Achlys originates from the Greek goddess of misery and sadness. Achlys comes from the ancient Greek word meaning “mist” or “darkness.” She is a pale, emaciated figure who often weeps.

You won’t find many personalized toothbrushes with the name “Bacia” on them. This unpopular name is of Ugandan origin and means “family deaths ruined the home.”

In Egyptian mythology, Kek and Kauket form a male/female pairing known as the deities of darkness, obscurity, and night.

Do you want to find a unique name that includes the letter “Z.” If this is the case, consider the Scottish name “Mabuz.” Just be aware that the meaning of this name is “ruler of death castle.”

Morana is the Czech, Slovene, Croatian and Serbian name for the goddess associated with winter’s death. Other versions of this name include Marzanna, Marena, Mara, Morena, and Mora.

Sephtis is usually used as the name for a boy. It’s Persian in origin and means “eternal death.” It also may remind some of the words “septic” or “sepsis.”

Thana means “death.” Thanatos is also a Greek name for the god of death.

Akuji means “dead and awake.” If there is a name with a creepier meaning than that one, let us know.

Technically, Deirdre doesn’t have anything specifically to do with death, but the Celtic and Gaelic name means “sorrowful” or “sad one.”

The Latin root “mal” means “bad” or “evil,” which may have something to do with the meaning of this rather popular name. Mallory means “unfortunate” or “ill-fated,” and could relate to death in meaning.

Walt Disney originally wanted to name his cartoon mouse “Mortimer,” but his wife talked him out of it. Perhaps she knew that the name Mortimer means “dead sea.”

The Latin root “mort” means “death,” and can be found in words like “mortician” and “mortuary.”

The word “teivel” is Yiddish for “devil.”

In case you were considering either of these names for your newborn baby, you might want to know that Dracul means “devil” in Romanian. This name is derived from the Latin word meaning “dragon.” You may also want to read Bram Stoker’s classic with this same name, or you could at least watch one of the movie versions of this book.

The melodic name Lilith has a dark meaning. Lilith is a demonic figure in Jewish folklore. In fact, the word translates to “night monster.”

The name Delores doesn’t have a specific association with death, but it does translate to “lady of sorrows.”

Before you name your daughter Hecate, be aware that this Greek goddess is associated with witchcraft, magic, fierce hounds, and creatures that roam the darkness of night. 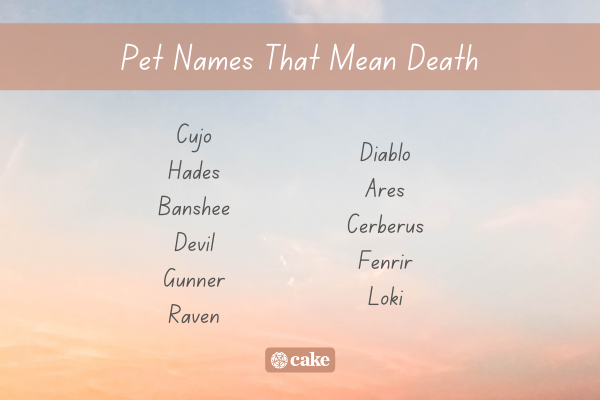 Any of the previous names on our list could also be used for a pet, but check out the list of a few pet-specific names associated with death. If you are looking for a “dark” name for an animal, you may consider naming it for one of the symbols of death or mourning.

Here are death-related pet names that you may consider (or avoid) for your dog, cat, or other pet.

Not a Stephen King fan? You may still know that Cujo represents a terrifying dog.

Hades is the Greek god of the underworld, and you could use it as a name for a tough dog. You may also consider using it as an ironic name if your beloved mutt is a cuddly pushover.

A banshee is a female spirit that wails when death approaches a home. The name is often used in the phrase “wailing like a banshee.”

This pet name needs no explanation.

“Gun” names are trendy in the pet world right now. You may also consider Magnum, Remington, Sniper, or Trigger.

Fans of Edgar Allan Poe may choose to use the name of his classic poem about death as a name for a pet.

Instead of naming your pet “Devil,” you might consider using the Spanish word for devil.

Ares is the bloodthirsty god of war. The name means “ruin.”

Those interested in mythology will recognize the name Cerberus. It is the name of the three-headed dog that guards the entrance to Hades.

J.K. Rowling probably borrowed from Norse mythology when she named her character “Fenrir Greyback.” Fenrir is an evil wolf in ancient stories.

This name has gained in popularity in recent years due to the Marvel character. Loki is a god of mischief.

If you don’t want to share your choice of names with family and friends before your baby is born, at least do a little research on the associated meaning of the word before committing to a final choice.

Learn about the name’s origin and meaning. Look for examples of the name used in literature or on screen. You may also want to search for the full name online to look for any negative associations with that name or names meaning death in the news or throughout history.