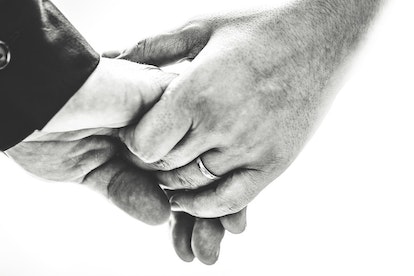 Nearing death awareness is the unique process that a terminally ill person undergoes in the hours or days before dying. As they get closer to death, something in their brain triggers almost hallucinogenic experiences where they feel like they are connecting to the other side.

A dying person experiencing near-death awareness might also see deathbed visions, hearing things, and talking to people only the patient can see. Understanding what happens when you die or are close to death can help make the transition less scary for the patient and their caregivers.

Near-death awareness in hospice and hospital settings is a widespread occurrence, yet there is no scientific explanation of why dying patients undergo this phenomenon. People who have accepted death are more likely to experience this transition in their final days than others.

What Does ‘Nearing Death Awareness Mean?’

Near-death awareness describes a dying person’s experience as their end of life nears. This awareness can include the patient seeing visions, communicating with deceased loved ones, or with persons still alive but who aren’t present.

Deathbed dreams and physically reaching out to touch persons who aren’t there are also part of this complex experience.

A person becoming aware that they’re dying will undergo specific physical and emotional changes as death approaches. The final few days are defined as a phase of unique conscious awareness.

Near-death awareness is not only made up of end-of-life dreams or visions. It’s a more complex part of the dying process as a person transitions from physical life to death. Often, near-death awareness is mistaken for hallucinations or delirium caused by a combination of declining health and cognitive capabilities, alongside the medication a patient is taking.

Patients will have conversations and other interactions with deceased persons known to them whose consciousness has somehow survived physical death. This phenomenon may be a glimpse of what awaits us in the afterlife.

The complicating factor with near-death awareness is that a dying person who experiences these visions can describe their experiences as occurring when they’re fully awake and in clear consciousness. They often report these experiences with clarity, detail, and a great organization of thought.

Where does it come from?

Medical science doesn’t have any substantive proof of why near-death awareness occurs in many patients who are nearing death. Because there’s no medical or scientific backing that can explain where these experiences originate, both medicine and science defer these types of inquiries to spiritual leaders or paranormal researchers for answers.

What Else Happens When the Terminally Ill Are in Their Last Stages Before Death?

As a patient nears death, they may start communicating with others that only they can see. You’ll hear them having regular conversations that make sense only to them. During this time, a terminally ill person who begins to have deathbed communications transitions from life to death. It’s a sign that the end of their life is near.

Although watching someone become weaker and weaker as they prepare to transition can be a traumatic experience, it’s also an opportunity for you to say your final goodbyes. Many physiological changes occur to your loved one’s body and mind as they start shutting down. Changes in appetite and sleeping patterns begin to emerge as the end draws near.  These changes are a normal part of the dying process and shouldn’t be a cause for concern.

As people approach death, they often go through a checklist

A dying person will take stock of their life and begin making mental checklists of all of the things they either accomplished or failed to achieve during their lifetime. They’ll review their experiences in great detail from as far back as they can remember.

Some people place importance on physical beauty, academics, or on material wealth and accumulations. Others place greater value in the relationships they had. For the latter, they’ll consider their accomplishments where their family or romantic relationships are involved.

When nearing death, some dying people also focus on identifying the things they’ve learned throughout their lives and what they’re leaving behind that can be considered their legacy. The disappointment of not reaching all of their life’s goals can trigger death-anxiety and death-related depression.

Forgiveness is a primary concern

Finding and asking for forgiveness are two of the main concerns for the dying patient. Part of what makes up dying a good death is closing up all unfinished business before they die. For many, gaining closure is an integral part of letting go as death approaches. Some of those things patients learn to let go of are:

Forgiveness at the end of life has other benefits for a dying patient. Finding closure and forgiveness reduces their stress levels, lifts their anger and depression and increases their self-esteem. Patients who’ve forgiven or found forgiveness also find hope in their restored relationships and look forward to death once they’ve become aware of it.

How Can You Comfort or Talk to Someone Who’s Experiencing Death Awareness?

When seeking to comfort someone who’s experiencing near-death awareness, remember that they’re experiencing a significant next-step in the dying process. Validating your loved one’s experience and acknowledging these reiterations of what they’re seeing or hearing is vital in minimizing any negative impact of their overall dying experience. Accepting and realizing what’s happening is critical in keeping communication lines open as your loved one nears death.

The following are essential things to consider during a near-death awareness episode:

1. Listen to your loved one

Your loved one may start talking to people who have died before them. Time and space do not exist when experiencing a deathbed vision or other such communication. You may find your loved one talking to their parents or grandparents, a child who has died before them, or even a pet that preceded them in death. Don’t become alarmed when you hear or see this happening. Sometimes there’ll be non-verbal exchanges happening between your loved one and an unseen person.

You don’t have to say anything to them when this happens. You can just observe the exchange or take notes to help you later remember details of their visions and conversations. If you feel compelled to engage with them during one of their episodes, don’t correct or criticize them. Offer gentle guidance in the conversation and listen attentively to what they are saying.

2. Stay by their side

Being present with your loved one at their deathbed may bring you both peace and comfort. You may want to prepare yourself for what you might experience. Some of the things you’ll witness may be uncomfortable or scary to you but rest assured, it’s part of some people’s dying process. Consider reading books about death to help you understand what’s happening.

For many caregivers, this is the part of the dying process that unnerves them the most. Especially when they’re unprepared for what they’re about to witness. You can expect to hear and experience some or all of the following:

Engaging in conversation with your loved one as they’re experiencing near-death awareness is a personal choice you’ll have to make if and when it happens. Consider gently guiding the conversation and asking questions about what they are seeing and who they’re talking to. Ask them who else is present, what they are wearing, what they are saying, and anything else you can come up with to ask.

Accept what they are communicating to you as valid and acknowledge what they’re saying. Never contradict or correct someone who’s experiencing a moment of near-death awareness. You may want to encourage further discussion with your dying loved one if they’re able to communicate with you after their experience ends.

Comforting and talking to someone who’s nearing death awareness involves validating their experiences. Try not to antagonize, correct, or argue with someone who is communicating their experiences to you. You will help a dying person make their final transition by listening to what they’re sharing with you, engaging them in conversation whenever it makes sense, asking gentle questions, and seeking out more information.

Going along with what they’re describing also helps you not feel so anxious and afraid when sitting with your loved one. If they tell you that their deceased brother is coming to pick them up, it’s okay to ask them what time and location. You can even engage them more in the conversation by asking them what they’ll be wearing and at what time they’ll be coming back. You might be amazed at what you learn from encouraging them to tell you more.

When Death Draws Near

Caring for a loved one who’s experiencing near-death awareness while preparing to say goodbye to a dying friend or family member can be one of the hardest things to go through in life.

When your loved one reaches this point in their life, it usually signifies that their death is near. Near-death awareness prepares a person for a peaceful transition into death by giving them comfort and hopes that familiar faces will meet them at the time of their death.