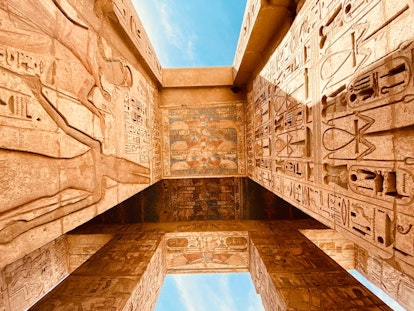 Necropolis vs. cemetery may sound like a superhero movie. Or the location of a secret hideout for said superhero. In either case, these terms won’t be in a new comic book but maybe when you talk about cemeteries and graveyards. You’ve probably heard the term “necropolis” before, but do you really know what it means?

The word necropolis comes from the Greek nekropolis, which means “city of the dead.” They are huge burial locations for the dead, often comprised of elaborate temples with ornate tombs. If this sounds like the pyramids in Egypt to you, you’re right. The ancient pyramids are part of a necropolis where ancient Egyptian burials have taken place.

Necropolises are still in existence, even though they were created thousands of years ago. Here area few examples.

Saqqara is the immense ancient burial ground of Memphis, the capital of Ancient Egypt. Listed as 7 by 1.5 kilometers wide, Archaeology Magazine says it’s “arguably the world’s most elaborate and extensive burial ground.” The necropolis contains thousands of tombs, both large and small. It’s also the area known as the Valley of the Kings due to the high number of Egyptian kings buried there.

The Saqqara Necropolis consists of:

The Pyramid of Giza is the “only surviving wonder of the ancient world” and is also the oldest. It was constructed for Pharaoh Khufu (Cheops) of the Fourth Dynasty and his queen. It’s the largest and probably the best known of the pyramids.

The Step Pyramid is the “first pyramid ever built.” It was created by Imhotep for Third Dynasty ruler Djoser, or Zoser. It reaches 60 meters high and is made of clay sandstone.

Before this first pyramid was constructed, important people were interred in mastabas. These were much, much smaller rectangular, underground tombs. It was Imhotep who thought to stack mastabas to create a pyramid. He wanted to build a tomb truly fit for a king.

The Pyramid of Unas (or Onnos) looks like a large mound of rubble in the desert rather than an actual pyramid. Only a small amount of the original block layers of limestone remain on the south side. Yet humble Unas has great importance in Egyptian history.

Unas is the tomb of the Fifth Dynasty King Userkaf. The inside of the pyramid is surprisingly well-preserved, including the chambers. But it’s the columns that make the pyramid unique. According to The Ancient Egypt Site, they “contain the earliest known example of the so-called Pyramid Texts, and … the oldest collection of religious texts known to mankind.”

Located in Malta is Hal Saflieni Hypogeum, an underground necropolis containing 7,000 human remains. It was used between 4000 B.C. to 2500 B.C. There are three subterranean levels of chambers that were carved into soft, globigerina limestone.

What makes it unique:

The Scavi in Vatican City

While St. Peter’s Basilica is a sight to behold all it’s own, you may be surprised to find out what’s concealed underneath. The Vatican has its own five-story necropolis below the Basilica in the same location where one of the Twelve Apostles of Jesus, Saint Peter, was entombed.

The Scavi, which dates back to the 4th century, wasn’t discovered until 1940. According to Bill De Giulio of WanderWisdom.com, it contains the temple of Emperor Constantine and is the “site of an ancient pagan and Christian cemetery and burial ground from the 1st century.”

Not very many people have seen the Scavi, but it is possible. Tours are given to a very limited number of people per day, but you must plan far in advance for a chance at one of the spots.

There’s a mind-boggling number of gravesites in Wadi-us-Salaam: 5 million. Not surprisingly, it’s the largest cemetery in the world. Najaf itself only has a population of 600,000.

Naxos dates back to the 9th and 8th centuries B.C. (also known as the Geometrical Period). It’s not too far from the town of Tsikalario. The Naxos Necropolis has features including circular tombs and an “ancient, upright-standing stone, known as Menir [which is] considered to be evidence of pre-historic presence of people in the area,” according to Greeka.com.

Simply put, a cemetery is a piece of land set aside for dead people to be buried or interred. That land is reserved specifically for that purpose. But a cemetery is more than just a location to deposit dead bodies. It’s a place of memorialization, reflection, and respect.

The word “cemetery” comes from the Greek word κοιμητήριον, which means "sleeping place." This goes along with the idea of someone “resting in peace” or finding their “final resting place.”

The general concept of cemeteries as places for the dead has been in existence as long as people have lived and died. But the cemetery as a full concept came into its own between the 1830s and 1850s with the advent of the Rural Cemetery Movement.

The Rural Cemetery Movement came about during the Industrial Revolution when cities were growing, industries were booming, and progress was moving faster than a steam locomotive. What resulted was a backlash against the industrial progress. The Victorians re-embraced nature. They wanted to bring nature back to a world of coal smoke and steam engines.

Below are some examples of historically important cemeteries around the world:

In 1863, the Battle of Gettysburg bloodied the field where 10,000 Civil War soldiers would die in the course of three days. More than 3,500 of them were Union soldiers. This battle was not only a turning point in the war but also for the country itself.

It is also, of course, the site of President Abraham Lincoln’s Gettysburg Address, which he gave at the cemetery’s dedication ceremony. So, it’s only fitting that Gettysburg National Cemetery is considered one of the top cemeteries in the world.

Granary Burying Ground is nestled within the city that grew around it. Established in 1660, it’s one of the oldest cities in Boston and contains five victims of the Boston Massacre, and three signers of the Declaration of Independence (Samuel Adams, John Hancock, and Robert Treat Paine).

It is one of the stops along the Freedom Trail, which is marked along the streets for visitors to follow on guided tours or on their own.

This Colonial Era cemetery is located in Old San Juan, Puerto Rico, where the land meets the sea. Dating back to 1836, it’s a combination of memorialization and museum-worthy, marble sculptures.

There are approximately 1,000 graves in the cemetery, including historically prominent Puerto Ricans. It’s a historical landmark and is considered one of the most beautiful cemeteries in the world.

Differences Between a Necropolis and a Cemetery

For one, a necropolis is ancient and can be traced back to centuries ago. The oldest cemeteries in the U.S. only date as far back as the 1600s. There are many older ones around the world, but they are not as old as a necropolis.

Another difference is that a necropolis is huge. Even if you may think some cemeteries can be large like the Gettysburg National Cemetery, a necropolis will usually dwarf them in height. For example, consider the Saqqara Necropolis in Giza and its many pyramids, which are visible at a distance.

Whether you visit a cemetery or a necropolis, both have one important thing in common. Both are places where people can go to pay their respects for the dead.

of these sacred grounds takes us back to different times throughout history where we can honor the past.

If you're looking to read more on famous burial sites, read our guides on the Ming Dynasty Tombs and the Paris Catacombs.