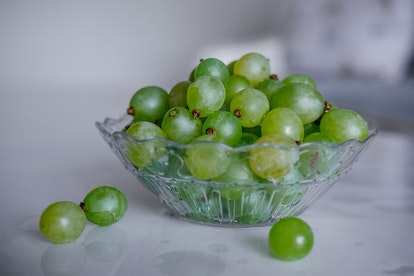 In addition to making resolutions and watching the ball drop at midnight, many cultures around the globe prepare traditional food to celebrate New Year’s Eve.

Whether a country has its New Year’s Eve celebrations on December 31 or another day of the year, there’s a good chance it has a unique treat or savory dish to mark the occasion.

If experiencing New Year’s Eve festivities in different cultures is on your travel bucket list, you might get to enjoy some of these traditional meals.

In Oaxaca and other regions of Mexico, locals celebrate New Year’s Eve by preparing a sweet dish called buñuelos. Buñuelos are crispy fritters, drizzled with syrup and served on a ceramic dish.

The serving dish is important because the key part of the buñuelos tradition happens after you’ve eaten the dessert. If you want a New Year’s Eve wish to come true, you’ll need to smash the ceramic plate against the wall or ceiling.

The tradition of breaking a ceramic dish represents “breaking” with the past and moving on to new things in the year to come.

The people of South Korea consider themselves one year older on the South Korean New Year, rather than on their individual birthdays. And eating a traditional soup called tteoguk is essential to celebrating that new year.

It’s so essential, in fact, that without eating a bowl of tteoguk, a South Korean might not consider themselves a year older at all.

Tteoguk is a hot soup made of broth, rice cakes, and a mixture of meat and veggies. It’s often topped with eggs, spring onions, and roasted seaweed.

In Germany, pigs represent money and good fortune. If you want to have a prosperous and lucky year, you can add pork to your dinner or, alternatively, snack on sugar pigs.

Glücksschweins are small, pig-shaped treats made of sweetened almond paste, and they’re a common New Year’s Eve gift in the nation of Germany.

Iran celebrates its New Year’s celebration, Nowruz, on the spring equinox each year. And one of the main delicacies you can enjoy during Nowruz festivities is a type of frittata called kuku sabzi.

Kuku sabzi is an egg tart or omelet made of eggs and fresh herbs. The herbs symbolize rebirth, while the eggs represent fertility in the new year.

This New Year’s tradition out of Spain involves only fresh fruit, so you can skip the cooking for now.

According to regional tradition, consuming a dozen fresh grapes between midnight and 12:01 A.M. on January 1 (New Year’s Day) grants you 12 wishes.

For each grape you eat, you get to make one wish. As long as you eat all 12 grapes within 60 seconds, you can expect your New Year’s wishes to come true in the next 12 months.

If you fail to eat all 12 grapes within the minute, however, you could bring bad luck upon yourself for the new year. And make sure your grapes are ripe: sweet grapes predict a good year, while sour grapes spell misfortune.

For the Chinese New Year, you can enjoy a traditional dish called tang yuan. Tang yuan is a type of rice dumpling stuffed with sweet fillings, like bean paste and sesame seeds. They can also include nuts or fruit.

Tang yuan are boiled and served in a sweet syrup, which is sometimes ginger-flavored. Tang yuan represents family and coming together.

Lentils are an important New Year’s Eve staple in multiple countries, including Italy and Mexico. In Italy, they serve lentils alongside pork sausage, and the lentils symbolize future prosperity.

In Mexico, some people place lentils on their doorsteps or carry the beans in their pockets to bring about good luck on New Year’s Eve.

This tradition isn’t something you eat, but it does involve food. In El Salvador, there’s a New Year’s Eve tradition of cracking a raw egg into a glass of water one minute before midnight. In the morning, look at the shape of your egg yolk to foreshadow your future year.

Like Germany (and many other countries, as well), Austria recognizes pigs as a good-luck symbol.

To make sure the coming year is a good one, Austrians traditionally serve roasted suckling pig on New Year’s Eve. They call the dish Sylvesterabend after Saint Sylvester.

It’s also common to decorate the table with the sugar pigs described above.

In Turkey, people smash New Year’s pomegranates onto their doorways to foreshadow the year to come.

They hope to see as many seeds burst out of the fruit as possible, as this represents good fortune. The pomegranate seeds represent abundance, fertility, and prosperity for the new year.

They might pair these traditional noodles with other dishes like black beans and herring roe, as well as rolled kelp, shrimp, and rice cakes to complete the meal.

In Poland, many people believe that dining on pickled herring on New Year’s Eve sets the new year off on the right foot.

Polish households often plate pickled herring along with other traditional snacks like meatballs and pate.

This Argentinian New Year’s food tradition is relatively straightforward. If you want to keep the job you have in the new year, or you want to find an even better job, it’s recommended that you eat beans on New Year’s Day.

Any type of beans in any kind of dish will do. But if you want to celebrate New Year’s Eve Argentina-style, you should serve a late dinner to family and friends, and pair your bean dish with some pan dulce (sweet bread rolls).

A Swedish New Year’s Eve feast often features sweet rice pudding. But the Swedes add something extra to this tradition. Inside the rice pudding, it’s customary to hide a single almond.

Whoever finds the almond in the rice pudding can expect to have good luck for the next 12 months.

Traditionally, the Calennig was propped up on three wooden legs to make a unique centerpiece that doubled as a sweet snack. According to Welsh tradition and lore, the shape represents the sun, which is gone in winter. It’s also important to finish your Callenig before noon on New Year’s Day if you don’t want to be called a fool.

Another New Year’s Eve food tradition that involves using the food in an uncommon way is found in Greece. There, it’s traditional to hang an onion on the front door on New Year’s Day.

The onion goes next to a pomegranate, which would have been hung there on Christmas.

If you’re in the mood for comfort food on New Year’s Eve, you’re in luck. In the Southern United States, black-eyed peas represent humility, which in turn brings good fortune for the year to come. The staple’s traditional pairing with collard greens is perfect for a New Year’s celebration, too.

Because collard greens are green in color, they’re thought to represent money. If you prepare and eat black-eyed peas with collard greens on New Year’s Eve, you can expect good fortune and prosperity in the new year.

It may not be food, per se, but whiskey represents New Year’s Eve in Scotland, where the holiday is known as Hogmanay. The holiday traditions of Hogmanay are many, and they last for upwards of two days each year. But at the center of Hogmanay merrymaking is a toast, made with a glass of whiskey.

Family and friends gather around and toast to one another’s health at midnight on January 1st of the new year. They might sing Auld Lang Syne, and they may take part in the tradition known as “first footing,” where neighbors exchange food and drink.

Traditional New Year’s Eve food often plays a larger role than just tasting good. In many cultures, food represents a spiritual connection. For example, in the Thai New Year’s festival of Songkran, families often give food to the monks as an offering.

In other cultures, such as Mexico, traditional food plays an important part in the greater spirit of “out with the old, in with the new.”

Everywhere around the world, food helps bring people together on New Year’s Eve (whether lunar or solar) to wish for good fortune and enjoy time with family and friends.