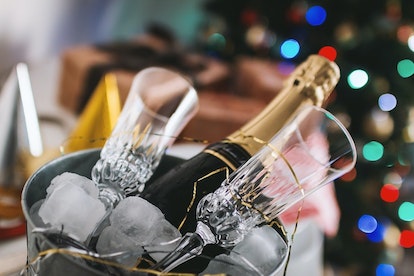 New Year’s Eve is a time of reflection and looking forward. Around the world, people spend New Year’s Eve with family and friends, closing up the old year and ringing in the new. And most of those New Year’s Eve celebrations feature at least one or two special rituals to mark the occasion.

Whether it’s as simple as creating New Year’s resolutions, or as unique as nailing onions to the front door, you have a wide range of options when it comes to New Year’s Eve rituals.

Some New Year's traditions can help you ensure good luck, positive change, and even prosperity in the new year. And even if you don’t necessarily buy into the hype, these rituals are fun to share with family and friends as the clock counts down.

If you want to go above and beyond champagne toasts this New Year’s Eve, there are plenty of unique New Year’s rituals from around the globe.

One of those traditions comes from Spain, where it’s considered good luck to eat a dozen grapes at midnight.

As long as you eat all 12 within 60 seconds (and you don’t come across any sour grapes), you can expect prosperity and good fortune in the new year. You can even make a wish for each grape you eat, for a total of 12 New Year’s Eve wishes.

2. Throw White Flowers Into the Sea

In Brazil, it’s common to visit a shoreline on New Year’s Eve to take part in a unique good-luck ritual. If you happen to be in Rio de Janeiro on December 31, you’ll see countless locals and tourists descend upon the beaches, dressed all in white.

Once there, they’ll light white candles and toss white flowers out into the ocean as fireworks burst overhead. The white flowers and floating candles represent offerings to the Queen of the Ocean, and if you make an offering, the goddess might just grant your New Year’s wishes.

If your offering floats out to see, it’s considered a good sign that your wish was well-received. If it comes back to you, though, you can take that as a sign that the Queen of the Ocean is not pleased. You can improve your chances of pleasing the goddess, as many Brazilians do, by sending your offering out on a tiny toy boat.

3. Invite in a Dark-Haired Visitor

In Scotland, the day before January 1 is called Hogmanay. The New Year’s Eve holiday of Hogmanay comes with many unique rituals, but the most well-known is the traditional called “first-footing.”

According to Scottish lore, you want the first person who crosses the threshold of your home on New Year’s Day to be a dark-haired man. That is, if you want good luck in the coming year.

If you want even better fortune for the year to come, your “first-footer” should come bearing gifts of shortbread, coal, salt, and, of course, whiskey.

It’s believed the first-footing ritual developed after Scotland was invaded by Vikings. At that time, it would have been unfortunate indeed to find an unwelcome fair-haired man on your doorstep. So now, the opposite (a dark-haired man) represents good luck.

But in some regions of Chile, it’s a local tradition to visit the local cemetery for New Year’s Eve mass instead. To celebrate, families often bring food and drink to the cemetery. They might light candles or small fires next to the gravestones of their deceased relatives, too.

Ringing in the New Year at the graveyard might seem macabre, but it allows the people of Chile to celebrate with their deceased loved ones. It’s also thought to bring peace and luck in the new year.

In Ecuador, as well as in other South American countries, people create stuffed dummies and scarecrows made of old clothes and newspaper. They represent año viejo, or “the old year.”

If you visit South America in the week leading up to New Year’s Eve, you might see these dummies sitting on street corners and rooftops. They often look like pop figure icons or politicians who represent the year gone by.

At midnight, it’s considered good luck to light these año viejo dummies to break with the past and make room for good fortune in the new year.

Here’s the perfect New Year’s Eve ritual for anyone who enjoys second-breakfasts and late-night snacks. In Estonia, it’s considered good luck to eat many more than just three meals on New Year’s Eve.

Eating seven, nine, or, preferably, 12 meals on New Year’s Eve is believed to be good luck and bring about good fortune in the new year.

And you don’t have to finish all of your food at every meal to reap the reward of good luck. Part of this Estonian ritual is leaving some food uneaten to share with the spirits of deceased loved ones.

A New Year’s Eve ritual from Denmark involves smashing up as much flatware as you possibly can. But it’s not breaking the dishes that grants good luck in the new year, according to tradition. Your luck in the year to come depends on how many broken plates you find on your doorstep on New Year’s Day.

Neighbors go from door to door, smashing plates on one another’s doorstep. According to the lore of this ritual, the more smashed-up plates you find at your door the next day, the more friends and fortune you can expect to come your way.

Mistletoe isn’t done with its work just because Christmas is over. In Ireland, it’s traditional for single girls and women to place mistletoe under their pillows on New Year’s Eve. But it’s not just ladies that can take part in this unique holiday tradition.

Anyone who’s hoping for good luck in their love life can place a few sprigs of mistletoe under their pillow before they go to sleep on New Year’s Eve. According to tradition, doing so will help you find a future husband or wife. And if you’re low on mistletoe, you can also use any holly or ivy you might have laying around.

In the Philippines, round shapes represent prosperity. After all, coins are shaped just like polka-dots. With this in mind, people surround themselves with round things as the new year approaches, from eating round fruits like oranges to more literal representations like carrying pockets-full of coins.

10. Throw Something Out the Window

Tossing out your old possessions is thought to make room for good luck according to an Italian ritual. If you want to have good fortune in the new year and free up space in your life for new things, you can join in the tradition of throwing furniture out the window.

In Italy, it’s not uncommon for people to throw all sorts of things out of their windows, from small appliances to big pieces of furniture. If something is too large to fit through the window — like an old refrigerator, for example — they might toss it off the balcony, instead.

It’s never a good idea to throw anything out a window or off a balcony that could potentially harm someone. If you want to take part in this ritual, try something smaller, like an old make-up brush or pair of socks.

11. Hang Onions On Your Door

If you want to take the Greek New Year’s eve ritual one step further, you can do what some Greek parents do: tap your children on the head with an onion when the clock strikes 12.

Finally, you can take part in a relatively simple New Year’s Eve ritual with Buddhist origins. Simply ringing a bell at midnight is thought to create good luck and purify the suffering of the previous year.

However, you’ll need to ring the bell a total of 108 times to complete the ritual of Joya no Kane correctly.

Watching the ball drop in Times Square is always an option — whether you can be there in person, or you’re just watching it on TV. But if you want to make this New Year’s Eve even more memorable, you might consider incorporating one or more of the rituals described above.

Even if you don’t fully believe a ritual will help you achieve the life of your dreams, there’s no harm in trying, right?