When looking at financial choices in end-of-life planning, unless you’re a lawyer or familiar with legalese, you’re likely to encounter a few phrases that might stump you. Yes, there’s the dictionary definition or colloquial use of words, but then there’s some that just change depending on the context. Sounds easy, right?

See for yourself how this term is used when addressing your assets after death, and how it can affect financial decisions for your loved ones.

Next of Kin Definition 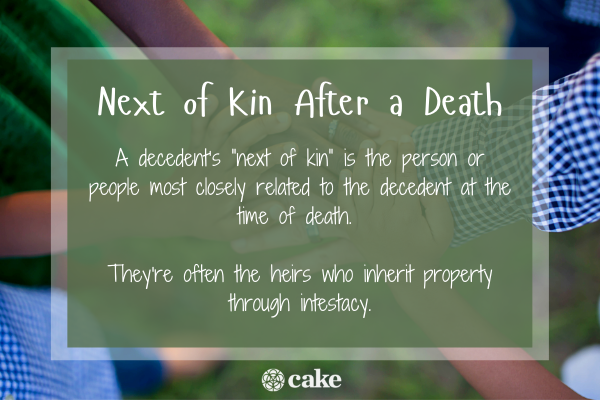 When someone dies, the law will identify their “next of kin” in one of two ways, depending on the legal context and how it is being used. One way is for purposes of distributing the decedent’s property when they die without a last will and testament.

When you die without a will, you are said to have died “intestate.” When you die intestate, your property passes to your heirs through “intestacy” or by “intestate succession.” A decedent’s “next of kin” is that person or class of persons who are most closely related to the decedent at the time of death and often will be the heirs who inherit property through intestacy.

How Next of Kin Works After a Death

How do you determine who’s next of kin?

In the context of intestate succession, any persons who have a legal right to inherit your property when you die are called your legal “heirs.” To be a legal heir, you must be alive at the time of the decedent’s death and be related to the decedent by:

The person related to you by marriage is your spouse. If your spouse is alive when you die, then your spouse qualifies as one of your heirs.

And any person you adopt, who then, legally, becomes your child, qualifies as one of your heirs. For purposes of intestate succession, your adopted children are treated the same as your biological children.

So, anyone who is related to you by blood, marriage, or adoption and is alive when you die qualifies as one of your legal heirs. Anyone who is a legal heir has the right to inherit from you if you die without a will. It does not mean that they necessarily will inherit your property. It just means that they have a right to inherit your property if they qualify under the state’s intestate distribution setup.

What’s the order of next of kin? 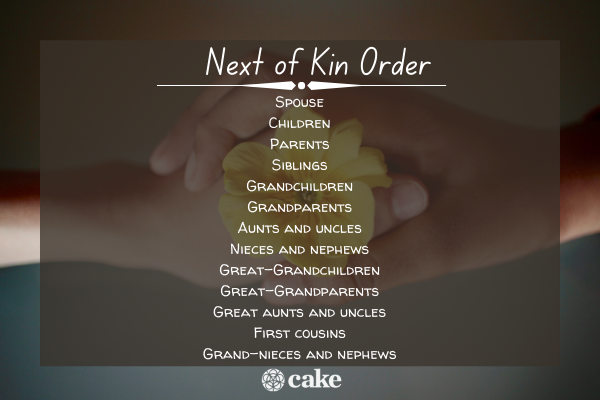 All of your legal heirs (the persons related to you by blood, marriage, or adoption, who are alive when you die and, therefore, have a right to inherit your property) generally fall into a specific category or “class” of heirs based on the nature of their relationship to you, the “decedent.” The common classes of legal heirs are:

However, if you died intestate with no spouse or children who survive you but with one or more parents who survive you, then your living parents would be the first class of heirs to inherit your property.

Whichever class of heirs is the first class in the list of prioritized classes to inherit your property (other than your spouse) is the class that is defined as your “next of kin” for purposes of intestate succession.

In the context of legal decision-making, “next of kin” typically identifies a responsibility that belongs to a specific person. This person is then granted legal authority to make legal decisions on behalf of someone else. This person could be legally responsible in the following situations:

When such a person is unable to make decisions for themselves, authorities will rely on that person’s “next of kin” to indicate that person’s preference for any legal decision that must be made.

Similar to the intestate succession context, most states prioritize the closest relatives who will serve as someone’s “next of kin” for purposes of legal decision-making. They usually are prioritized as follows:

Note, however, that in the context of legal decision-making, the spouse has first priority as “next of kin” but is excluded as next of kin in the context of inheritance. Because of the intestate distribution scheme, every state has separate provisions that protect a spouse’s right to inherit.

Also, in a situation in which a medical professional must make an immediate medical decision that requires legal consent, it may be very impractical to wait to identify an emergency patient’s great-nephew before being able to obtain consent to act.

So if there is not a spouse, adult child, parent, or sibling available to serve as “next of kin,” a person in a close relationship to the patient, such as a close friend, may be allowed to convey the patient’s wishes if they know them.

When someone dies and has a will, their property will get distributed according to their wishes expressed in their will. However, if you die without a will and without declaring how you want your property to be distributed, a state law makes that decision for you.

Every state has a body of law, called the “laws of intestacy” or “intestate laws,” which defines how your property will be distributed when you die if you die without a will.

How do you prove you’re next of kin?

To prove you are next of kin in the context of intestacy, you must confirm to the probate court that you are related to the decedent as part of the class of persons mentioned above who are entitled to inherit from the decedent. You can do this by providing to the court some proof of your relationship to the decedent. This could include:

To prove you are next of kin for purposes of legal decision-making for a decedent, you would need to show sufficient identification as above. If it is needed for a medical decision, the best way to prove you are next of kin would be for the subject to identify you in writing prior to any need for decision-making. In an emergency situation, this is not often possible.

What rights does the next of kin have?

Anyone who is next of kin will have either the right to inherit from a decedent in intestacy or the right to make legal decisions on behalf of a relative or close friend, if a spouse or blood relative cannot be located.

However, state law will usually identify the priority in which a relative may qualify as next of kin and can also limit the rights afforded to the next of kin in each context.

Next of Kin vs. Power of Attorney: What’s the Difference?

A “next of kin” is identified and afforded the authority to make decisions on behalf of a relative according to state law. That law is based on the blood relationship between the person and the next of kin. This particular state law helps to define or identify next of kin out of necessity when someone who dies does not indicate in a will who they want to inherit their property.

Who Is Your Current Next of Kin?

If you were to die or become incapacitated today, who would be your next of kin? Who are your closest living relatives? These are the people who will likely inherit your property if you die without a will. They will also be the people authorized to make legal decisions for you if you do not have a power of attorney or health care directive.

If you do not want your next of kin serving in these capacities on your behalf, consider executing a will, power of attorney, and health care directive to help avoid these kinds of situations.

Now that you're familiar with what a next of kin is, it might be a good time to take the first step and create a will. You can compare the most popular types of attorneys and services below.