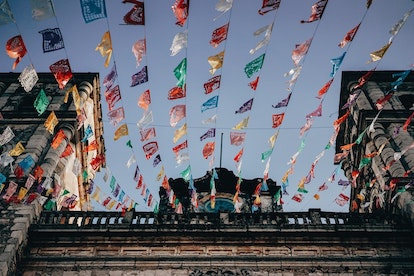 In Latin American communities around the world, neighborhoods join together to celebrate Día de Los Muertos (the Day of the Dead) on November 2. In Santa Ana, California, the annual local festival goes by the name Noche de Altares.

If you’re planning to visit Santa Ana just after Halloween, you should be prepared for the colorful and festive celebration known as the “Night of Altars.”

And if you’re curious about how this Mexican neighborhood joins together to honor the dead, you’ll learn all about it below.

What is Noche de Altares (Night of the Altars)?

Volunteers from across the city come together to create an authentic experience that upholds Mexican Day of the Dead tradition. The cornerstones of Noche de Altares are art, culture, and community.

The Noche de Altares event is organized by El Centro Cultural de Mexico in Santa Ana, California. The cultural center has organized the event since 2002.

The Night of Altars is an extension of the Day of the Dead festivities that happen primarily in Mexico but also take place worldwide.

For families who are separated by the border, the Santa Ana celebration is a vital part of honoring the ancestors. Family members who can’t join their loved ones in Mexico find solace in honoring the dead together with the local community.

Where you can celebrate

The festival is community-driven and put together primarily by volunteers. Local businesses and vendors set up shop, and community members are encouraged to build their own altars.

» MORE: Grief has no expiration date, and neither do your memories. Get your post-loss checklist.

When is Noche de Altares

Noche de Altares happens on November 2 every year. This is the date of the Latin American holiday Día de Los Muertos. It’s also connected to the Catholic holy day, All Souls’ Day.

Día de Los Muertos is the day of the year when families honor their departed loved ones. It takes place primarily in Mexico, but Mexican and Latin American communities worldwide celebrate in their own ways.

All Souls’ Day is the day of the year set aside by the Catholic Church to honor the souls of departed loved ones. Community members who attend the Night of Altars might also take part in religious traditions if they belong to the Catholic Church.

What Happens During Noche de Altares?

What can you expect if you attend Noche de Altares in Santa Ana, CA? Here are some of the traditions and activities that usually take place.

Day of the dead symbology

The first thing you would notice if you attended Noche de Altares is the colorful decor. The city streets are decked out with Day of the Dead colors and symbols, including:

Colorful skulls adorn most Day of the Dead celebrations, including Noche de Altares. According to Day of the Dead tradition, skulls aren’t considered scary or morbid. Instead, they’re a lighthearted reminder that life is cyclical.

Family members even create life-sized skeletons and dress them up as their departed loved ones. That way, the deceased can still attend and enjoy the festivities alongside the living.

In apparent contrast to the macabre images of skulls and skeletons, butterflies also play an important role at any Day of the Dead festival. That’s because the first monarch butterfly arrives in Mexico for the summer around November 1 every year.

The butterflies’ arrival coincides so closely with the Day of the Dead that tradition speculates the two are related. The people of Mexico long ago started believing that monarch butterflies, in fact, carried the souls of the dead.

You’ll also see decorations in a range of bright colors, which each represent a different aspect of the Day of the Dead.

For instance, pink symbolizes the joyous nature of the holiday, while yellow represents light. Purple, on the other hand, stands for grief and mourning.

The main tradition of Noche de Altares, as you might guess from the name, is the tradition of building altars.

Ancestral altars, or ofrendas, are a way for community members to honor their departed loved ones. At the same time, the altars act as a community-building exercise, allowing neighbors to sympathize with one another and share in the human experience of loss.

Altars at Noche de Altares can feature any or all of the following:

The underlying purpose of Day of the Dead and the Noche de Altares festival is paying homage to departed loved ones. Families often place pictures of those loved ones on their altars.

Flowers adorn most Day of the Dead altars, including those at Noche de Altares. You might notice colorful themes, like pink and yellow flowers.

That’s because certain colors represent certain moods or messages that the family wants to convey to the spirits.

Papel de Picado are colorful banners designed with Day of the Dead symbols cut into them. They’re often strung above family altars at Noche de Altares.

Offering tasty treats and drinks to the spirits helps them feel welcomed on Day of the Dead and at Noche de Altares. Families often lay out snacks that the person enjoyed in life.

Lighting candles is a key tradition once the sun starts to set at Noche de Altares. You can observe colorful arrangements of candles on many of the family altars.

Some families display religious symbols, such as a crucifix. This is especially true for families who are also observing All Souls’ Day.

An altar might display a written message, especially if it’s dedicated to a specific social issue. For example, a family who lost a loved one to suicide might display a note saying, “You’re not alone,” and a crisis help phone number.

Symbols and items representing loved ones

Families often put items that represent a departed loved one on their altars. For example, if a deceased uncle loved playing guitar, the family might place a guitar on the ofrenda at Noche de Altares.

Artists lend their abilities to Noche de Altares by helping build family altars, or by decorating the streets. They also set up merchant booths where they can sell their Day of the Dead-themed artwork.

In addition to painting and sculptures, you’ll find musicians performing traditional song and dance. And on the next corner, you might find a face-painting artist offering Day of the Dead skeleton makeup to adults and children alike.

Floral, elaborate dresses are also a typical site at Day of the Dead celebration, as are formal suit pants and jackets (usually white or brightly colored). People might also wear traditional Mexican clothing and hats.

Like any other festival, there’s a big focus on food and drink at Noche de Altares. Specifically, you’ll find vendors offering traditional Day of the Dead treats.

That often includes Pan de Muerto: a traditional sweet bread flavored with orange and imprinted with images of bones. Another festival favorite is Elote: a Mexican version of corn on the cob, garnished and flavored with mayonnaise, cilantro, and spices.

In addition to honoring loved ones who’ve passed, people build altars to spread awareness for social issues. By making an altar related to an issue you hold dear, you’re joining in the spirit of community togetherness.

Sharing ideas and values in this way invites neighbors into your heart and allows for deeper dialog, which is in the spirit of the holiday.

Noche de Altares also acts as a community-wide family reunion. Family members come from across the city, state, and even country lines to honor the sacred day together.

Celebrating the Night of Altars

If you’re visiting Santa Ana, CA on November 2, you can expect to experience the community festival of Noche de Altares. Even if you’re not traveling this November, you can join in the traditions of the Night of Altars at home.

You can invite friends, family, and neighbors over for a Night of Altars, or even host a Noche de Altares-style block party. If that’s not your style, you can build your own altar at home and honor your loved ones in your own way.

No matter how you celebrate the Night of Altars—whether at the Santa Ana celebration or not—you can still take part in the tradition of remembering departed loved ones on November 2.

If you're looking to read more about how people remember the dead around the world, read our guide on the Celtic Hop-tu-Naa tradition.