Music helps us remember important moments., and sometimes it makes us pause and relive that moment. Here are some of the most nostalgic songs of the last five decades:

Nostalgic Songs From the 1970s 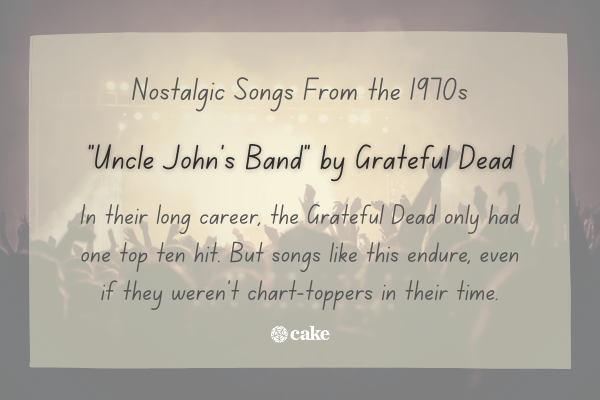 The most iconic songs from the 1970s represent a diverse array of genres. Soul, classic rock and disco are all well-represented in this list.

This disco-soul fusion encourages young people to enjoy their freedom. It’s a timeless message. The song has maintained popularity because every generation of teenagers and young adults appreciate the sentiment.

2. "We Are Family" by Sister Sledge

This R&B-tinged disco tune celebrates the importance and strength of family.

3. "I’ll Take You There" by Staple Singers

This song starts slow before bursting into chaotic, joyful energy. It’s as ageless as Tina Turner herself.

5. "My Sweet Lord" by George Harrison

This gospel-influenced folk-rock song is overtly spiritual. It’s been covered countless times. But no other version touches Harrison’s wistful delivery.

In their long career, the Grateful Dead only had one top ten hit. But songs like this endure, even if they weren’t chart-toppers in their time.

7. "Me and Bobby McGee" by Janis Joplin

Sadly, Janis Joplin died a few days after recording this song. Fifty years later, it remains a rock classic. Joplin’s unique vocal style is showcased in this song. It provides a glimpse into the depths of her talent.

This poignant ballad, written in 1973, remains one of our favorite songs about aging. Most recently it was covered by The Chicks.

The Bee Gees are icons in the disco world. Many of their hits have stayed popular for years, including this one. The beat is so well-known it’s used by CPR training programs to teach the correct cadence for emergency chest compressions.

10. "I Will Survive" by Gloria Gaynor

This song revived Gaynor’s career and became an instant hit. It’s since become an anthem for people facing all kinds of challenges.

Nostalgic Songs From the 1980s

Songs from the 1980s are often recognizable thanks to the unique sounds a synthesizer produces. Many of today’s top artists owe a debt to songs from this era.

The song itself is great, but the music video for it is remarkable. Since the launch of YouTube, the video has been viewed nearly a billion times.

Yes, the title of the song is a little generic. But the earnest lyrics make this a nostalgic romantic standard.

This track was on the movie soundtrack of The Breakfast Club. The lyrics ensure that we’ll never forget this song.

14. "Fight the Power" by Public Enemy

This song was featured on the soundtrack of Spike Lee’s Do the Right Thing. It’s political, and its themes remain relevant today.

Christmas music is always nostalgic. Many artists cover Christmas classics, but this tune created by Run-D.M.C. has been a favorite for over thirty years.

Rock music in the 1980s was often about celebrating excess and debaucherous behavior. But even bad boys have a soft side. The lyrics in this song are surprisingly sweet.

This working-class anthem celebrates the fact that love can get us through even the hardest times.

Madonna had popular singles before this song. But this song's subject matter marked her foray into provocative topics.

Bush had a robust career for such an avant-garde songwriter. This particular song has lived on for decades thanks to many covers. The singer Maxwell does a particularly interesting version.

This song was penned by Gibson when she was still a teenager. It delves into how adults often don’t take the ideas of young people seriously. The subject matter is just as relevant today as it was 30 years ago.

Nostalgic Songs From the 1990s 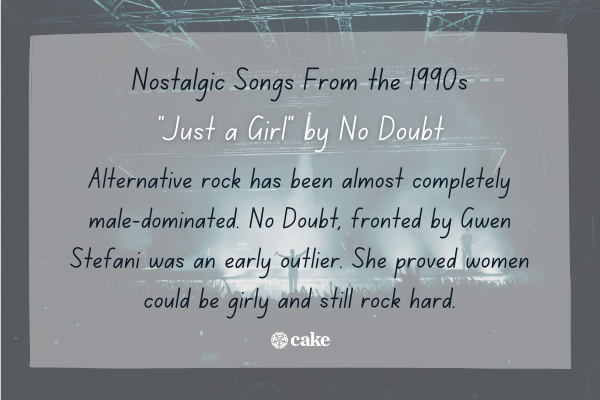 When you think about songs from the nineties, you might think of grunge and punk. Nirvana rose to prominence during this decade. But bubblegum pop acts like The Backstreet Boys and Britney Spears dominated the latter half of the decade.

This song didn’t just launch Nirvana into the stratosphere. It propelled the entire genre of grunge into mainstream music. Many rock songs written in the past three decades owe their success to this track. For many people, this song reminds them of their youth and the energy they felt.

This dreamy alternative rock song touches on topics like reincarnation. It’s not the most well-known song from the 1990s, but it has an interesting message that goes beyond the decade.

Though this song came out over twenty years ago, it still feels fresh. An entire generation learned about “scrubs” from this R&B groove.

The mid-nineties belonged to this rock/jam band group. Though we might want to forget about our fashion choices from this era, songs like this will remain in our memories.

Alternative rock has been almost completely male-dominated. No Doubt, fronted by Gwen Stefani was an early outlier. She proved women could be girly and still rock hard.

27. "I Will Always Love You” by Whitney Houston

You can’t mention nostalgic songs without this one making the list. This cinematic love song also made our list of modern funeral songs.

There were so many teenybopper tracks to choose from in the late nineties. But this one stands head and shoulders above the rest of the field.

Acts like Britney Spears, Christina Aguilera, *NSYNC, and the Backstreet Boys dominated the radio waves. This song, and band, offered something different to music lovers. The video for this pop-punk classic parodied videos by the mainstream artists of the time. It was a silly song that continues to speak to people.

Nostalgic Songs From the 2000s

In the 2000s, it was all about pop music. Rap, hip-hop and even punk often featured pop beats. It made for an eclectic decade of music.

The first time we heard this track, we knew The Killers would be more than a one-hit-wonder. The eighties-influenced synth featured on this track sounds surprisingly fresh and modern.

This breakthrough single from Rihanna was an undeniable bop on its own. But when Tom Holland performed it on LipSync Battle in 2017, it entered icon status.

This was the lead single from Beyoncé's debut solo album. It was clear from the moment it came out that Beyoncé was going to do fine without the other members of Destiny’s Child.

Songs don’t have to be deep to make you nostalgic. We challenge you not to immediately start dancing when this banger comes on.

35. "Wake Me Up When September Ends" by Green Day

This track made our list of songs about losing your dad. Lead singer Billie Joe Armstrong wrote it on the seventh anniversary of his own father’s death. Sometimes nostalgia is a bittersweet memory.

This is one of the rare songs that managed to be nostalgic from the moment of its release. The lyrics encourage listeners to stop standing in the background and go out and experience life.

The emo scene of the mid-2000s was crowded. Fall Out Boy is one of the few bands that managed to find success. They’ve withstood the test of time thanks to intricate lyrics and catchy melodies.

Before Lady Gaga was an Oscar winner, she was a pop superstar. This, her second single, was a worldwide smash. It’s still a catchy jam to play at parties.

This pop gem is always guaranteed to raise spirits. Listen to it, and before long you’ll be shaking it like a Polaroid picture (ask your parents if you don’t know what that is).

Aguilera was part of the pop invasion of the late 1990s. This track from her second album hinted at her ability to outlast that decade.

Nostalgic Songs From the 2010s 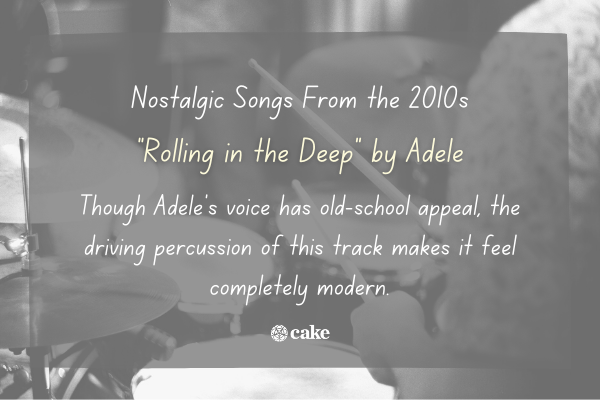 It may be hard to feel nostalgic for songs you were listening to only a year or two ago. But some songs are so iconic you know you’ll be listening to them for the rest of your life.

Before B.o.B. was a flat earther, he was known for crafting inspirational raps with catchy pop hooks.

This pop-rock single touts the importance of perseverance in matters of the heart.

While we loved Ke$ha’s early party-girl anthems, this personal song marked a new start for the singer. Its slower pace allows the singer to showcase her phenomenal vocal range.

44. "Someone You Loved" by Lewis Capaldi

This Grammy-nominated track is one of our favorite songs about missing someone. It came out less than two years ago, but it’s an instant classic.

There was no escaping this sugary pop confection. Even now, we can sing it by heart.

46. "We Are Young" by fun. featuring Janelle Monáe

This pop gem perfectly encapsulates those hazy nights we all had. It might remind you of closing down the bar with your friends or watching the sunrise after a long night studying. Whatever it reminds you of, it’ll leave you feeling nostalgic for days gone by.

Though Adele’s voice has old-school appeal, the driving percussion of this track makes it feel completely modern. The genre-crossing appeal of this song means it has been sampled and performed by artists from across the musical spectrum.

The soaring vocals on this track can lift your spirits, even though the subject matter is surprisingly somber.

Most people think of My Chemical Romance as a dark and dour band. But this pop-rock track manages to be uplifting even with its political message.

Everyone has songs that make them nostalgic. No matter what you’re going through in life, a song has the power to lift your spirits. The songs on this list might make you miss your college friends, or your middle school math class. Whatever they remind you of, take a moment to reminisce.

You can celebrate all the great moments you shared with these songs. And look forward to the new memories you’ll create, too.