You might feel intimidated if you don’t know how to write an obituary and you find yourself faced with this unfortunate task.

You may struggle to put your feelings into words after coping with a loved one’s passing. If so, keep in mind that you don’t need to rely solely on your own words. You can use popular obituary sayings or quotes to put the finishing touches on an obituary.

Consider these examples. The following obituary sayings may be exactly what you’re looking for.

Obituary Sayings or Quotes for Parents and Grandparents

Honor a lost parent or grandparent with such obituary sayings as:

1. “And when great souls die, after a period peace blooms.”

This Maya Angelou line sums up the way many feel about lost parents or grandparents.

This alternative to “Rest in Peace” is particularly popular among marginalized groups, such as members of the Black and LGBTQ+ communities. You could use it in an obituary for a grandparent or parent who struggled against injustice.

Some agnostics and atheists prefer this common alternative to “rest in peace” because they feel it has a less spiritual connotation. You can use it in the obituary of anyone who was an atheist or agnostic.

This simple but sweet line from the poem “Legacy of Love” offers an ideal obituary saying for a grandmother.

5. “because my Father lived his soul, love is the whole and more than all”

E.E. Cummings gave us this quote that may help you complete a father’s obituary.

It may be a simple sentiment, but it’s a popular obituary saying and grief quote because of its relatability.

This quote from Haruki Murakami may remind some that a grandparent’s death was merely part of a long and fruitful life.

Obituary Sayings or Quotes for Children or Babies

Although writing a child’s obituary is never easy, these obituary sayings may help in some way:

Many grieving parents choose to use these lines from “The Little Prince” as an obituary saying.

9. “Let your children be as so many flowers, borrowed from God. If the flowers die or wither, thank God for a summer loan of them.”

You may include this comforting Samuel Rutherford quote in an obituary if you find peace in religion.

10. “We’ll always treasure the brief time we had with you.”

This obituary saying essentially expresses the same sentiment as the quote above but without the religious connotation.

Obituary sayings such as this highlight the playful and joyful spirits of children. They may also express the hope that a lost child continues to live on somewhere.

This quote from an unknown source often appears on memorial keepsakes for deceased children.

13. “Good night, sweet prince, and flights of angels sing thee to thy rest.”

This classic line from “Hamlet” is a common child’s obituary saying.

This Helen Keller quote may serve as an obituary saying that summarizes the confusion parents often feel after the seemingly senseless passing of a child.

Obituary Sayings or Quotes for Siblings

Let everyone know how much a lost sibling meant to you with obituary sayings like these.

This is the inspirational final line of a poem that compares the loss of a family member to a link in a chain breaking.

You might use this Emily Dickinson quote in an honest obituary for a lost sister, expressing the grief you feel in her absence.

17. “Four sisters, parted for an hour/None lost, one only gone before/Made by love’s immortal power/Nearest and dearest evermore.”

Consider these lines from Louisa May Alcott if you’d prefer your sister’s obituary be inspirational and hopeful.

18. “I had a brother who was my saviour, made my childhood bearable.”

This Maurice Sendak quote could help you celebrate a beloved brother if you’re trying to find the right words to express your appreciation for the role he played in your life.

19. “You can shed tears that she is gone, or you can smile because she has lived.”

Use this line from a David Hawkins poem to offer mourners comfort after a sister’s death.

This simple quote from Astrid Alauda may perfectly express your feelings for a lost brother.

21. “But brothers can never be parted, precious memories never die.”

These short but powerful lines are from a popular funeral poem of unknown origins. 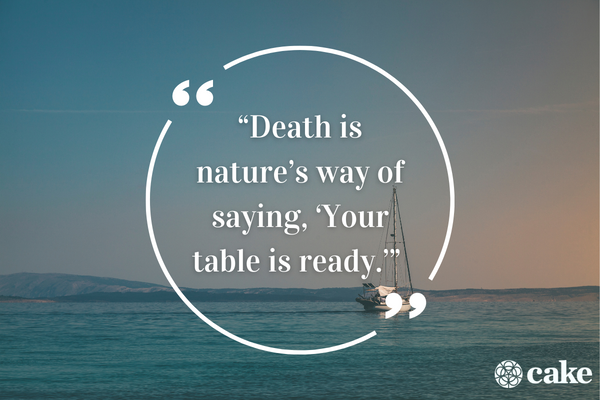 Obituaries don’t need to be somber! Funny obituaries can fit the situation. To add some humor to an obituary you’re writing, consider using one of these obituary sayings:

Robin Williams offered this line that proved he could make just about any topic a source of laughs.

23. “I am prepared to meet my maker. Whether my maker is prepared for the great ordeal of meeting me is another matter.”

This Winston Churchill quote may not be an ideal obituary saying in all contexts, but if you’re writing the obituary of someone who had a lovably intense personality in some way, it could offer a funny way of starting or ending the obituary.

24. “The reports of my death have been greatly exaggerated.”

As long as you’re sure no one will get the wrong impression, thinking you’re claiming the deceased is actually still alive, this Mark Twain quote can humorously imply that a person’s spirit still lives on.

25. “He was a great patriot, a humanitarian, a loyal friend... provided, of course, that he really is dead.”

This Voltaire quote is ideal for an obituary of someone who had a healthy sense of humor.

Sometimes funny obituary sayings can take the form of inside jokes. Some might not read this line as humorous, but others might recognize it as a line from “Ghostbusters 2.”

That’s just one example. If the deceased was a big fan of a funny movie or show, slyly including a quote about death from that show could be a subtle way to add humor to the obituary.

Katharine Hepburn’s quick wit could also inject some levity into an obituary.

28. “Always go to other people's funerals, otherwise they won't come to yours.”

You might include this Yogi Berra quote in an obituary as a subtle but funny way to encourage people to attend a loved one’s funeral. 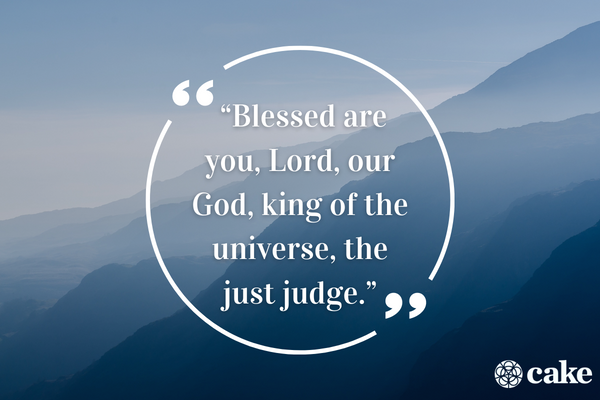 Religious obituary sayings are easy to find. These are a few noteworthy examples:

29. “For our light and momentary troubles are achieving for us an eternal glory that far outweighs them all.”

Use this passage from Corinthians if you’re writing the obituary of a devout Christian who struggled in some way in life.

This is a translation of a Hebrew saying you might hear at some Jewish funerals. However, because it emphasizes the belief that a higher power has an ultimate plan, even when we can’t make sense of it, you might also consider using it as a Jewish obituary saying.

31. “Every soul will taste death, and you will only be given your [full] compensation on the Day of Resurrection. So he who is drawn away from the fire and admitted to paradise has attained [his desire]. And what is the life of this world except for the enjoyment of delusion.”

Consider using this passage from the Quran to remind mourners that according to the Muslim faith, the end of a person’s life on Earth isn’t the final end.

32. “Don’t be afraid to cry. It will free your mind from sorrowful thoughts.”

You may include this Hopi proverb in an obituary to let mourners know there’s nothing wrong with expressing grief during a difficult time.

33. “Life is a series of natural and spontaneous changes. Don’t resist them. That only creates sorrow.”

For a Taoist obituary, this Lao Tzu quote could highlight that death is simply one of life’s natural changes.

34. “Even death is not to be feared by one who has lived wisely.”

This Buddhist saying is simple but also inspirational.

This line from Psalm 23 could serve two purposes as a Christian obituary saying. It could suggest that the deceased soul is now traveling up to heaven, while also suggesting that mourners can find strength in their faith.

Obituary Sayings: The Right Words at the Right Time

Remember, not every single word in an obituary has to come from your own creativity. On the contrary, it’s actually very common for people to include traditional quotes or sayings in obituaries. These are just a few examples to consider.