No matter how many new songs come out, many of us are still tied to the songs of our childhood, or of the teenage years when we went out dancing or listened to records with friends.

Here are just a few of the wonderful songs that turn back the clock for many of us. You might uncover a new favorite among these time-traveling hits.

Oldies Music from the 30s 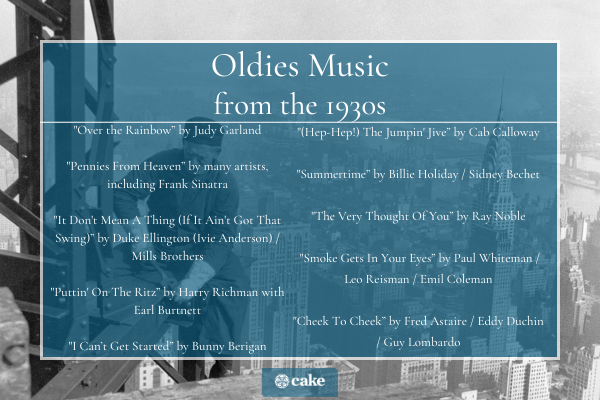 The 30s featured fun and upbeat music from the start of the jazz and swing movements around the United States, reminding people of dancing the night away.

1. "Over the Rainbow” by Judy Garland

This song came to popularity as the most famous track from The Wizard of Oz.

2. "Pennies From Heaven” by many artists, including Frank Sinatra

The fun visuals of this song connect with the idea of money falling from the skies. During a time when few in the United States had enough money, this daydream was a welcome diversion from the hard times.

3. "It Don't Mean A Thing (If It Ain't Got That Swing)” by Duke Ellington (Ivie Anderson) / Mills Brothers

The swing dance scene and the swing music scene all got their start in the 20s, but came to true popularity in the 30s.

4. "Puttin' On The Ritz” by Harry Richman with Earl Burtnett

This jazzy and fabulous tune has been featured in so many elements of pop culture that even those who weren’t around in the 1930s will recognize its beat.

5. "I Can’t Get Started” by Bunny Berigan

The mournful crooning of an unsuccessful suitor will still move hearts decades later.

Listening to Cab Calloway’s hit is sure to make you nostalgic for the big band days.

People still love Billie’s long opening notes about how in Summertime ‘the living is easy.’

8. "The Very Thought Of You” by Ray Noble

This song will get quite a few people misty-eyed; it’s a nostalgic hit especially when you’re missing someone.

9. "Smoke Gets In Your Eyes” by Paul Whiteman / Leo Reisman / Emil Coleman

Another perfect sad and sweet song, perfect for a slow dance.

Oldies Music from the 40s 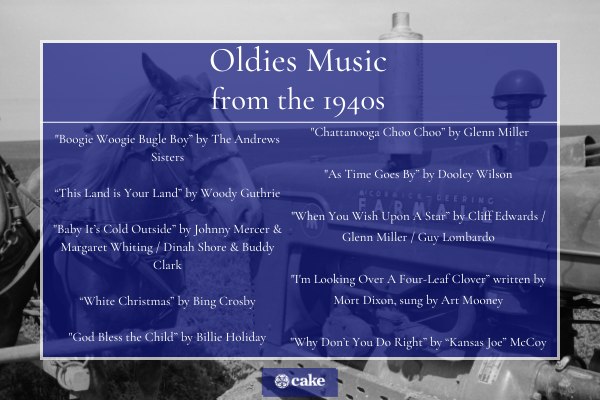 The 40s featured carryovers of great jazz and swing music from the 30s, but also featured a few references to World War II and a few new genres that would grow in popularity in future decades.

This peppy song includes references to soldiers, important at the time given the fact that the 40s were the height of World War II, and it influenced nearly every element of life.

12. “This Land is Your Land” by Woody Guthrie

This song has become a patriotic favorite for many United States citizens.

The famous Christmas song got its start back in the 40s.

There might be no better big-band/swing song to cut a rug to than this old-fashioned favorite.

“And when two lovers woo, they still say I love you… the fundamental things apply, as time goes by” became even more famous when played in the hit movie Casablanca.

18. "When You Wish Upon A Star” by Cliff Edwards / Glenn Miller / Guy Lombardo

“When You Wish Upon A Star” was a hit song written for the Disney animated movie Pinocchio, which was released in 1940.

This song became a well-known song from the late 20s before Art Mooney brought it to 40s fame.

This song has become a jazz/blues standard and has been covered by many female blues singers.

Oldies Music from the 50s 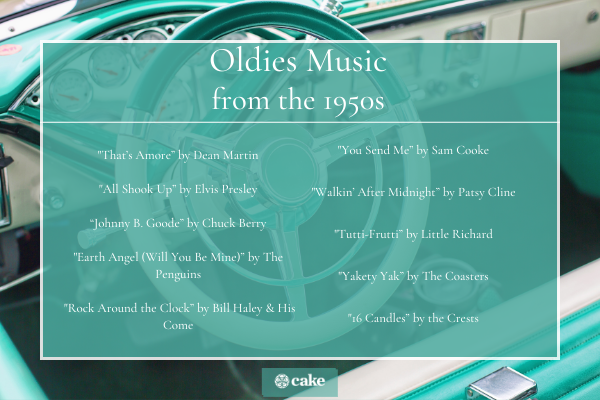 The 50s, including many of the first hits of the rock-and-roll age, offers a wide variety of fun tunes to break out at the sock hop or while jitterbugging.

With Italian references and an old-world feel, this song will remind you of when love has ‘hit your eye like a big pizza pie.’

Presley’s famous presence on stage was accompanied by the kind of hip-shaking dancing that goes well with songs like “All Shook Up.”

This fast-paced, peppy song is sure to get reluctant dancers out of their seats.

The Penguins crooned their way into U.S. hearts with this song, which would go on to be covered multiple times.

25. "Rock Around the Clock” by Bill Haley & His Comets

This is a fun boogie song recognizable to many from decades of play on the radio.

With simple lyrics and smooth vocals, Sam Cooke is one of many 50s singers to croon his way onto the list of the best slow dances ever.

27. "Walkin’ After Midnight” by Patsy Cline

Dramatic and passionate, this song is a great example of Patsy’s abilities as a vocal artist.

Fast-paced, silly, and fun, The Coasters’ goofy song about getting things done around the house will definitely get stuck in your head.

A great song for a sweet sixteen, this song gained popularity in 1958.

Oldies Music from the 60s 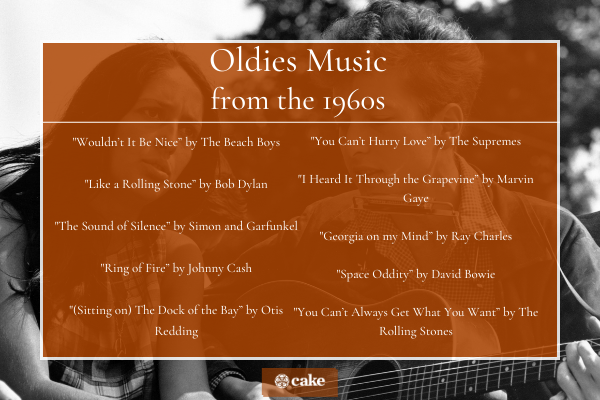 The psychedelic 60s saw new favorites in the rock-and-roll genre of music, as well as new mega-bands that would remain popular for decades to come.

The Beach Boys really set the mood for 60s beach music and established the subgenre of surf rock. Both are now popular genres for cover bands to this day.

Bob Dylan’s unique and emotional form of folk-rock has become legendary over the decades.

33. "The Sound of Silence” by Simon and Garfunkel

This pensive song leads in with the iconic phrase, ‘hello, darkness, my old friend...” Many might remember this song from the movie The Graduate.

Cash’s deep bass vocals really make an appearance in his performances of this song.

This Otis Redding favorite is the perfect relaxation song when out by a quiet body of water.

The famous lines, “you can’t hurry love/oh, you’ve just got to wait/love don’t come easy/it’s a game of give and take” are a good life lesson as well as a catchy tune.

37. "I Heard It Through the Grapevine” by Marvin Gaye

Marvin Gaye’s entire songbook is well-known, but this one is even more noticeable, about finding out someone is about to move on through rumors rather than a straightforward chat.

Fans of the South will love this sweet, official song of the state of Georgia.

Starting with “Ground control to Major Tom,” this story-based song is really a great example of how David Bowie and his alter ego Ziggy Stardust influenced pop culture.

40. "You Can’t Always Get What You Want” by The Rolling Stones

With both a very key lesson and a driving beat, The Rolling Stones definitely made history with this and their other famous songs.

Oldies Music from the 70s 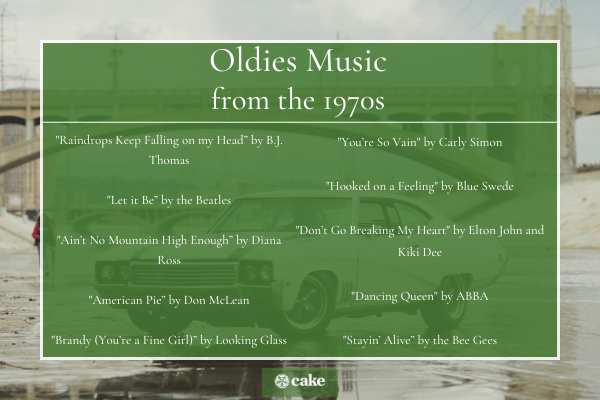 Groovy 70s hits, be they disco or otherwise, are sure to bring a head-bob out and make you tap your foot to the beat.

41. "Raindrops Keep Falling on my Head” by B.J. Thomas

The singer in this bouncy song keeps his chin up during the tough times, which many of us can relate to. It was also covered by Ben Folds Five later on in the early 2000s.

This cozy and soothing song has encouraged people to let go of their worries for half a decade and has gained a timeless status.

A story of persistence wrapped up in powerful female vocals, Diana Ross’ song is one for the history books.

A poignant contribution after the loss of two close friends in a tragic plane crash, American Pie has become one of the 20th century’s most recognizable ballads.

This song will get stuck in your head and isn’t a bad option for karaoke, especially if your friend Brandy is in the audience.

This is a great song to sing loudly at karaoke, belting out, “you probably think this song is about you!” Only one person knows who this song is actually about, to this day. Is it you?

This song has always been popular, but when it was featured in the recent film Guardians of the Galaxy, many people also rediscovered it.

This sweet duet is a great favorite from legendary Elton John.

This song has been covered by many other groups, but no one does the Dancing Queen justice quite like ABBA.

The twangy beat is recognizable from the very first chords of this fun disco favorite.

Whether you love the swing of the 30s or the disco of the 70s, there’s something for everyone to enjoy among popular Oldies hits. Whether you want to connect with a relative, remember cherished times with those who have passed away, or simply put a smile on your face, a good Oldies song will bring to mind the past in a moment. Just wait for those first strains of familiar melodies and you’ll be taken back to the 30s, 40s, 50s, 60s, or 70s by the music.

Cake is an excellent resource for more than just music from the past; there are a variety of end-of-life planning tools that can help you leave your family prepared. Register today!