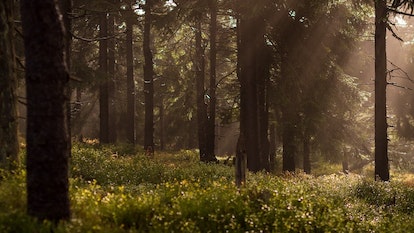 Rooted in the ancient agrarian lifestyles, pagans around the globe hold great reverence for the powers of nature, women, and many deities. Pagan religions are known to have existed longer than Judaism, Christianity, or Hinduism. They’ve been around for as long as 10 or 15 thousand years.

The first recorded existence of pagan religions is in the works of Bede the Venerable who was a monk that lived around 735 AD. This was approximately the same era as Caedmon’s Dream of the Rood, which marks the earliest known mention of Christ in Old English literature.

Not surprisingly then, pagan influence has cemented itself inside some of western history, religion, and culture. Certain days of the week (Tuesday, Wednesday, Thursday, and Friday) are named for Heathen gods.

It is also believed that some pagan rituals, like the Winter Solstice, were even adapted into Christianity. Even with the pejorative labels, judgment and fear attached Paganism has persisted. Despite this, so have their funeral customs.

Pagan View on Life and Death

Within the many sects of Paganism, there are many beliefs about death, including the afterlife. Yet, life and death are eternally woven together, no matter the belief.

Unlike Christianity, Heathens believe in a great hall (or halls) where people go after they die. They don't believe in reincarnation or anything close to Christianity's view of heaven. Nor do they spend too much time mourning death as in other religions. Instead, they choose to celebrate life which was lived.

Druidry, much like Heathenism, holds a reverence for (Mother) nature. Here, Druidry becomes even more distinct. The geography where one lives also brings diversity to the religion. Whether you live in a temperate rainforest or an oak savanna, with the changes in topography come changes in the gods celebrated.

Like Druidry and Heathenism, both Shamanism and Wicca believe in the transformative powers of nature. Shamanism heals by working with the spirits within nature, whereas Wicca heals by utilizing the gifts granted by nature itself.

The difference is that Shamanism is isolationist and tribal, while Wiccan beings share some beliefs with the spiritually minded. Both are dogmatic.

Hellenism, like the aforementioned pagan spiritualities, is also polytheistic. The divergence here is that one will discover a reverence for the gods of ancient Greece instead of one in nature.

Hellenists align themselves with philosophers—like Socrates, Plato, and Aristotle. Their goal is to achieve civility and a higher mentality.

Unlike most religions, Hellenistic Gods are tangible; they are present in daily life. Hellenists believe that they possess an eternal soul, which allows for an eternal afterlife whether through reincarnation or by sharing a table inside the halls and realm of the gods.

Upon death, pagan spirits travel to the afterlife. They may reach Summerland, or the Otherworld—places of eternal youth, health, and abundance.

Others believe that they are reincarnated, which is a belief not only found in Hinduism but also believed to be of great influence on Roman thought. Still, others believe they will eternally feast with the gods in the great halls, while others may succumb to the dark Underworld, ruled by Hades.

Various interpretations of funeral ceremonies exist among pagan religions, but the themes are similar. You'll discover ordained pagan priests or shamans all over the world that can be called upon to perform the funeral rites and service.

Each one is unique to their religion or spirituality. Here are a few things to expect at a funeral:

Many funeral services will be held outside, but considerations will be made for inclement weather and decorations. When the officiant conducts the service, you can be sure that the ceremony will revolve around both nature and the environment to represent the cycle of life.

Additionally, astrological signs, Zodiac elements (earth, air, fire, and water), ruling planets (i.e. Saturn or Pluto), or seasons (Spring, Summer, Fall, and Winter) might be represented in some way. Considerations for particular gods and goddesses may also be honored and worshipped.

COVID-19 tip: If you're planning a virtual Pagan funeral using a service like GatheringUs, you can still adapt many of these rituals for an online ceremony. Brainstorm with your funeral director or event planner to help you figure out the logistics or any limitations.

Of course, depending on the specifics of the deceased beliefs, each funeral will be different. However, if you've never been to a pagan funeral before, here are some general practices you might expect:

Goddesses and gods may be invoked to ask for blessings, thanksgivings, and to honor the decedent. Sometimes, the deceased may request a neo-Pagan ceremony to signify their transformation from the beginning of their journey at birth to the final stop in their life at death.

You may hear readings from pagan sources such as the Egyptian Book of the Dead, the Prose Edda, the Mabinogion, the Book of Shadows, or the Carmina Gadelica.

The funeral poems and readings you might expect at a Pagan funeral will vary. They may resonate in terms of goddesses and gods, spirits or guides, even loved ones who have already passed, as in the Samhain celebration. The two examples below offer reverence for Nature and also one for the god Osiris.

From the Book of Shadows. "For I am the Soul of Nature, who giveth life to the universe; from me, all things proceed, and unto me must all things return; and before my face, beloved of gods and mortals, thine inmost divine self shall be unfolded in the rapture of infinite joy."

From the Egyptian Book of the Dead. For the god Osiris, "Thy crown penetrateth the height of heaven, thou art the companion of the stars, and the guide of every god. Thou art beneficent in decree and speech, the favoured one of the Great Company of the Gods, and the beloved of the Little Company of the Gods."

Funeral rites vary widely among spiritual beliefs. Death gods and goddesses are also revered and honored rather than feared, expecting a certain kind of punishment.

For example, Norse pagans may celebrate with additions of Viking traditions, paying honors to Odin and the kingdom of Valhalla. Wiccans will continue to celebrate the lives of deceased loved ones at the Witches New Year, or Samhain.

Hellenists may celebrate Persephone, who lives with Hades six months of every year, bringing brightness into darkness. They may also honor Hecate, who is the gatekeeper to the Underworld.

Both flowers and, in particular, live plants have special meanings to pagans. If you are wondering what to bring or send, opt for a live plant whenever possible. Listed here are a few flowers and plants and their meanings so that you can make the right choice for funeral flowers.

Preparation for the burial of the decedent includes:

Afterward, the decedent's funeral will likely include a green burial to be as eco-friendly as possible. Or cremation if they’ve chosen to have their ashes scattered in nature instead.

Pagan burial customs are finalized only when the soul is released from the body or the grave, summoning a rebirth. This starts the day before the decedent's first birthday, following their death. The ritual continues:

What to Expect at a Pagan Funeral

If you have not attended a pagan funeral before, you'll discover a lot of ancient rites and rituals. These are steeped in ancient traditions with reverence for the gods, nature, and the celebration of life.

Every religion has its unique rituals and beliefs. The many pagan religions are no exception, so consider doing some more research if you’re attending a pagan funeral soon. Hopefully, this has been a helpful start.