You can do a number of things to support a grieving family at a funeral, like bringing flowers, sending a sympathy card, and attending the viewing or wake.

But, being a pallbearer holds a similar—if not, more significant—role in a funeral service. Let's explore what a pallbearer is, their duties, and tips for first-time pallbearers.

What Is a Pallbearer? 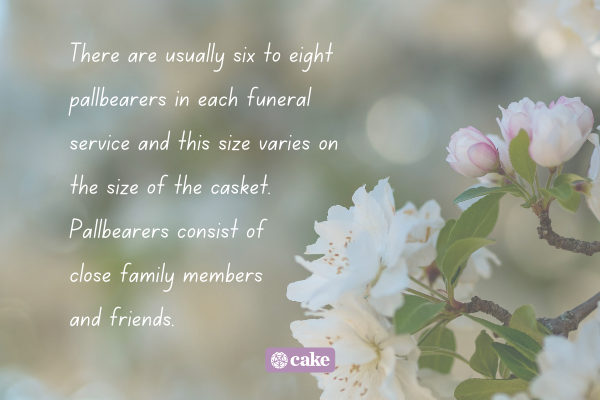 A pallbearer is a person who assists in carrying a casket during a traditional funeral or burial. A pallbearer role is most common in Catholic and Christian funerals. However, pallbearers are also present in Jewish funeral ceremonies, too.

There are usually six to eight pallbearers in each funeral service and this size varies on the size of the casket. Pallbearers consist of close family members and friends. A pallbearer is either chosen by the deceased in pre-death planning or by the family after.

They can be men and women usually over the age of 16. When asked to be a pallbearer, it's an honor and very few people decline this request.

Pallbearers play a crucial role in the funeral service, as they're in the public eye. If you've been asked to be a pallbearer and too emotional, you might want to decline the offer.

They are not only bearing the physical weight, but they bear the emotional weight as well. It's a great honor to serve as pallbearer but it's not a role for everyone.

The term pallbearer comes from the word pall, which is a heavy cloth used to cover a casket. If a person is carrying a coffin covered will a pall, then they're "bearing the pall." In the Middle Ages, pallbearers would hold the four corners of the pall while other men lifted the casket.

What Are a Pallbearer’s Duties? 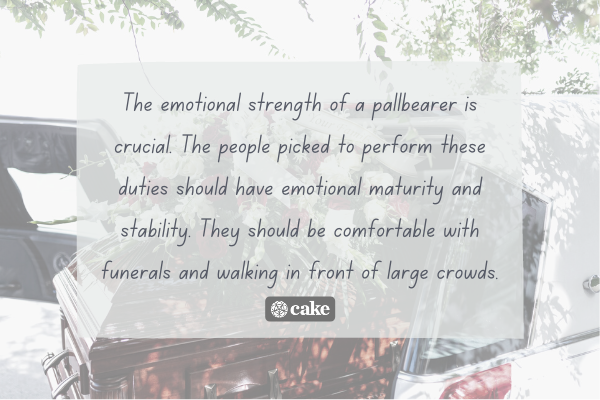 A pallbearer is a key part of the ceremonial procession into the church service and to the gravesite. They must carry the casket with strength and reverence. They'll usually meet at the funeral home after the family says their final goodbyes.

Once the family exits the funeral home, the pallbearers will lift the casket onto a church truck. This device is on wheels and folds down when placed inside of the hearse.

Once the casket is secure in the hearse, the pallbearers will join the funeral procession. They often ride in a special car or limousine so they can meet the casket as soon as it arrives at the gravesite. This vehicle drives immediately behind the hearse and the other vehicles following behind.

At the funeral service or mass, the pallbearers will carry the casket down the aisle and to the front of the church. If the service is Christian or Catholic, a priest or religious leader may bless the casket at the entrance of the church.

Funeral songs or religious hymns are often played during this time. The immediate family will walk in front of or behind the casket in the procession. It's symbolic for them to walk in with the casket as others bow and offer their prayers and condolences.

The casket is not lowered to the ground by the pallbearers. At the end of the service, the funeral director and staff are in charge of lowering the casket. At the graveside, the role of the pallbearer comes to a close and they sit or stand to join their family and friends.

Again, the emotional strength of a pallbearer is crucial. The people picked to perform these duties should have emotional maturity and stability. They should be comfortable with funerals and walking in front of large crowds.

Are Pallbearers Necessary at Every Funeral?

Though pallbearers are common at funerals, there are some cases where they may not be needed. If the deceased person isn't buried and has a celebration of life, there may not be a need for a pallbearer.

If a family still wants to recognize this tradition, alternative options are available. Close friends or family members can act as honorary pallbearers and carry a photo or memory box.

In some funerals, close family or friends may not feel prepared for this role. If no one is up for the task, they may opt for the funeral home to provide people to carry the casket. In this case, family members might invite honorary pallbearers or skip this tradition.

How Do I Pick a Pallbearer?

If you plan to have pallbearers, you'll want to think of family members or friends who were close to the deceased. The people you select should be in good physical health to lift a casket.

If they're unable to lift the weight, you may consider making them honorary pallbearers. Their presence will have an impact regardless if they lift or carry the casket.

You might want to ask family members for help with selecting the pallbearers. Be sure to ask if anyone has any concerns before asking them to commit. Let them know that you understand if they have to decline and that you appreciate them either way.

When you ask someone to consider this role at the funeral, give them as much detail as possible. You will want to convey that they will need to arrive early and be dependable.

How Should a Pallbearer Behave?

Pallbearers commit to serving in a big way and they should always remember why they are there. Their role is to keep the casket safe and deliver it from the funeral service to its final resting spot.

A pallbearer should be respectful and approach their role with dignity and grace. The best pallbearer is someone who can listen and take directions well. A good pallbearer knows how to remain calm and present amidst sorrow and grief.

It is suggested that they arrive early to greet the family members and meet with the funeral director. By arriving early, it can ease the burden of the family and provide needed support.

Carrying the deceased to their final resting place is a significant part of the service. Pallbearers serve a practical and emotional purpose. In some cases, pallbearers have the final contact with the closed casket.

Pallbearers will try to wear typical funeral attire, keeping the focus on the casket and the deceased. If you are active or retired military personnel, wearing your uniform is acceptable. 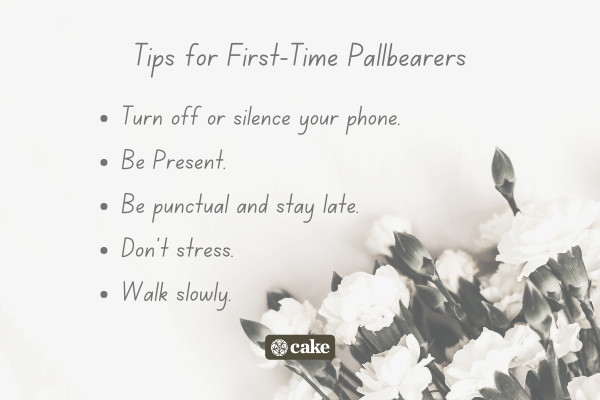 If you have said yes to serving as a pallbearer for the first time, it is normal to feel nervous. Here are some tips to help prepare for your role at the funeral.

Reflecting on the Role of a Pallbearer

If you are serving as a pallbearer, take a deep breath and recognize the positive significance of this opportunity. It takes a lot of courage and self-discipline to suit up and show up for this role when others are deep in their grief.

Take time after the service to reflect on your experience and don't be afraid to shed your emotions. You're human and that's a beautiful thing.

Want to learn more about pallbearers? Read our article on Ghana's dancing pallbearers.

Post-planning tip: If you are the executor for a deceased loved one and you are learning everything you need to know for handling their unfinished business, we have a post-loss checklist that will help you ensure that your loved one's family, estate, and other affairs are taken care of.