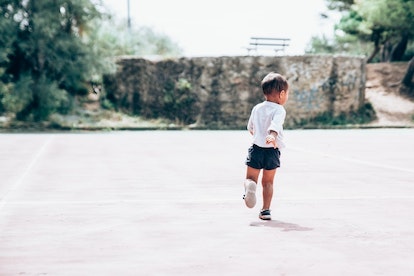 There’s nothing more exciting than when a new baby enters the world. They are sweet, beautiful creatures that are easy to love and adore.

But, those innocent cuddling babies turn into little people with their own personalities, opinions, and struggles. Sometimes children and teenagers are challenging to be around—especially for a parent.

If you’re a parent, here are some encouraging quotes that will help you realize that your kids aren’t the only ones who drive their parents batty. These quotes will also celebrate the triumphs, struggles, and love that come with raising children.

Quotes About Being a Single Parent

Being a single parent is a tough gig, but many solo parents rise to the occasion. They do what they need to do to support and love their children, and for that, they need to be celebrated. Here are some quotes about single parenting to use when writing a tribute to dads or moms.

Although we don’t know who wrote this quote, we can’t help but think this is how a single parent must feel.

2. “I would say to any single parent currently feeling the weight of stereotype or stigmatization that I am prouder of my years as a single mother than of any other part of my life.” —J.K. Rowling

J.K. Rowling began work on her Harry Potter series when she was a single mom living in England.

3. “When you are a mother, you are never really alone in your thoughts. A mother always has to think twice, once for herself and once for her child.” —Sophia Loren

When you are a single parent, you can’t make any decisions without considering the consequences it would have on your children.

4. “Don’t pity me because I am a single mum. Respect me for having the courage to do it alone, the strength to never give up and the love to put my child’s needs before my own.” —Unknown

Kudos to the working single parents out there who work hard every day to support their children.

5. “Some days she has no idea how she’ll do it. But every single day. It still gets done.” —Anonymous

Of course, this quote can be used as a shout out to single fathers as well.

Quotes About Being a Step-Parent

Step-parents often find themselves in a unique parenting position that they may have never expected. Many rise to the occasion and fill the roles beautifully. Here are some quotes to encourage great step-parents.

6. “A step-parent is so much more than just a parent; they made a choice to love when they didn’t have to.” —Unknown

Being a step-parent can’t be easy. People who do it with grace and class deserve special honors.

7. “It takes a strong man to accept somebody else’s children and step up to the plate another man left on the table.” —Ray Johnson

Becoming a step-father may be even more difficult if the biological father is still in the picture. It takes two special men to get along with each other in this unique arrangement.

8. “Step-parenting is like working at a late-night convenience store...all of the responsibility and none of the authority.” —Valerie J. Lewis Coleman

Valerie J. Lewis Coleman is a writer and publisher. After reading this quote, one could assume that she has heard the phrase: “You can’t tell me what to do. You're not my mom.”

9. “He never treated me like I was a package deal. I wasn’t a burden in his eyes. I was a bonus.” —Ashley Stock

We love this description of Ashley Stock’s step-dad. Maybe as a society, we should all call step children “bonus children.”

10. “Family isn’t defined only by last names or by blood; it’s defined by commitment and by love.” —Dave Willis

Of course, that commitment and love can come from biological parents as well as step-parents.

11. “My father gave me the greatest gift anyone could give another person; he believed in me.” —Jim Valvano

Jim Valvano was a basketball player, coach, and commentator. There are many quotes about parenting similar to this one, and they all ring true.

12. “Your kids require you most of all to love them for who they are, not to spend your whole time trying to correct them.” —Bill Ayers

This is a pleasant theory and makes for a nice quote, but you still need to teach your children not to be unpleasant.

13. “Children have never been very good at listening to their elders, but they have never failed to imitate them.” —James Baldwin

Your children are watching. Are you proud of what they see?

14. “Most things are good, and they are the strongest things; but there are evil things too, and you are not doing a child a favor by trying to shield him from reality. The important thing is to teach a child that good can always triumph over evil.” —Walt Disney

Walt Disney knew a thing or two about children.

15. “Parents are the ultimate role models for children. Every word, every movement, and action effects. No other person or outside force has a greater influence on a child than a parent.” —Bob Keeshan

Children and parenting have been the subject of comedians since the beginning of time. Here are a few of the funny things people have to say about parenting.

Just let this quote sink in for a bit.

17. “There are only two things that children will share willingly—communicable diseases and his mother’s age.” —Dr. Benjamin Spock

Dr. Benjamin Spock literally wrote the book on child-rearing. He was a popular figure in the 1940s and 1950s.

18. “Sometimes when I look at my children I say to myself, ‘Lilian, you should have stayed a virgin.’” —Lillian Carter

Yes, Lillian Carter, mother of President Jimmy Carter, said these words about parenting. If the mother of a president feels this way, what hope is there for the rest of us?

19. “Everyone should have kids. They are the greatest joy in the world. But they are also terrorists. You’ll realize this as soon as they’re born, and they start using sleep deprivation to break you.” —Ray Romano

Ray Romano wrote and starred in the sitcom Everybody Loves Raymond.

20. “Before I got married, I had six theories about raising children; now, I have six children and no theories.” —John Wilmot

People have been trying to learn about the proper way to raise children for years. John Wilmot lived in England during the 1600s.

You learn new things about yourself when you become a parent. It’s important to take one step at a time, try not to worry, and keep a sense of humor.

21. “Trust yourself. You know more than you think you do.” —Dr. Benjamin Spock

New parents always feel like they have to be perfect. Dr. Benjamin Spock, who wrote many books on children, reminds us to trust our instincts in most situations.

22. “One of the most obvious facts about grown-ups to a child is that they have forgotten what it feels like to be a child.” —Randall Jarrell

When people become parents, they find themselves mimicking their own parents instead of remembering what it was like to be a child. No parent intends to do this, but somehow it still happens.

23. “There’s only one pretty child in the world, and every mother has it.” —Unknown

Yes, this proverb is true, but your child is especially cute.

24. “You can learn many things from children. How much patience you have, for instance.” —Franklin P. Adams

Enjoy discovering new things about yourself when you become a parent.

25. “I don’t know what’s more exhausting about parenting: the getting up early, or acting like you know what you’re doing.” —Jim Gaffigan

Jim Gaffigan is a stand-up comedian who often talks about his life with five children.

If you're looking for more, read our guide on baby quotes.

Quotes About the Death of a Parent

Nothing can prepare you for the death of a parent. It doesn’t matter how old you are when it happens—losing your mom and dad to death is devastating for most people. Here are some quotes that reveal the grief most people feel when losing their parents.

26. “I’ve learned that regardless of your relationship with your parents, you’ll miss them when they’re gone from your life.” —Maya Angelou

Maya Angelou was a poet, activist, and civil rights leader. She spoke at Bill Clinton’s inauguration.

27. “There is something about losing your mother that is permanent and inexpressible—a wound that will never quite heal.” —Susan Wiggs

Many people would agree with this statement. Losing your mother is life-changing, but this is also true for losing your father as well.

28. “‘There is no death, daughter. People die only when we forget them,’ my mother explained shortly before she left me. ‘If you can remember me, I will be with you always.’” —Isabel Allende

Isabel Allende is known for her award-winning novel, The House of the Spirits.

It’s nice when great men attribute their success to their mothers. Abraham Lincoln lost his mother when he was 34 years old.

30. “The death of a mother is the first sorrow wept without her.” —Unknown

We often share our losses and sorrows with our parents. When parents aren’t around anymore, we suddenly feel adrift.

Hopefully, these quotes made you laugh and cry as you considered your role as a parent. While most of these aren’t appropriate headstone quotes or even ones to share in an epitaph, they are certainly reminders of how meaningful the relationship is between a child and parent.