Talking about death can be uncomfortable. It’s reasonable to wonder whether you should soften up the topic with phrases like “passed away,” rather than the more straightforward “died.”

At times, using those softer euphemisms for death can help open up a conversation about the subject. But sometimes, speaking more directly might be the better option.

Below, we’ll help you to understand the difference between “passed away” and “died,” and when you should use one versus the other.

What’s the Difference Between Passed Away Instead of Died? 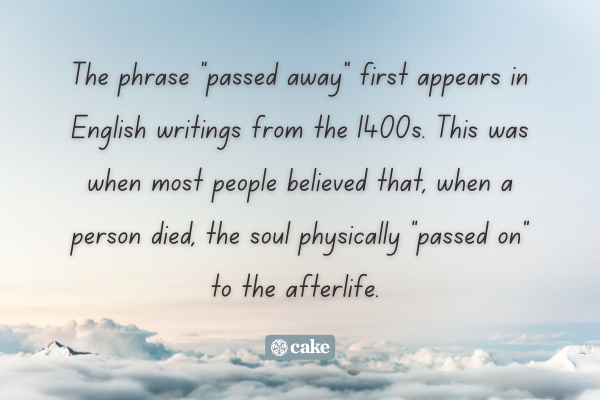 The word “die” is unambiguous: we all know what it means to die. To “pass away,” on the other hand, is less clear.

Origin of the phrase “passed away”

The phrase “passed away” first appears in English writings from the 1400s. This was when most people believed that, when a person died, the soul physically “passed on” to the afterlife.

In those Medieval days, the phrase “passed away” wasn’t considered a euphemism or metaphor for death. Instead, it was a literal description of what the majority of people believed happened when the body ceased to live.

Today, beliefs about what happens when we die are less cut-and-dried. We now use the phrase, “passed away” euphemistically, rather than as a literal depiction of events.

Examples of died and passed away in a sentence

Here are some examples of how you might use “passed away” or “died” in sentences:

Why Do People Say Passed Away? 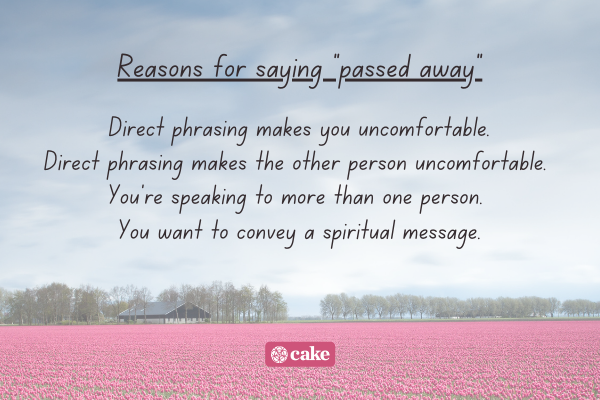 Reasons for saying “passed away”

There are multiple reasons why you might use a term like “pass away” rather than “died.” Here are a few of the most common:

Not everyone is comfortable talking about what death is like directly, whether it’s the death of a loved one or their own mortality. That’s understandable, and it shouldn’t prevent you from talking about the topic altogether. If using softer phrasing like “passed away” makes it easier for you to broach the subject, there’s often no harm in doing so.

Conversations are a give-and-take, and you usually want the other person to be comfortable, too. When you’re talking about death with someone you care about, you might use phrases like “passed away” if you notice they’re uncomfortable with words like “died.”

You’re speaking to more than one person.

If you’re speaking to a group of people, it’s hard to know who might be offended by words like “die” or “dead” in certain contexts. In situations like this, you might err on the side of caution and lean on phrasing like “passed away” instead. This could also be the case when you’re putting together an obituary or announcing a death.

You want to convey a spiritual message.

Euphemisms can help us communicate

Euphemisms develop over time to help people address fears, grief, and difficult topics more comfortably. And when you’re addressing a subject like death, euphemisms can be an essential communication tool.

If we return to the example sentences provided above, we can see how someone might receive a sentiment, statement, or question about death:

In this situation, using the term “died” doesn’t come off as harsh or uncaring. You’re referring to a personal experience, which gives you a lot more leeway to be blunt.

In this instance, using the softer phrasing, “pass away,” might go over better. Using blunt language like “die” demands that the person faces the reality of their pet’s death at that moment when they might not be emotionally prepared. The euphemistic “pass away” lets them talk about the passing of their pet without necessarily remembering every vivid detail.

Just like in the first example, you’re talking about a personal experience here, which means you can use whichever phrasing you want. However, it’s important to consider who you’re speaking with, too.

Be aware that using the direct term, “died,” might make a person uneasy if they didn’t already know this information, or if it seems to come out of left-field. The soft euphemism, “passed away” can show that you’re considerate of their feelings, too.

This sentence most likely takes place in a medical context, or it might be spoken by police officers after an accident. This is one of the situations where using direct phrasing is important. Using a euphemism for death like “passed away” when you’re informing family members about their loved one’s death can often do more harm than good.

The context for this sentence is likely a history class, or maybe trivia night. Chances are, the people you’re speaking with, and you yourself, don’t have any emotional attachment to the historical figure, Vladamir Lenin. In this type of situation, it’s quite uncommon to use euphemistic phrasing like, “passed away.”

Is It Okay to Say Died Instead of Passed Away? 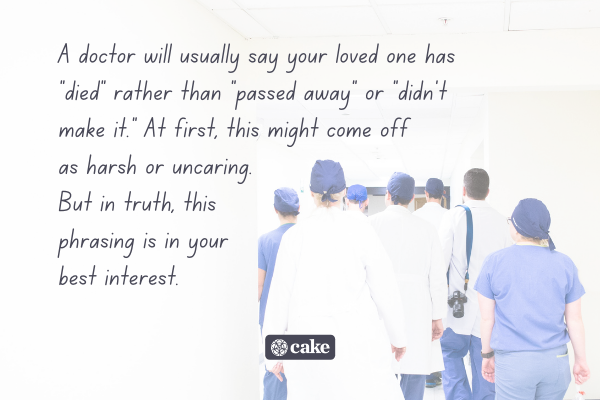 The short answer is: yes. It’s almost always okay to say “died” instead of “passed away.” In fact, the death positivity movement encourages us to use direct terms like “death” more often. And using this type of direct phrasing might be the best choice in many situations.

How doctors talk about death

When it comes to talking about death, sometimes it’s best to speak in straightforward terms. For example, a doctor will usually say your loved one has “died” rather than “passed away” or “didn’t make it.” At first, this might come off as harsh or uncaring. But in truth, this phrasing is in your best interest.

Many residency programs encourage doctors to be direct when it comes to death. Direct terms like “died” help patients and family members understand the situation clearly.

When to say die instead of passed away

The medical field isn’t the only context in which using direct phrasing about death might be more practical or helpful.

Any time you feel comfortable speaking directly about death, and the person you’re speaking with is comfortable, too, you should always feel free to do so.

Talking About Death is Hard

When you’re talking about death, it’s important to keep the goal in mind. Whether it’s to comfort someone who’s experienced a loss, express your own emotions, or discuss abstract thoughts, consider whether direct terms like “died” or euphemistic phrasing like “passed away” will serve you best.

How to talk about death Condolences & what to say