There could be many reasons you are in search of poems about friends. Or maybe you don’t need a reason. You may be creating a gift for a friend, and instead of relying on your own words to sum up your relationship, you want to use some well-crafted words from famous poets.

Maybe you are looking for a friendship poem for your kids. Encouraging them to share a favorite poem can feel like a heartfelt message when making homemade Valentine’s Day cards. Or perhaps, you recently lost a friend. If so, let us offer you condolences. Some of these pieces may be appropriate to use when writing a eulogy for your friend.

Regardless if you are searching for a funeral poem or something to post online to give people a boost, here are some friendship poems to enjoy.

Poems About Friendship for Kids 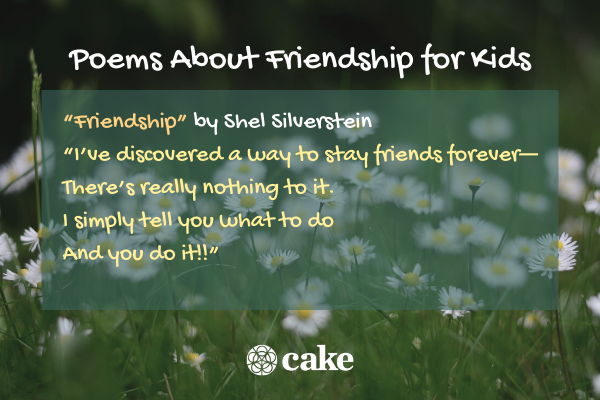 Teach your kids about the importance of having good friends and what constitutes a healthy relationship. Perhaps you can use one of these poems as the starting block for your discussion.

1. “How Many, How Much?” by Shel Silverstein

Shel Silverstein is the king of children’s poetry. His works, which were often accompanied by his creative illustrations, have been translated into 30 different languages and have sold 20 million copies.

“I’ve discovered a way to stay friends forever—
There’s really nothing to it.
I simply tell you what to do
And you do it!!”

Of course, this poem is meant to be shared in a joking manner. Use this poem to help your children understand what it means to be a good friend.

This is the last stanza of A.A. Milne’s poem “Us Two.” In it, the ever-agreeable Winnie the Pooh reminds the unnamed speaker about the importance of being “two.”

Poems About Friendship and Love 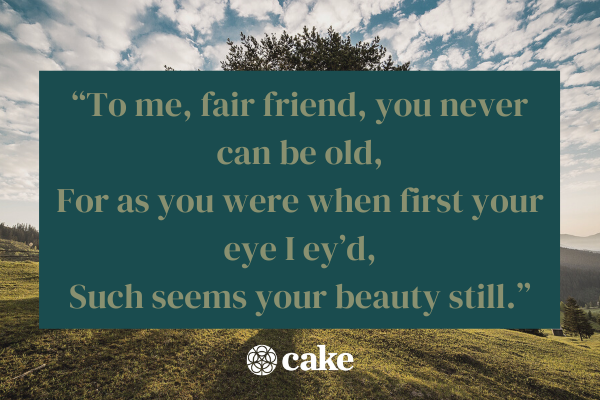 Perhaps your friendship evolved into love. To find other verses about this theme, consider searching for songs about friendship as well. We’ve also included poems about the love between friends.

“To me, fair friend, you never can be old,
For as you were when first your eye I ey’d,
Such seems your beauty still.”

Shakespeare’s sonnets were not titled, but if the Bard had taken the time to title his work, this one would be “A Celebration of the Love of a Friend.”

5. “I Want to Apologize” by Rupi Kaur

“i want to apologize to all the women i have called beautiful
before i’ve called them intelligent or brave
i am sorry i made it sound as though
something as simple as what you’re born with
is all you have to be proud of
when you have broken mountains with your wit
from now on i will say things like
you are resilient, or you are extraordinary
not because i don’t think you’re beautiful
but because i need you to know
you are more than that.”

This poem of friendship and love by Rupi Kaur is inspiring and a good one to send to a friend who may feel a bit down. In it, she implies that society’s obsession with beauty causes people to overlook the other gifts that a person has.

“I will not play at tug o’ war.
I’d rather play at hug o’ war,
Where everyone hugs
Instead of tugs.”

Why should Shel Silverstein’s work just be considered appropriate for kids? Although this poem may seem sophomoric, it discusses the nature of humans as well as the struggle that humanity has faced since the beginning of time. 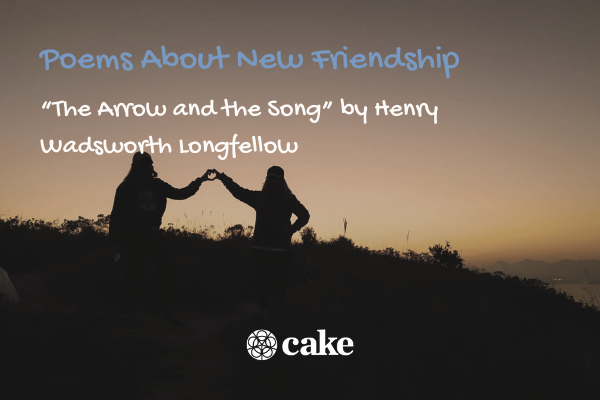 It’s a special thing when you click with someone. The connection may be unexpected. Even though your relationship may be new, it may feel as old as time.

7. “I Knew a Man by Sight” by Henry David Thoreau

“I knew a man by sight,
A blameless wight,
Who, for a year or more,
Had daily passed my door,
Yet converse none had had with him.”

How many times do good friendships evolve from continually bumping into each other? This poem is about inadvertently meeting the same person “down a lane,” “in a foreign land,” and “in the wilderness.” From those chance encounters, a friendship was born.

8. “The Arrow and the Song” by Henry Wadsworth Longfellow

Longfellow writes about “breathing a song into the air.” Not knowing where it went, he was amazed to find the song repeated back to him in the “heart of a friend.”

Longfellow is trying to teach his readers that to be a friend, you need to reach out to others and open our hearts.

9. “Your Catfish Friend” by Richard Brautigan

“I’d love you and be your catfish
friend and drive such lonely
thoughts from your mind
and suddenly you would be
at peace,
and ask yourself, “I wonder
if there are any catfish
in this pond? It seems like
a perfect place for them.”

We hope you find a friend to “drive such lonely thoughts from your mind.” While most would choose the friendship of another human, others would prefer the companionship of a catfish.

Some would view this poem as odd, but we think it is creative. And who knows where the mind wanders when standing on the shore of a pond, fishing for catfish? 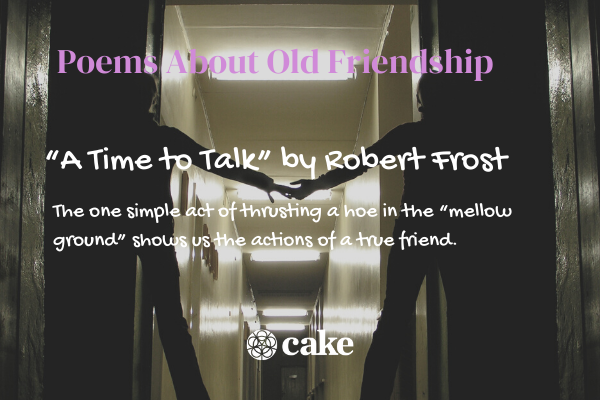 There’s something easy and comforting about being with old friends. Making conversation is easier. They already know your old stories, and they know your idiosyncrasies. Here are poems to toast relationships that are decades in the making.

We love this poem by Edgar Guest. In the poem, Guest describes a situation “when a feller’s heart is crushed and achin’ with the pain,
And teardrops come a-splashin’ down his cheeks like summer rain,
Becoz his grief an’ loneliness are more than he can bear.”

“Somehow it’s only old friends, then, that really seem to care.”

The beautiful thing about old friends is that you don’t have to make conversation with them if you are going through a difficult time. All you need to do is to be by each other.

We love this poem by Robert Frost. The one simple act of thrusting a hoe in the “mellow ground” shows us the actions of a true friend.

“When a friend calls to me from the road
And slows his horse to a meaning walk,
I don’t stand still and look around
On all the hills I haven’t hoed,
And shout from where I am, ‘What is it?’
No, not as there is a time to talk.
I thrust my hoe in the mellow ground,
Blade-end up and five feet tall,
And plod: I go up to the stone wall
For a friendly visit.”

Poems About a Friendship Ending 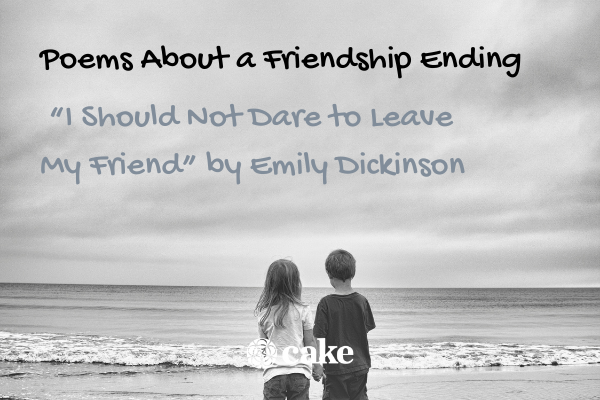 Unfortunately, friendships may end, whether in anger or in grief. Not all friendships may last forever but they may all have some bright moments to share, which can be great to remember as people change and time passes. Here are some verses about losing a friend.

We know that Blake is a poet, but he must really have experienced the loss of a friendship to describe it so perfectly.

Blake tells the story of having a problem with a friend and not discussing the issue with him. The problem ended up growing into a “poison tree” that dissolved the friendship.

Some friendships may end in death. In this poem, Christina Rossetti instructs her mourners to remember her with happiness and not with grief. As those who are looking on mourning their friend, this may be easier said than done.

14. “I Should Not Dare to Leave My Friend” by Emily Dickinson

The famous poet Emily Dickinson wrote this passionate poem about the deathbed of an unnamed friend. It is up to the reader to interpret whether Emily sees herself as the one dying or the one attending the person in bed.

Regardless, Dickinson speaks about the importance of sticking with a friend — until the absolute end.

Show Your Love With Moving Words

Think about the friends in your life. How do you show that you care for them? Do you tell them that you value their friendship? Do you schedule time together by checking off items on your friendship bucket list?

If your friend is like family, you may consider sharing your end-of-life wishes with them. Your friend may be easier to talk with about such things than members of your family, and your friend may not judge you if your funeral plans differ from the norm. Together, you two can forge new memories while making sure to hold your old ones close.