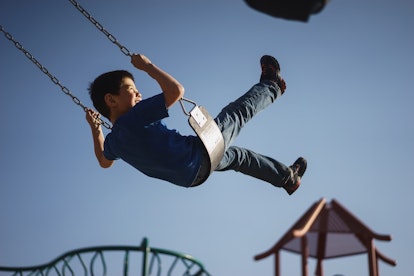 Few things in life can be as insurmountable as the pain of losing a child. If you’ve lost a child, trying to figure out how to write a eulogy may feel plain impossible--and it’s okay if you can’t find the right words.

In a case like this, sometimes the words of poets and songwriters can convey your heartache when the words just cannot manifest from your heart.

If these aren’t capturing your feelings, there are also some lists of the best funeral songs and also books on grief. You may find that someone has already put the sentiment you wish to convey into words.

Don’t be afraid to share the words of these writers in an effort to communicate your own grief with more clarity. Here are some timeless poems about the loss of a child that may inspire you during this sad time.

Poems About the Death of an Infant

There are few things as cruel as seeing the life of an infant cut short before they’ve truly had a chance to live. This applies to people who have lost babies to miscarriage or stillbirth as well as living children.

The poems here are often written from personal experience, which makes them ache even more. You can also read our selections on baby loss quotes to help get you through.

Singer Celine Dion famously struggled with infertility and miscarriage. Those experiences inform her performance of this poetic song.

Her normally bombastic vocals are more nuanced and subdued than you would expect. Clearly, her personal experiences infused the recording of this song.

2. "Garden of Stone" by Michael Kaner

This emotional poem about a young child who dies unexpectedly has moments of genuine pathos. The line, “The world gets older, but he’s still two/And we dream of things he’ll never do,” is devastating in its simplicity.

3. "I Remember You" by Unknown Author

This poem about miscarriages opens with the line, “The world may never notice if a rosebud doesn’t bloom.” It highlights the invisibility that often accompanies the loss of a wanted pregnancy.

Some poems about the loss of a child can border on saccharine. That is not the case with “Empty.” This sparing poem is unflinching in exposing the parent’s anger at the position she finds herself in.

“My despair is sacrificed to responsibility/You would be strong too if you had no other choice,” serves as a stinging rebuke to the universe.

This bittersweet poem isn’t about the umbilical cord that connected a mother and child while the baby was in utero. Instead, it’s about an invisible cord that connects their hearts together even though her child has passed away.

Merrick wrote this poem after her 14-month old daughter died unexpectedly from a brain aneurysm.

Poems About the Death of a Son

The death of a son can be a crippling blow, no matter how old they were, and it can be a real heartbreak to be a parent who outlives their child. Whether your son was a child or an adult, his life was cut too short too soon.

Some poems are meant to soothe. This poem is raw, as the narrator alternates between being numb and angry. It’s important for poems like this to exist.

People often shy away from talking about their anger after losing a child. Works like this help normalize it and can keep people from bottling up negative emotions.

7. "A Mother’s Lament for the Loss of her Only Son” by Robert Burns

The language in this poem is old-fashioned, which is no surprise. After all, it was written in the 18th century. Burns, who is arguably Scotland’s best-known poet, wrote it for a woman whose son died at the Strasbourg military academy in 1787.

This poem would be appropriate to share for a veteran or for a son killed in action.

Guest was an American poet active in the first half of the 20th century. He was known as the People’s Poet because of his sentimental and optimistic poems. He’s the only Poet Laureate of Michigan in the history of the state.

Guest buried two of his children, and that experience informed the writing of this piece.

Thomas, the most famous poet to come out of Wales, lived a tragically short life. It’s ironic that this, his most well-known work, exhorted people to fight back against death.

Thomas apparently wrote this powerful poem in honor of his late father. However, it’s appropriate to read at the funeral of anyone who fought against illness or their own personal demons in order to stay alive.

Wilcox, a prodigal American author and poet, was active in the late 19th and early 20th centuries. She is perhaps best known for writing the iconic line, “Laugh, and the world laughs with you; weep, and you weep alone.”

But it was the loss of her son that led her to compose “The Little White Hearse” to comfort other mothers in the same situation.

Poems About the Death of a Daughter

Daughters have special and unique relationships with their parents. The loss of a daughter can be damaging to both a mother and father. Hopefully, all parents can find some sense of catharsis from these poems.

11. "Do Not Stand at My Grave and Weep” by Mary Elizabeth Frye

While this poem was originally written for a family friend coping with the loss of her mother, its message is appropriate for a daughter as well. This poem is ideal for someone who has a more optimistic view of life beyond death. Its message is that those we love never really leave us.

Sometimes people, in an effort to comfort, utter the platitude that everyone must die. St. Vincent Millay fights back against acceptance of that fact. Someone having a hard time picturing the world without their daughter may find comfort in this piece.

13. "For a Daughter Who Leaves” by Janice Mirikitani

This poem is officially about a daughter leaving her mother behind to get married. However, it can also serve as a metaphor for a daughter departing the mortal plain.

14. "Death is Nothing at All" by Henry Scott-Holland

Holland, a Professor of Divinity at the University of Oxford, originally delivered these words as part of a sermon in 1910. Over time, they became interpreted as a well-known funeral poem thanks to its inspirational and hopeful message.

Maya Angelou was one of the world’s greatest poets. In this powerful piece, she delineates the void left in nature when a mighty presence is felled. But she also highlights the hope and solace that await us when the upheaval has come to its end.

The pain of losing a child is singular. If you experienced a miscarriage or stillbirth, the death of a young child, or the passing of an adult child, few people will understand your pain.

Though you may feel alone, there are other parents out there who have been through this. We hope that by sharing their words and experiences here, you may find some measure of peace. If you're looking for more poetry, head over to our selection of popular funeral poems.