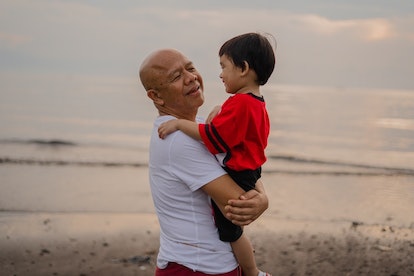 How do you spend time with a special grandfather? One of the best things you can do is spend time with him. Listen to his stories, let him teach you a new skill, or simply eat ice cream sundaes while you share a quiet moment together.

You may feel awkward having this type of honest conversation with someone you revere, and you may feel more comfortable sharing a poem. Here’s some poetry for grandpa that you may choose to share instead. While we will include funeral poems on our list, it would be best to share your feelings with your grandfather instead of with his mourners at his funeral.

Do everything that you can to maintain a close relationship with your grandpa. You never know what tomorrow will bring, and you don’t want to live with the regret of never asking your grandpa about his life or never telling him that you love him.

Here are some poems about a grandpa’s love that are both beautifully written and meaningful.

1. “My Papa’s Waltz” by Theodore Roethke

This poem describes a special moment between a young person and his papa. Theodore Roethke was an accomplished American poet who published works in the 1940s, 50s, and 60s.

This poem tells the story of a grandfather who suffered at the hands of bigots and oppressors but still showed love to his grandson by taking time to run a friendly footrace against the child.

When you think of your grandfather, do you think of his physical strength and endurance? This speaker in this poem reflects upon the brute strength of both his father and his grandfather as they dig deep holes. In the final lines of the poem, the speaker says that he chooses to use a different tool for his work — a pen.

The speaker in this poem describes the unique personality of his grandfather. He describes going out to breakfast with his grandfather on Saturday mornings, and how “sugar, butter, and coffee cured everything.” If your grandpa is free of worry, headaches, or angst, you will enjoy this poem about a man with a pleasant personality.

5. “Grandfather Kept a Garden” by Unknown

“Grandfather Kept a Garden” is a rhyming poem that celebrates the contributions grandfathers make to the family. The “garden” in this poem is more than a collection of tomato plants or petunias. Instead, the garden is the family that the patriarch helped lovingly tend.

Does your grandpa have a great sense of humor? Take advantage of this by sharing funny or uplifting poems with the man you adore. You may also want to make a playlist of songs for grandparents to play on your grandpa’s special day.

6. “They Say I Have” by Shel Silverstein

This silly poem will make anyone grin. Make sure you take the time to enjoy Shel Silverstein’s illustration that he included with the published poem.

This short and straightforward poem celebrates the fact that grandfathers get to spoil their grandkids and then send them home. It goes like this:

Grandfathers are a special breed
Of kinfolk, all their own.
They love you and hug you,
And spoil you to death.
And then, they send you home.

8. “I’m My Own Grandpa” by Shel Silverstein

A list of funny poems must include two by Shel Silverstein. This poem was made into a song and performed by Ray Stevens. The idea for the poem may have originated from Mark Twain.

What would happen if all the old geezers in the world united and formed a club? This poem would be the oath each old guy would take before becoming a member. Two of the promises are that they will “smell like mentholated oil at all times,” and “kick kids off my lawn and keep their balls.” You can imagine the rest.

This poem tells the humorous story of reading that an elderly person was hit by a car. Aghast, the speaker in the poem continues to read the newspaper account of the accident only to learn that the victim was younger than he was. This short poem may put a smile on your grandpa’s face.

Poems to Remember a Grandpa Who Died

Whether you lost your grandfather years ago or just last week, here are some poems about the man you called “Papa,” “Gramps,” or “Grandpa.” You may want to post one of these poems on social media to say, “Happy birthday in heaven, Grandpa.” Or you may wish to simply read the poems to put a smile on your face as you remember the life of a great man.

11. “My Last Visit” by Alexis Abraham

Were you able to visit your grandfather right before he died? If so, you may have enjoyed a poignant moment together or even shared a laugh or two. This poem describes the last visit between a grandson and a “Poppi.”

12. “The Best Granddad” by Jessica Miles

This rhyming poem reminds the reader of all the extraordinary things that a grandpa does for his grandchildren. If you had a stereotypical grandfather who took you fishing and fed you sweets, you would enjoy reading this poem by Jessica Miles.

Does life not seem the same since your grandfather died? This piece by an unknown poet is about those melancholy feelings that often coincide with grief.

This poem is about a person reflecting upon how lucky and privileged she was to have had a relationship with her grandfather. This poem is best for someone who believes in the afterlife and heaven.

15. “He Was Just a Small Town Maritime Man” by Chelsea Peters

The speaker in this poem misses her grandfather, who died of cancer. She reflects on the life of the great man and remembers the moments they shared.

Funeral Poems for Grandpa or Great-Grandpa

Finding a poem to read at your grandfather’s funeral may be a difficult task. How can you find the right words to describe how you feel? Here are some poems to consider.

Your grandfather will want you to remember him, but at the same time, go on with your life. This poem is a reminder to you and the other mourners at your grandfather’s funeral that “Better by far you should forget and smile than that you should remember and be sad.”

17. “Footprints on the Sands of Time” by Henry Wadsworth Longfellow

Do not confuse this poem by Henry Wadsworth Longfellow with the famous poem called “Footprints,” about walking along a beach. In this poem, we are instructed to make much out of time and to try to learn as much as possible from those who came before us.

American poet Walt Whitman wrote this poem in response to the death of Abraham Lincoln. Even though it was written for a president, it is an appropriate poem for anyone who demanded respect.

You may not have known that Mark Twain (Samuel Clemens) wrote poetry. This short and simple verse was adapted from a poem by Robert Richardson. Twain’s version was used on his daughter’s headstone.

20. “Nothing Gold Can Stay” by Robert Frost

This poem is often found in high school literature anthologies. Even though its message is simple, it’s poignant enough to be read at the funeral for your grandfather.

21. “Do Not Stand at My Grave and Weep” by Mary Elizabeth Frye

This is one of the most common funeral poems, but it is used frequently for a reason. The speaker of this poem is deceased. His mourners are instructed to look for him in nature as opposed to standing in the cemetery and crying.

Even if you don’t typically enjoy reading poetry, you may enjoy a few of these pieces that we have listed. They are very accessible and may help you put into words how you feel about your grandparent.