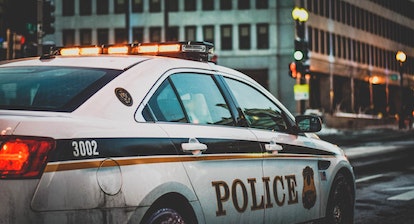 As you might imagine, a police funeral is full of traditions and is far more official than a regular funeral. You may wonder what to wear and how to handle yourself if you’ve never attended a police funeral before.

On the other hand, maybe you’re trying to plan a police funeral for a fallen loved one. In that case, your questions will probably change: “How do I know if my loved one even qualified for police honors? What parts of the planning is the department responsible for?”

Check out our answers to all of these questions and more.

COVID-19 tip: If you're planning a virtual Police funeral using a service like GatheringUs, you can still adapt many of these traditions, like the last call, songs, and prayers, to include your online guests. Brainstorm with your funeral director, event planner, or religious leader to help you figure out the logistics or any limitations.

How to Qualify for Police Honors

Qualifying for police honors means that your loved one must have been a sworn-in police officer. Three circumstances warrant police honors:

Eligibility changes in different situations, however. For example, an officer engaged in criminal activity at the time of death wouldn’t be eligible for police honors.

The traditions at a police funeral represent honor, service, and gratitude. An officer dying, particularly in the line of duty, is an unspeakable tragedy, so officers and families bond together to create a meaningful sendoff.

There are two main police funeral categories: a line of duty death, referred to in shorthand as LODD. An officer must die on duty to qualify as a LODD. Deaths that occur as a result of an incident that occurred while on duty also count and deserve full honors. These types of funerals are famous for bringing officers in from across the country. They often shut down entire cities and induce widespread mourning.

The second category is a non-line-of-duty death. In this instance, the officer died in a way that wasn’t connected to his profession. This death still merits a department funeral. Some military-style honors may be included in the service.

Police departments may categorize suicides differently. Some treat it as a line-of-duty death with full military honors. Others try to handle suicide funerals by drawing as little attention to them as possible. As officer suicides increase, however, full military-style funeral and honors are becoming more common.

How do you want people to honor you at your funeral?

Officers call this an “end of watch call” or “last radio call.” This sometimes happens immediately after an officer’s death. It occurs after the funeral, too. Officers from the deceased’s unit gather around a police radio.

Bagpipes are traditionally used in a police funeral because of their mournful sound and historic significance. Family members can choose songs and instruments that are meaningful to them, too.

Prayers are often included because of the somber nature of the occasion. These can change based on the deceased’s faith tradition or lack thereof.

There’s a flag presentation in most situations. Specific traditions are up to the department chief and this presentation relies on the casket flag.

Attending officers drape a flag over the casket. At a certain point in the ceremony, this flag is folded and presented to family members. It’s usually given to the deceased’s next of kin. Pallbearers, selected by the family, fold it up. The flag is then presented to the department chief, who presents it to the next-of-kin family member.

There’s often a procession to the cemetery after the funeral service that concludes in a motorcade. The hearse, thousands of police officers, and civilian mourners all join the motorcade.

Depending on the department, family, and type of death, there are many special customs for an officer’s funeral. Saluting the casket is one tradition. It shows respect for the deceased and is often done before any ceremonies begin.

Many departments guard the casket around the clock if the family allows it. This happens from the time the body goes into the casket until the ceremony. Depending on the nature of the officer’s death, the family’s home may be under guard 24/7 too.

Another crucial tradition is the family liaison. Someone from the department is assigned to the deceased’s family so they have a single point of contact. This liaison also helps with transportation and other needs. Someone who was close to the deceased officer is often chosen since the family might know them well.

Etiquette at a Police Officer’s Funeral

Conducting yourself inappropriately at a funeral is a sign of disrespect. Wearing bright colors instead of dark ones is a good example. Even if it’s not intentional, it’s a social faux pas that is best just to avoid.

Even though funerals are somber, orderly events, the expected attire varies. The family may request that you wear white for a celebration of life, for example. At others, more casual attire may be appropriate.

A police funeral, particularly with military-style honors, is not one of those occasions. Attending officers will be in full uniform. As a civilian attendee, formal funeral attire is appropriate. Dark colors and conservative dress are preferred.

The mood of a police funeral is somber and respectful. The point of the service is to acknowledge and honor a police officer’s funeral and death.

Small talk is usually avoided at these events. Telling jokes is also insensitive. Focusing on the event at hand is crucial in order to be able to comfort a grieving family.

The number of attendees depends on the type of death. For a non-line of duty death, officers from the deceased’s unit or department will likely attend. Family members and friends are also welcome. Circumstances change in a line-of-duty death. The number of attendees also changes based on media attention. Let’s say an officer dies during a publicized event. In this case, thousands may attend — this may also occur for smaller-scale lines of duty deaths, too.

Many people may take part in the funeral, even if you’ve never met them and they aren't official attendees. They may line the sidewalks during the procession, wave flags or salute in a sign of public respect — even if they aren’t official funeral attendees.

Rooted in Tradition and Honor

Many people are afraid of police officers in today’s divisive society. Since they put their lives on the line daily, this goes both ways. Officers often garner the respect they deserve, but many people are still afraid of interactions with the police.

A police funeral is a chance to come together in unity. It's also a chance to celebrate a fallen police officer’s service and dedication to his or her community.