In John Singleton’s seminal film Boyz in the Hood from 1991, the character Doughboy poured some malt liquor on the ground. He did this in honor of friends who had died and were no longer there.

The tradition of “pouring one out for the homies” was referenced again in a 1994 2Pac track titled “Pour Out a Little Liquor.” It has continued to be prevalent in hip-hop culture through the present day. The gesture is a symbolic one, meant to represent a sip a fallen friend would have taken had they been alive today.

To the uninitiated, pouring one out may seem to be one of the more creative ways to honor someone. But many people don’t realize that the concept of pouring one out goes back thousands of years. It can be traced back to several different cultures.

Here, we dig into the history and meaning behind this interesting tradition.

What ‘Pouring One Out’ Means 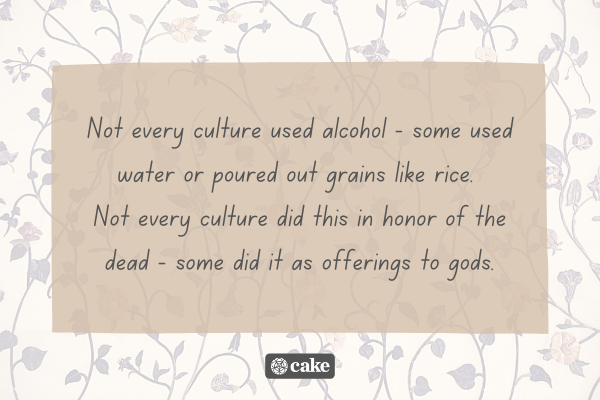 Several cultures have had some varying traditions on the concept of pouring one out. The ceremony is more formally known as making a libation. The word libation is used by most people nowadays as a fancy word for a drink.

But the original definition was more specific, meaning to pour out a drink in offering to a deity. Here are some of the cultures where pouring one out - or making a libation - originated.

The earliest documented instances of pouring one out seem to have originated in ancient Egypt. There, they often used water instead of alcohol. Water was symbolic, considered as a life-giving liquid.

However, on certain other occasions, ancient Egyptians did pour out other liquids in honor of the dead. These included milk and honey, as well as wine and other types of alcohol. Their general practice was to pour out a little of whatever liquid they were consuming, then drink the rest. Once the vessel they drank from was empty, they tended to break them on the ground.

“Pour libation for your father and mother who rest in the valley of the dead. Do not forget to do this even when you are away from home. For as you do for your parents, your children will do for you.”

Libations in ancient Greece typically did consist of alcohol - namely, wine. However, as in ancient Egypt, milk and honey were sometimes used. This practice is documented in The Encyclopedia of Ancient History. It is also specifically referenced in Book VI of Homer’s The Iliad.

Ancient Rome took cues from ancient Greece and adapted their own ways of making a libation. As in ancient Greece, Roman libations were made to honor the dead, and as an offering to the gods. They even incorporated interactive stone carvings into sarcophagi to be used as part of the ritual.

Several other cultures incorporate libation rituals as ways to honor the dead. There are documented libation practices spanning millennia from all over the world. This includes ancient China, indigenous tribes in South America and countless African cultures.

Not every culture used alcohol - some used water or poured out grains like rice. Not every culture did this in honor of the dead - some did it as offerings to gods. Regardless, many similarities exist between these ancient practices and the current tradition of pouring one out.

History of ‘Pouring One Out’ and in Pop Culture

As we mentioned above, pouring one out entered the national consciousness thanks to the film Boyz in the Hood. The film is a cultural touchstone and is worth seeing for many reasons. It launched the career of actors like Laurence Fishburne, Nia Long, and Morris Chestnut.

It also marked Ice Cube’s acting debut after an established rap career. This opened up the floodgates for more references to the act of pouring one out in various facets of pop culture.

“Pour Out a Little Liquor” by 2Pac was perhaps the earliest rap track to reference pouring one out. But several other rap and hip-hop songs have made references to it too. Here are just a few of those tracks, with the specific lyrics within:

The concept of pouring one out for the homies became so ubiquitous, that at a certain point it was lampooned. In the 1999 movie Austin Powers: The Spy Who Shagged Me, the villainous Dr. Evil poured one out for his homies.

More recently, the comedy show Key and Peele offered a much more nuanced send-up (warning: content is not safe for work).

How to ‘Pour One Out’ for a Loved One 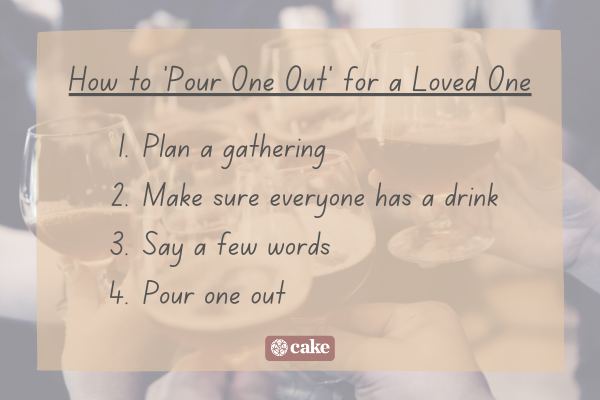 For all that pouring one out is a storied tradition, it is a fairly simple gesture to perform. Like many rituals, there is an element of personalization to it, as well. In some ways, it’s not dissimilar to a toast. However, it has even more brevity.

If you’ve had a friend pass away recently, invite a few close friends from your social circle to come over for an informal gathering.

The party itself doesn’t even need to be dedicated specifically to the deceased. If you want to have a gathering for a holiday or a birthday, you can still pour one out in your loved one’s honor. The whole point of the gesture is to include them in life’s moments even after their death. You can do that even as a small moment within a celebration.

2. Make sure everyone has a drink

There is no particular drink you must have for pouring one out. The only general rule of thumb is that it is an alcoholic beverage of some kind. In the Boyz in the Hood, Doughboy poured one out from a 40-ounce bottle of malt liquor. Malt liquor is similar to beer but has a different fermentation process and a higher alcohol content. It is also usually very inexpensive.

In the song “This is for My Homies” referenced above, Juelz Santana says he pours out Cristal for his fallen friends. Cristal is an expensive champagne that can cost hundreds or even thousands of dollars for a single bottle, depending on the vintage.

Most of the time, the gesture of pouring one out will fall between those two extremes. If your friend had a particular drink they were fond of, pouring that drink for them out is a nice touch.

You don’t have to make a big speech when you pour one out for a deceased friend or loved one. Unlike a eulogy or a toast, you don’t even need to prepare anything ahead of time.

Even just a sentence or two about missing your friend and wishing they could be there with you is all you need to say.

You don’t need to pour out an entire bottle or glass for your friend. Just a sip of whatever you’re drinking is sufficient. Again, this gesture is really about the symbolism of including a departed loved one in a ritual.

We always want our loved ones with us as we celebrate our successes in life. This is a small way to help keep them present in our hearts and minds.

Remember a Loved One by ‘Pouring One Out’

The gesture of pouring one out is a tradition with a lot more history behind it than most people understand. It’s just one of the many small rituals we perform in memory of those we have loved and lost.

While it has origins in several cultural traditions, it has evolved into its own distinct practice. This simple gesture is one you can easily incorporate into your life to keep your loved one present at any special occasion.