In many cultures across the globe, saying prayers for the dead is an important form of remembrance. Not only is it a way to feel connected to the deceased’s memory, but in some traditions, it is believed to help the departed soul in the afterlife.

In Islam, praying for the deceased is an important part of the faith. There are different prayers for the dead, whether the departed was Muslim or non-Muslim. There are funeral prayers for family, friends, strangers, and everyone in between.

Muslim tradition puts a lot of focus on the afterlife and what happens after death. This impacts both Muslim funerals and how families choose to pray for the dead. In this guide, we’ll take a closer look at the most common Islamic prayers for the deceased and what they mean.

The Islamic Afterlife: Behind the Prayers for the Dead 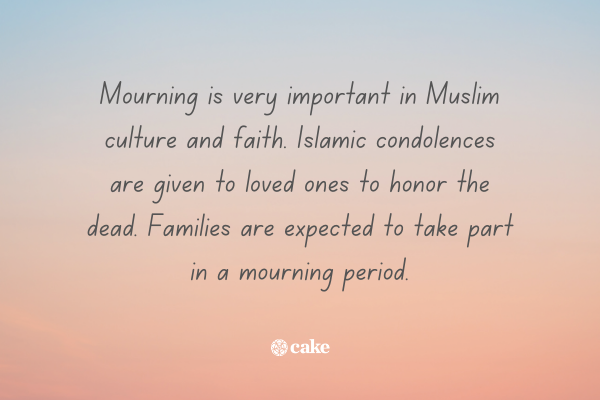 Before we can talk about Islamic prayers for the dead, we have to consider the role of the afterlife. In Islam, it’s believed that souls transform after death. There is a day of judgment when humans are expected to be divided between paradise and hell.

According to the Quran, the world will be destroyed on the Last Day. Allah (God) will raise the people from the dead for their final judgment. This is also known as Judgement Day, and it’s similar in Christianity.

Until this day of judgment, souls remain in their graves. However, those who are bound for hell experience suffering within their graves. On the other hand, those who lived pure, faithful lives will rest in comfort until the time comes.

In Islam, death is not something to be sad about. It’s inevitable, but it doesn’t mean the ending of one’s life. Muslim tradition views all of life as one of Allah’s tests. It’s a way to show your faithfulness, strength, and compassion. It’s what comes after life that matters most.

However, mourning is very important in Muslim culture and faith. Islamic condolences are given to loved ones to honor the dead. Families are expected to take part in a mourning period. For spouses who have lost a partner, this can last over four months.

It’s normal for there to be crying and weeping at the funeral and even after. However, this is done in a modest way, and it’s not appropriate to overly display one’s grief. Islamic prayers for the dead and death anniversary prayers are common for both the funeral and the years after.

Muslim Funerals for the Dead 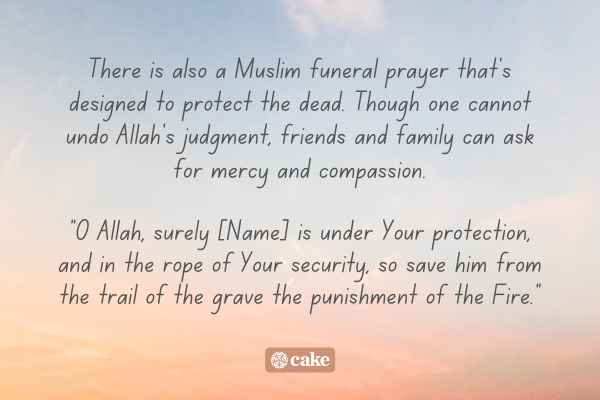 There are a number of prayers for the dead in Islam. Some are intended to only be said at the funeral, while others can be said at any time.

This is the Islamic funeral prayer. It’s commonly part of the Muslim funeral tradition. The prayer itself is performed by many, usually an entire congregation. It’s a way to seek pardon for the deceased, as well as all dead Muslims.

It’s important to note that the “Salat al-Janazah” is a collective obligation for all Muslims. This means that if some Muslims take on the responsibility of saying the funeral prayer, this obligation is fulfilled. If no one recites the prayer, all Muslims are accountable.

Though the prayer is in Arabic, it translates to “O God, forgive our living and our dead, those who are present among us and those who are absent…” It’s a reminder to live a life full of faith if one hopes to grow closer to God.

In Islamic tradition, it’s very important to ask Allah for forgiveness on behalf of loved ones. For example, after the death of a parent, children might ask for their parent’s actions to be forgiven as they rest awaiting final judgment.

This prayer reads, “O Allah, forgive him. O Allah, strengthen him.” Though simple, this is a simple prayer (or dua) to repeat in the days after losing a loved one.

Another similar prayer to the one above requests Allah to elevate the deceased within their grave. It reads, “O Allah, forgive [Name] and elevate his station among those who are guided…”

By asking Allah to elevate the deceased, one is really asking for them to be forgiven. Shine a light on his soul and cleanse him of any transgressions. This is the best way for your loved one to find final peace in the afterlife.

Losing a loved one is never easy. Finding peace after a loss takes time, and many find comfort in praying for assistance with their own grief and feelings of sadness.

The prayer for grief goes, “O Allah, I seek refuge in you from grief and sadness, from weakness and from laziness…” This is a simple prayer to call upon Allah for help and guidance after a loss.

It’s common in Islamic tradition to pray not just for yourself, but for others. There is a lot of collectivism in this belief system, and it’s important to pray not only for yourself but for all Muslims.

In this prayer for one’s parents and all Muslims, the speaker asks for forgiveness for themselves, their parents, and everyone on the day of judgment. This prayer reads, “O our Lord! Cover us with Thy Forgiveness—me, my parents, and all Believers, on the Day that the Reckoning will be established.”

When Muslims experience grief, loss, or pain, they seek healing in Allah. As the prayer goes, “Allah is sufficient for us and the best of those on whom to depend.”

This prayer is a simple reminder to turn to Allah in times of pain. Though you might still experience grief from a loss years after, Allah is there for comfort and support.

There is also a Muslim funeral prayer that’s designed to protect the dead. Though one cannot undo Allah’s judgment, friends and family can ask for mercy and compassion.

This prayer reads, “O Allah, surely [Name] is under Your protection, and in the rope of Your security, so save him from the trail of the grave the punishment of the Fire.” Allah is forgiving and kind, and he listens to the prayers for the dead.

Because it’s believed that those who do wrong will suffer in Hell after their final judgment, many Muslims pray for protection for themselves and their loved ones.

They recite, “Out Lord, You have encompassed all things in mercy and knowledge, so forgive those who have repented and followed Your way and protect them from Hellfire.”

Though Allah will have the final say, it’s important to ask for forgiveness. We are all human, and mistakes are a natural part of life. What matters is that we understand what we’ve done wrong and that we ask Allah for forgiveness.

Islamic Prayers for the Dead and Forgiveness

As you can see from the prayers above, there is a focus on forgiveness and protection. Though everyone has the ability to be joined with Allah in paradise after death, it’s important to pray for compassion and mercy. Luckily, those still living can have a say and make their input known by praying for the dead.

Whether you’re attending a Muslim funeral or want to learn the best prayers to say in honor of a loved one, there’s something on the list above for everyone.