The President of the United States is said to be one of the most powerful people in the entire world! Every President not only serves as the head of the nation but is also the Commander in Chief of the Armed Forces. As such, there’s a lot of pressure and responsibility that weighs on the President’s shoulders.

Because of their position, there are strict rules and guidelines that ensure the President can carry out his duties with full health for the length of their term. However, there have been some circumstances when the President began his term and was unable to finish it, dying in office. When this happens, the Vice President takes over Presidential duties. Out of the 45 Presidents to date, eight died while in office.

Of the 48 Vice Presidents, seven died in office. The causes of death include assassination, illness, and natural causes.

US Presidents That Died in Office 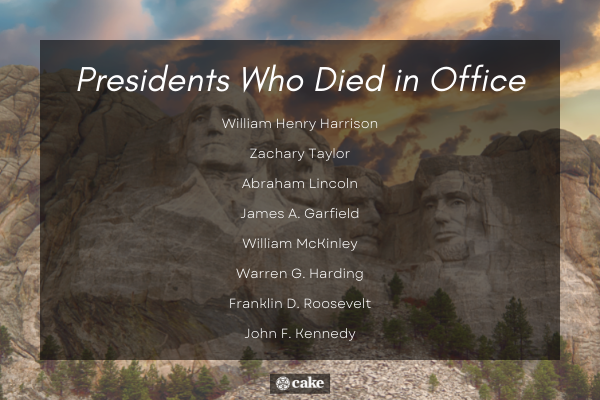 Since the Presidential Office was set up in 1789, 45 individuals have filled in as President of the United States. Of the eight presidents that died in office, four were killed and four passed away from natural causes. On each of these occasions, the VP became the Commander in Chief for the duration of the term.

If you’re on a fact-finding mission or heading to Washington D.C. for a visit, you can find out where the US Presidents are buried and visit each one.

Here are the eight presidents who died in office:

William Henry Harrison was an American military officer and government official who was elected to serve as the ninth President of the United States in 1841.

On March 26, 1841, William Henry Harrison became sick with a cold after his two-hour-long inaugural address in the rain and subsequent meetings in wet, damp clothing. His health deteriorated over the following days and specialists were brought in to treat him. He was determined to have pneumonia.

Exactly thirty-two days after being sworn in, Harrison became the first US president to die in office.

Zachary Taylor was the twelfth president of the United States. On July 4, 1850, Taylor attended numerous orations to commemorate the laying of the Washington Monument foundation.

He ended the blisteringly hot day by drinking ice water, cold milk, cherries, and other fruit. That night and the following days he fell sick with an intestinal illness. Taylor died five days later on July 9. Over 100,000 people attended his funeral.

Abraham Lincoln served during one of the most volatile periods of US history. His death occurred on April 14, 1865, just as the Civil War drew to an end. In a move that sent shockwaves through the entire nation, John Wilkes Booth, a notable actor, shot President Lincoln from behind while Lincoln and his wife were enjoying a play at Ford’s Theater. Booth shot Lincoln once in the back of his head then jumped from the balcony onto the stage and evaded capture for the next seven days.

Lincoln’s wound was fatal and one of the most celebrated presidents of all time died the next morning. Abraham Lincoln’s burial site garners thousands of visits by tourists from all over the world every year. 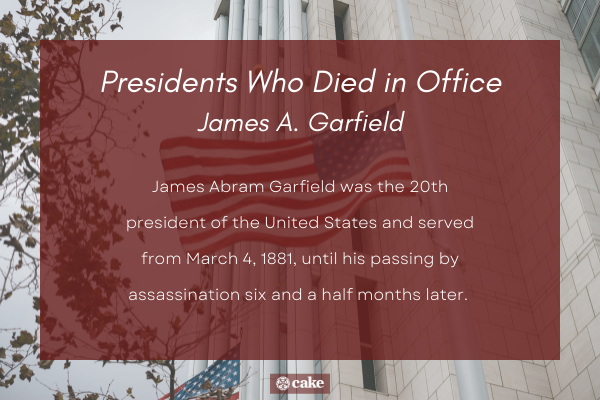 James Abram Garfield was the 20th president of the United States and served from March 4, 1881, until his passing by assassination six and a half months later. The second assassination of a US president, James A. Garfield was shot while out for a walk in Washington, D.C. on July 2, 1881, by Charles J. Guiteau.

He died eleven weeks later on September 19, 1881, of blood poisoning and complications from the shooting. Vice President Chester A. Arthur became the president after his passing.

William McKinley was the 25th president of the United States from 1897 until his assassination in 1901. He was shot on September 6, 1901, inside the Temple of Music on the grounds of the Pan-American Exposition in Buffalo, New York.

Just as McKinley was warmly greeting the public, anarchist Leon Czolgosz shot him point-blank in the chest. Though doctors predicted a full recovery, McKinley died eight days later on September 14 from gangrene brought about by the slug wounds.

Warren Gamaliel Harding was the 29th president of the United States from 1921 until his demise in 1923. Surrounded by rumors of corruption from friends who he appointed to office, he took a trip to meet and greet the people of America.

During his return trip, he became sick with what was assumed to be food poisoning. On August 2, he likely suffered a heart attack. His wife was the last person to see him alive, which prompted speculation that he had been poisoned by her to avoid charges of corruption.

Franklin Delano Roosevelt was an American legislator who filled in as the 32nd president of the United States from 1933 until his demise in 1945. On March 29, 1945, Franklin D. Roosevelt went to the Little White House in Warm Springs, Georgia, to rest and recuperate after the strain of running reelection campaigns.

While sitting for a portrait, he fell unconscious and died of a cerebral hemorrhage. Vice President Harry Truman was sworn in to carry out the duties of President the same day. 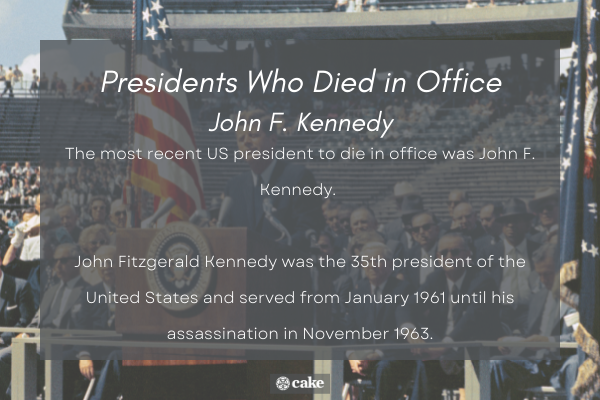 The most recent US president to die in office was John F. Kennedy. John Fitzgerald Kennedy was the 35th president of the United States and served from January 1961 until his assassination in November 1963.

He was lethally shot by Lee Harvey Oswald, who fired three shots from a 6th-floor window of the Texas School Book Depository at 12:30 p.m. as the presidential motorcade drove through Dealey Plaza. The motorcade rushed to Parkland Memorial Hospital, where Kennedy was pronounced dead. JFK's gravesite draws tourists from around the world and can be visited in Arlington National Cemetery.

US Vice Presidents That Died in Office 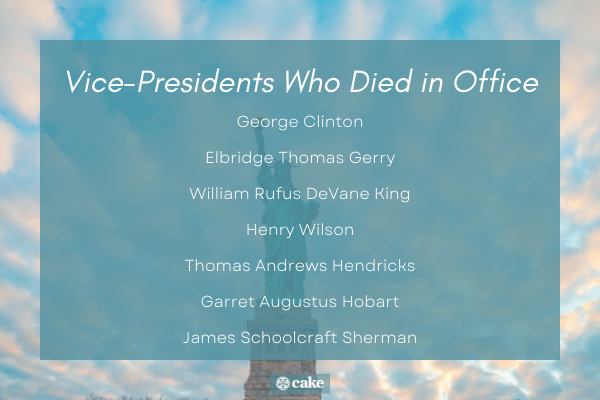 The Vice President of the United States is the second-most noteworthy official in the branch of the US government. After the President, the VP is next in line for succession and chain-of-command. The Vice President is chosen along with the President for a four-year term of office and is ready to step in to run the country if something were to happen to the President.

However, several times in US history, it was the VP, not the President, that needed to be replaced.

George Clinton was an American officer and legislator, considered one of the Founding Fathers of the United States.

He filled in as the fourth Vice President of the United States, first under Jefferson, from 1805 to 1809, and afterward under President Madison from 1809 until his death from a cardiovascular failure in 1812.

Elbridge Thomas Gerry was an American lawmaker and representative. As a Democratic-Republican, he served as the fifth Vice President of the United States under President James Madison.

On November 23, 1814, Gerry fell sick while visiting Joseph Nourse of the Treasury Department and died not long in after returning home. He is buried in the Congressional Cemetery in Washington, DC, with a commemoration by John Frazee.

William Rufus DeVane King was an American legislator. He was the thirteenth Vice President of the United States for about a month and a half in 1853 preceding his death. Though part of the winning presidential ticket, King left for Cuba with hopes of recovering from tuberculosis. He was sworn in while overseas.

Realizing little would change regarding his continuing deteriorating health, he returned to the United States and died one day after arriving home in Alabama. He was buried in a vault on the ranch and later reburied in Selma's Old Live Oak Cemetery.

Henry Wilson was the eighteenth Vice President of the United States and a congressperson from Massachusetts. On May 19, 1873, he endured a stroke that caused a loss of motion in his face and disabled speech.

His primary care physician told him to rest, yet Wilson permitted journalists to see him. On November 22, Wilson endured another stroke while working at the Capitol. This time, it was lethal.

Thomas Andrews Hendricks was an American lawmaker and legal counselor from Indiana who served as the 21st VP of the United States.

After already declining health, Hendricks died November 25, 1885, after a trip home to Indianapolis.

Garret Augustus Hobart served as the 24th Vice President of the United States. During his time in office, he expanded the influence and reach of his office.

After developing heart problems, he returned home to rest where he died on November 21, 1899, at age 55.

James Schoolcraft Sherman served under Howard Taft for one term starting in 1908. He was diagnosed with Bright's infection in 1904 and his health deteriorated during the 1912 campaign. He died at home in Utica, six days after his 57th birthday celebration and just days before the next election.

US history is full of amazing and hardworking Presidents and Vice Presidents. It’s little wonder that monuments, statues, and their famous gravesites are visited by people from around the world each year.