The internet is the birthplace for the majority of our modern jokes and memes, and these seem ever-present in society at times.

However, if you’re not familiar with the history behind the meme, you might find yourself feeling lost in the Facebook comments or a lengthy Reddit thread. The good news is there’s a world of information out there documenting these famous memes so you can quickly get up to speed.

One of these popular jokes actually has to do with paying respects and honoring the dead, making it incredibly common across the web. This is the ‘Press F to Pay Respects’ meme, and you might have seen it on websites like Reddit, Facebook, Twitter, Twitch, and video games. This meme originates from Call of Duty: Advanced Warfare, a military-themed video game. Today, it’s evolved to become a sign of digital respect. 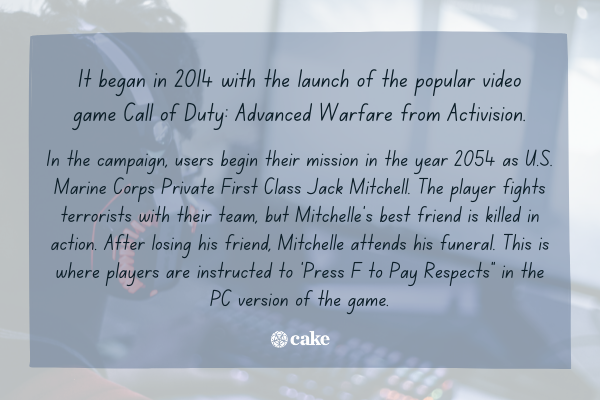 To begin, let’s talk about where these memes come from. To the uninformed, these jokes might appear to come from nowhere. The development of these memes often happens quickly. Unless you’re directly connected to the source platform, it’s easy to feel lost.

In the campaign, users begin their mission in the year 2054 as U.S. Marine Corps Private First Class Jack Mitchell. The player fights terrorists with their team, but Mitchelle’s best friend is killed in action. After losing his friend, Mitchelle attends his funeral. This is where players are instructed to ‘Press F to Pay Respects” in the PC version of the game.

Since the game’s launch, this scene received a lot of open criticism from players. While paying respects isn’t a new concept within video games, players think the way Activision goes about it in this sequence is disrespectful.

Not only are military funerals a very real experience for many, but they shouldn’t need to request players to ‘pay respects’ when that’s an understood social norm. Because of this criticism, content creators began making parody videos, comics, and memes all about this phrase.

What Does “Press F to Pay Respects’ Mean?

If you’re not very familiar with PC games, you still might not understand what the ‘Press F’ phrase refers to. When playing a game like Call of Duty on your desktop computer, the keyboard is used to control a number of functions. In the case of this scene, users quite literally press the F key on their keyboard to pay respects to the fallen soldier.

Once users press F, their character lightly pats the coffin, appearing to take a moment of reflection. This scene became iconic because there’s no other choice but to ‘Press F.’

Users aren’t given an array of choices about how to pay their respects or why they attended the funeral. What’s left is something that balances between hilarious and tragic. 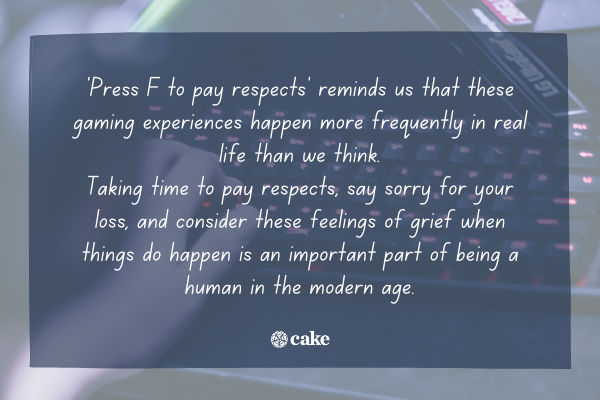 Today, the phrase ‘Press F to Pay Respects’ grew to include much more than Call of Duty memes. You’ll see the definition and interpretation of this request grow online—from being used as a sign of “respect” after someone does something embarrassing on Reddit to becoming a sign of mourning after a mass shooting.

In modern times, this cyber gaming phrase has become a way to offer your condolences after a crisis or tragedy. It’s no longer exclusively used by the gaming community. Those familiar with the meme in other forms have taken to using it across social media and even in real-life.

This phrase strikes a chord with many. It highlights something about video games that is easy to overlook. Namely, most gamers quickly press the skip button to get through the narrative and emotional moments in the game. It feels silly to participate in digital emotion, especially when gamers know the situation is fictional.

Yet, at the same time, ‘Press F to pay respects’ reminds us that these gaming experiences happen more frequently in real life than we think. Taking time to pay respects, say sorry for your loss, and consider these feelings of grief when things do happen is an important part of being a human in the modern age.

Though this might have started as a funny joke about an insensitive video game memorial, it’s become something larger than life. It’s hard to view a livestream without seeing a thick block of “ffffff” in the chat. While it’s true this phrase is fun to joke about, it’s also undeniably a powerful tool for connectivity and shared experience.

Grief is one of the most complex emotions, and it’s becoming to mean different things depending on the context. From memes on Reddit to social media memorials, technology affects the way we come together and express ourselves. You can even host a virtual funeral or memorial service on a platform like GatheringUs.

The way we interact with grief is evolving. Even video games grapple with these complex emotions, even though they don’t always hit the mark. At the end of the day, these games reveal the complexities of grief and challenge us to consider the role it plays in our own lives.

‘Press f to pay respects’ might be a meme, but it’s also a small-scale social movement. It’s a reminder to companies and creators that the way they represent human emotions matters. Simply asking players to press a button on their keyboard isn’t enough to create a real-world emotional response.

Since things like military funerals are a real experience for many, it takes much more than asking to press a button to remember a family member or loved one. The way people pay respect is often a deeply personal thing, and it’s not something that’s easily shown on the screen.

The next time you see the infamous ‘Press F to pay respects’ meme, you’ll know exactly what it means and where it comes from. While these cyber jokes often seem silly at times, it’s important to remember their context. Nothing exists inside a vacuum. This meme works so well because it exists in a world with very real grief and emotions.

‘Press F’ is funny because, deep down, we all know it takes much more than that to recover from the grief of a loss. It’s funny to consider a world where paying respects was that simple and straightforward. Until we find a way to replicate human emotions 100% through gaming, we’ll just have to settle for endless fs in the chat.

Digital afterlife Condolences & what to say