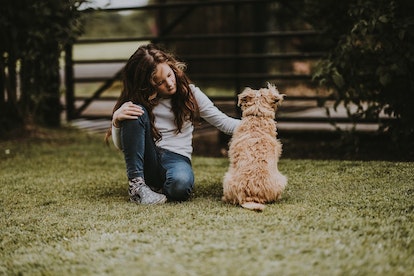 Beloved pets offer unconditional love and a special type of companionship that transcends language. Thus, it makes sense that we mourn them when they die. There are various ways to cope with this experience.

For example, you could keep a piece of your pet with you at all times with pet memorial jewelry. Some people also overcome their grief by suggesting a pet has simply crossed over the “rainbow bridge.”

As this blog will describe in greater detail below, although the idea of the rainbow bridge may have roots that date back to ancient times, pet lovers have essentially rediscovered it in the past few decades thanks to a poem which describes a bridge pets cross over to a happy afterlife when they die.

This has inspired others to write their own rainbow bridge poems, like the examples listed here.

Whether you’re looking for an ideal rainbow bridge poem for your dog’s pet memorial, or you simply need some comfort after saying goodbye to a dear canine companion, these poems can help.

The idea of a rainbow bridge that pets travel across when they die has gained renewed popularity in recent years.

Its origin, however, dates back to ancient history. Some believe the original inspiration for the idea was a Norse legend. This take on a rainbow bridge poem relies on that interpretation.

Although it doesn’t specifically name which type of animal it’s about, it’s ideal for a dog, as the imagery describes an animal running through the grass, sniffing the air, and generally behaving like a happy pup who’s regained their youthful spirit after passing away.

2. “Waiting at the Ferry” by David Lee Wharton

The metaphor of the rainbow bridge suggests our lost pets have crossed a divide to a land where they wait to meet with us again one day.

This poem uses a similar metaphor, describing a dog who has crossed a river into the afterlife but still waits at the ferry, knowing the humans they loved when they were alive will someday join them.

The simple image of a faithful dog waiting for its owner’s arrival perfectly captures how we like to imagine our pets’ experiences after death.

The idea of the rainbow bridge appeals to mourning pet lovers for many reasons.

A simple one is the fact that poems describe the world on the other side of the rainbow bridge as being a happy place, where pets enjoy every moment while waiting to meet with us again. Jan Cooper’s “A ‘Special Place’” describes this type of world in even greater detail, focusing on how the afterlife must have a special area designed just for the delight of dogs.

This poem may be particularly comforting if you’ve lost a dog who struggled with pain near the end of its life. It tells the story of such a dog, who rejoices when they cross over the rainbow bridge to a world where their pain is no more and they can play with other animals.

Instead of likening death to falling asleep, for this dog, it’s more akin to waking up to a happier existence.

5. "A Note to All our Friend(s) Who Wait at Rainbow Bridge" by John Quealy

This sweet rainbow bridge poem focuses on thanking our lost pets for the love and companionship they offered us in life. It specifically describes a pet with a “friendly bark and wagging tail,” making it fairly easy to imagine what type of pet author John Quealy was thinking about when he wrote the poem.

Like many of the other poems listed here, it also suggests the pets we’ve lost are waiting for a reunion that will surely come.

No matter how gentle their presence may have been, when a cat is gone, we feel the absence tremendously. Luckily, we can also take comfort in rainbow bridge poems that suggest our feline friends are never truly gone.

6. "Request from the Rainbow Bridge" by Constance Jenkins

Losing a pet is naturally a painful experience. However, as this poem expresses, a pet on the other side of the rainbow bridge would want their former owners to continue living a happy life after they’re gone.

Like many rainbow bridge poems, this one doesn’t include any lines referencing a specific type of animal, but its author penned a “rainbow bridge arrival” story indicating she wrote it for her beloved cat Isolde.

7. “Dreams and Chin” by Jim Rusciano

Like “Waiting at the Ferry,” this poem suggests our lost pets wait for us on the other side of a river we will ourselves cross at some point in the future.

The specific pet the author describes in this poem sits on his lap and sleeps on his pillow in happier times, much like a faithful cat might.

Many will find relating to this poem easy, as it focuses on the simple wishes people have when mourning pets, such as wishing to hear a “softly, rumbling purr” one more time.

That said, it’s still a hopeful rainbow bridge poem, describing how we may still reunite with our lost pets “in a far, far better place.”

This is another moving poem by John Quealy, which explores the pain we experience in the moments when we need to say goodbye to our pets, while also highlighting the hope we can find if we “dream of that special day and time when we’ll meet at the Bridge.”

It’s also general enough that it can offer comfort to basically any pet lover, and doesn’t need to only offer reassurance to cat owners.

Anyone who’s ever enjoyed watching a curious pet cat explore the world of nature will appreciate this poem’s imagery. It’s a short but moving poem about a happy animal roaming the fields and napping in the sun on the other side of the rainbow bridge.

Rainbow Bridge Poems for Other Animals

Dogs and cats are by no means the only pets that get to cross the rainbow bridge. These poems remind us it’s something all pets can share in.

11. "The Rainbow Bridge" by Paul C. Dahm or Anonymous

We get the modern idea of a rainbow bridge from one particular poem most people simply refer to as “The Rainbow Bridge.”

That poem naturally deserves a spot on this list, and despite the name of this section, it can actually apply to any beloved pet, including cats and dogs. Although many sources claim we don’t know the identity of the author, others claim a grief counselor named Paul C. Dahm originally wrote it.

12. “Rainbow Bridge: Sequel to the Original” by Jean McColgan

We might not know for certain who wrote the original rainbow bridge poem.

However, we do know this sequel to the original comes from Jean McColgan, who emphasizes the idea that we can reunite with our lost pets one day.

13. “A Bridge Called Love” by Anonymous

This poem offers comfort by expanding on the idea of the rainbow bridge.

It describes how the bridge of love we feel for our lost companions can help us remain connected with them even when we’re still alive and they’ve passed on. The poem explains how the love between a pet and an owner is so great that not even death can truly separate them.

Anyone who ever needs reassurance as they get over the loss of a pet should turn to this poem in times of pain.

Author Laura Hickman writes of a faint glow that lets all who see it understand “All is well up on that ridge, the place we know as the Rainbow Bridge.”

15. "Beyond the Rainbow" by Cate Guyan

This rainbow bridge poem is among the most reassuring poems about losing a pet because it offers two reminders: one, that the place on the other side of the rainbow bridge is a land of happiness; and two, that it welcomes all animals.

The idea of the rainbow bridge has become one of the most popular euphemisms for death among pet lovers because it symbolizes a beautiful and hopeful idea. These poems express that idea wonderfully.

If you're looking for more ways to memorialize your pet, read our guides on how to plan a pet funeral and how to turn pet ashes into diamonds.