Losing a pet is one of the most difficult experiences in life. A pet can be your life companion and your best friend, and saying goodbye is never easy. And just like we have euphemisms for death when it comes to human beings, there are death euphemisms about pet deaths. One of those euphemisms is the Rainbow Bridge.

If you’ve ever lost a beloved pet, you might have heard of the fabled Rainbow Bridge. The poem called “The Rainbow Bridge,” or verses from it, shows up in condolence cards for grieving pet owners, as well as books about losing a pet. You might even see “The Rainbow Bridge” hanging up in your veterinarian’s office.

What Is the ‘Rainbow Bridge’? 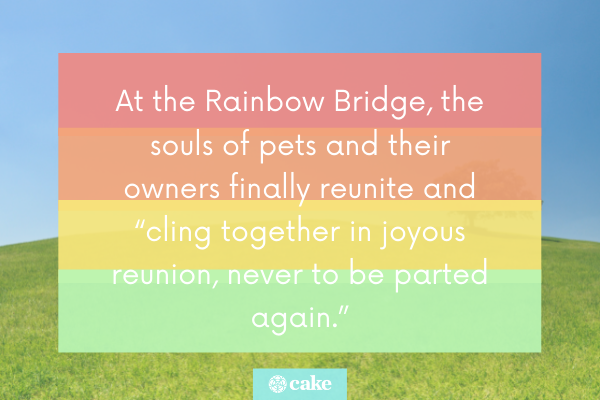 According to Rainbow Bridge lore, “Rainbow Bridge” is the name of a mythical meadow, as well as a bridge to the other side. Here’s how it works.

When a pet dies, they go straight to the land of the Rainbow Bridge. There, they find what’s essentially pet heaven, complete with acres of open land to run and play, and plenty of sunshine, food, and water. Rainbow Bridge also has magical qualities: sick or injured animals return to full health and vitality upon arrival at the Rainbow Bridge.

Value of the Rainbow Bridge

Anyone who’s lost a pet knows just how hard it is to say goodbye. In life, we never leave our pets alone for too long. They rely on us, and we rely on them. So being away from them permanently after they pass away is an impossible concept to grasp.

The idea of the Rainbow Bridge—an intermediate afterlife where our pets happily frolic until we join them—can bring immense comfort. We can imagine our pets living “in a better place,” as we so often do when a human in our lives passes away. And we can find solace in the thought that one day, we’ll finally join our beloved pets and walk with them over the Rainbow Bridge.

The Rainbow Bridge also offers an eloquent answer to the question: “Where do pets go when they die?” Children often ask this difficult question when they lose a pet for the first time. And adults also wonder where their pet’s soul goes after death. The Rainbow Bridge provides an answer (whether you take it literally or metaphorically) for children and adults, alike.

Where Does the ‘Rainbow Bridge Come From? 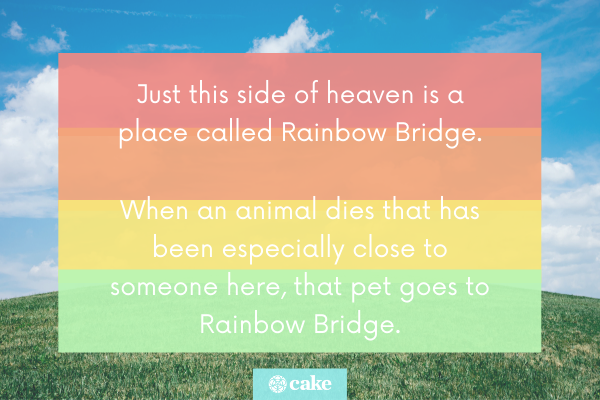 The idea of the Rainbow Bridge, and all of its lore, comes from one of several poems written in the 1980s. Several authors claim to have written the original version of “The Rainbow Bridge,” and the true origin of the term “Rainbow Bridge” remains unknown.

But one thing is sure: ever since it popped into existence, “The Rainbow Bridge” has inspired and consoled pet owners and pet professionals on a nearly universal level.

Versions of “The Rainbow Bridge”

Just as any work with unknown origins does when it reaches the public, “The Rainbow Bridge” has evolved over time. You can find many different versions of the poem, with verses tweaked towards veterinary care, children, or just according to someone’s preferences.

This prose poem by Paul C. Dahm is one of the most popular versions of the poem, and many consider it the original.

Just this side of heaven is a place called Rainbow Bridge.

When an animal dies that has been especially close to someone here, that pet goes to Rainbow Bridge.

There are meadows and hills for all of our special friends so they can run and play together.

There is plenty of food, water and sunshine, and our friends are warm and comfortable.

All the animals who had been ill and old are restored to health and vigor; those who were hurt or maimed are made whole and strong again, just as we remember them in our dreams of days and times gone by.

The animals are happy and content, except for one small thing; they each miss someone very special to them, who had to be left behind.

They all run and play together, but the day comes when one suddenly stops and looks into the distance. His bright eyes are intent; His eager body quivers.

Suddenly he begins to run from the group, flying over the green grass, his legs carrying him faster and faster.

You have been spotted, and when you and your special friend finally meet, you cling together in joyous reunion, never to be parted again. The happy kisses rain upon your face; your hands again caress the beloved head, and you look once more into the trusting eyes of your pet, so long gone from your life but never absent from your heart.

Then you cross Rainbow Bridge together...

Where you’ll see “The Rainbow Bridge”

Art prints featuring the poem quickly became go-to decals for veterinary offices everywhere. It appears in books about coping with pet death, and you can even find lines from the poem on pet headstones.

It’s clear that the poem, with its imagery of a pet afterlife and reuniting with departed pets, resonates with people from all walks of life.

If you want to explore the idea of the Rainbow Bridge, you can find it (or similar euphemisms and images) referenced in the works below.

1. The Rainbow Bridge: A Visit to Pet Paradise

This children’s picture book by Adrian Raeside brings the Rainbow Bridge to life with colorful characters. If your family has lost a beloved pet, a book like this might help your children understand where their furry friend went.

Some people believe the idea of a Rainbow Bridge came from a book called Beautiful Joe’s Paradise by Marshall Saunders. Published in 1902, the novel doesn’t include the phrase, “Rainbow Bridge.” But it does describe a lush paradise where animals find themselves after death. Instead of crossing over a colorful bridge, pets ultimately travel to heaven by balloon.

In 1998, Steve and Diane Bodofsky, a couple who operated a ferret rescue, published their own, rhyming version of “The Rainbow Bridge.” It was so successful that they went on to partner with a graphic designer to create Rainbow Bridge Fine Art Prints and Rainbow Bridge Sympathy Cards.

They created many of the condolence cards and prints, with the updated version of “The Rainbow Bridge,” which commonly appear in vet offices today.

Inspired by the idea of the Rainbow Bridge, creators and studios now create pet memorials in rainbow designs. They include multicolor windchimes, memorial plaques printed with a version of “The Rainbow Bridge,” and more.

Another likely source of the Rainbow Bridge concept is Norse mythology. The Norse mythological Bifrost Bridge was described as a burning rainbow bridge between Earth (Midgard) and the realm of the gods (Asgard).

So if you want to learn more about the Rainbow Bridge, you might want to turn to Norse myths and legends.

In the past few decades, we’ve started taking pet death more seriously as a source of grief. Recent studies show that losing a pet results in the same type of grief as losing a family member or friend. No matter who you’ve lost, whether pet or human, grief often looks and feels much the same.

Poems like “The Rainbow Bridge,” and similar resources, demonstrate the increased attention towards pet death. Although it first appeared in the 1980s, its use has grown over the past decade, and pet-lovers continue to find solace in its message.

If you're looking for more ideas to remember your pet, read our guides on turning pet ashes into diamonds and the best pet loss quotes to help you through.