Even though Randy Travis released some songs about breakups and bad decisions, many of his songs would be appropriate for your loved one's funeral service. Here are some pieces to consider.

We will include upbeat songs as well as those that are more somber in tone. Many of the songs on our list are from a Christian perspective or are well-known hymns that he recorded.

You might not know all the songs on our list. Take a moment to listen to the recordings online and read the lyrics. Make sure the song gives an appropriate message for the situation. 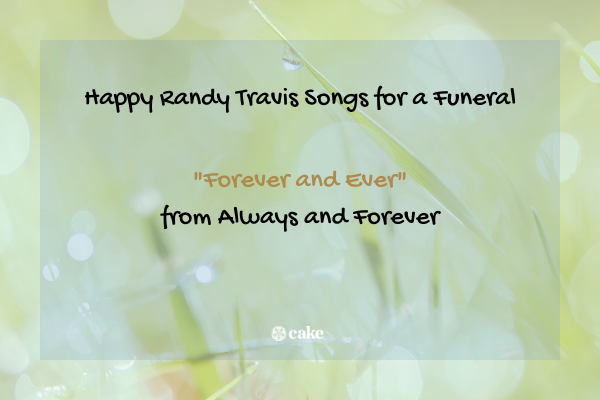 Are you concerned about using happy Randy Travis funeral songs for a funeral? In most situations, people attending a funeral understand that a piece of upbeat music at a service doesn't mean that the family is celebrating their loved one's death.

If you’re concerned that you might be sending the wrong message, you could have the officiant introduce the music by saying the song was one of the deceased's favorites.

In this quintessential love song, the speaker tries to describe the depths of his love by describing it as "deeper than the holler" and "stronger than a river." This would be a lovely song to play at a funeral when a spouse or partner survives.

2. "Forever and Ever" from Always and Forever

"As sure as I live, this love that I give is gonna be yours until the day that I die." This song is one of the most recognizable and loved songs by Randy Travis. Even though it is a relatively upbeat love song, it would be a poignant choice for a funeral.

3. "Pray for the Fish" from Rise and Shine

Was your loved one known for being a bit of a troublemaker? This song is about the baptism of someone similar. The preacher instructs those attending the baptism to:

"Pray for the fish
They won't know what's coming
When the sin starts rolling
Off the likes of him."

The speaker in this song gives up his fancy lifestyle to return to his simple roots. Although this isn't a typical funeral song, it might remind those in attendance of your loved one.

5. "I'm Gonna Have a Little Talk" from High Lonesome

This acapella song has an upbeat sound. The speaker discusses how difficult it is to maneuver through the world and thinks about what he will discuss with Jesus when he returns home that night:

"Gonna tell him all about my troubles
And I know he'll make them right
Then I'll ask him to forgive me
For the things that I've done wrong."

The speaker counts his blessings every night he prays because he knows that he "wouldn't have nothing if I didn't have you." 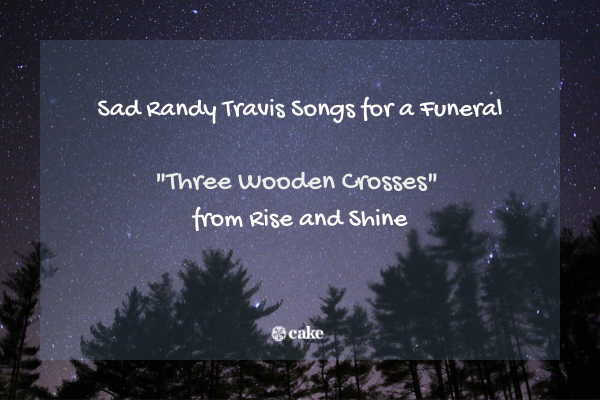 There are plenty of sad country music funeral songs. Here are some by Randy Travis that will indeed cause everyone to cry.

This song tells the story of a farmer, a teacher, a hooker, and a preacher on a bus ride to Mexico when a semi-truck runs into the side, killing three of the four. The prostitute survives and shares the story of Christian salvation with her son, who later becomes a minister. This song would be a great one to share in celebrating a life well-lived.

Are you looking for a sad Randy Travis funeral song that doesn't mention romantic love? This is your best bet. It celebrates long-lasting friendships.

9. "Forever Together" from High Lonesome

If you’re looking for a love song to play at a funeral that speaks about the ups and downs of a normal relationship, consider "Forever Together." The chorus reads:

Randy Travis Funeral Songs for a Parent or Grandparent

Are you looking for a funeral song for your dad, stepdad, or grandfather? Here are some by Randy Travis that might work for your situation. We will also include a few classic hymns on our list that Randy Travis recorded.

10. "Point of Light" from High Lonesome

Was your parent or grandparent known for their life of service? Perhaps they were a teacher, volunteer, or someone who gave hope to those without. If so, consider using this song for their funeral.

12. "Blessed Assurance" from Worship and Faith

This traditional hymn sung by Randy Travis may also be a good choice for your parent or grandparent's funeral. Travis recorded many classic Christian songs and hymns.

13. "Angels" from Passing Through

Consider this song for your mother's funeral. It celebrates the sacrifices moms make for their children.

14. "Dig Two Graves" from Around the Bend

Did your parent or grandparent die soon after the loss of a spouse or partner? This song is from the perspective of someone mourning that type of loss. It includes the line, "They can dig two graves, just carve one stone because without you here, I won't last long."

There aren't many songs written about stepdads. If you’re saying goodbye to that special person in your life, consider "Raise Him Up."

While most of these songs would not appear on a list of the best funeral songs of all time, they would be appropriate to play at your sibling's funeral. It's sometimes tricky to find such songs that speak of love but not romantic love.

The music video of “Whisper My Name” depicts a child's love, but it would be an appropriate song to celebrate any love.

This simple, beautiful song tells the story of the life and death of Jesus. If your sibling was a Christian, you might consider using this at their funeral.

Do you have lovely memories of your brother or sister from childhood? This song celebrates those easygoing, carefree days. If your sibling gave you confidence and made you feel that you could do anything, honor them with this special song.

Was your loved one a Christian and a Randy Travis fan? Perhaps you would like to celebrate both of these attributes by playing this song at their funeral.

21. "I Am Going "from Inspirational Journey

The speaker in this song looks forward to going to Heaven. He instructs his loved ones not to cry because "I'll be happy for the first time in years."

22. "Just a Closer Walk With Thee" from Worship & Faith

If you’re a fan of old hymns, you will surely like Randy Travis' version of "Just a Closer Walk With Thee." It is relatively upbeat and may be a good song for a funeral slideshow.

Choosing the Right Song is Hard

It's tough selecting songs for a person's funeral. Some people pick songs that describe how they’re feeling, and others choose songs that remind them of their loved ones. Still others choose pieces that reflect their faith. Randy Travis recorded songs that would work for all of those purposes.

If you would like a specific song to be played at your funeral, make sure you create a funeral plan and leave behind particular instructions. You can also select the flowers you want, your method of disposition, and your final resting place.

Your family members may know that you were a huge Randy Travis fan, but they may not know what song you wanted at your funeral. Make it easy on your loved ones and leave behind a plan.