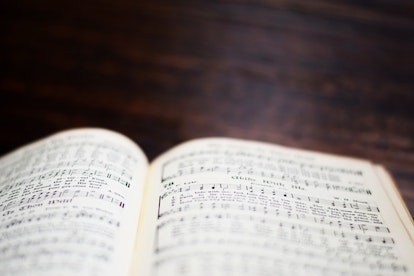 Playing music at funerals is a tradition that spans across cultures and religions. For centuries, songs and hymns have played a key role in the funeral process. Through music, we find a common bond in our times of suffering and grief. Music brings us comfort and helps us lean into our emotions.

Choosing songs that coincide with religious or spiritual viewpoints is important to many. If you are planning a funeral, virtual funeral service, or memorial slideshow, here are some faith-related songs to help set the tone.

COVID-19 tip: If you're hosting a Zoom funeral using a service like GatheringUs, test your audio before the ceremony so you can anticipate any day-of-the-funeral issues.

There are many songs about death. It may seem hard to choose the most meaningful ones for your loved one’s service. Here are some religious songs that might resonate with your beliefs about death.

Originally written by John Newton in 1779.

This Christian hymn was written by the American composer Dan Schutte in 1981.

A popular soothing Catholic hymn to ease fear and grief.

7. “One Bread One Body” by John Michael Talbot

This hymn is often played during communion at a Catholic funeral mass.

8. “Make Me a Channel of Your Peace” by Susan Boyle

A Christian Hymn of peace adapted from The Prayer of Saint Francis.

This song conveys faith in Heaven after the loss of a loved one.

Inspired by Revelation 21:4 “there shall be no more death, neither sorrow, nor crying, neither shall there be any more pain: for the former things are passed away.”

A story of death and the power of faith and grace.

This song evokes the hope and awe a person will feel when they meet God.

Adapted from the poem written by Carl Boberg into this traditional Swedish melody.

14. “What a Friend We Have in Jesus” by Joseph M. Scriven

A song of rejoicing in relief that Jesus will take your grief away.

15. “Go Rest High On That Mountain” by Vince Gill

A beautiful ballad about transitioning from life to Heaven.

16. “Abide With Me” by Scottish Anglican Henry Francis Lyte

Often sung by a chorus, this song brings comfort and guidance in times of loss.

17. “Nearer My God to Thee” by Sarah Fuller Flower

This Christian hymn was the last song played on the Titanic.

Written in 1912 by Evangelist and singer George Bennard. This song encourages rejoicing in the glory of God after death.

19. “When They Ring Those Golden Bells Sung” by Loretta Lynn

This religious hymn was written by Dion de Marbelle in 1916. It is about meeting Jesus and everlasting life after death.

Inspired by African-American spirituals, this song refers to death as going home.

A song that imagines a person rising from the dead and transitioning to heaven like Jesus.

22. “Jealous of the Angels” by Donna Taggart

A song that expresses the sadness of a deep loss and the belief that the deceased is among the angels.

This song is about embracing Heaven and forgetting the sins of life.

A comforting song to remind loved ones that after death we will be with God.

25. "The Lord Is My Shepherd" by Stuart Townend

Inspired by Psalm 23 in the King James Bible. It is a traditional hymnal in both Christian and Jewish ceremonies.

Overtly religious songs might not resonate with everyone. These secular funeral songs are spiritual and inclusive of all religions and faiths. Each of these songs attempts to explore a deeper understanding of the mystery of death.

26. “My Sweet Lord” by George Harrison

George Harrison wrote this song for the Hindu God Krishna. Its message can be applied to other Gods and secular belief in a higher power. You can check out our list of the best Beatles songs for a funeral if you'd like more from Harrison.

Leonard adapted the hymn “Hallelujah” into a secular version to explore love and loss.

28. “All That You Have Is Your Soul” by Tracy Chapman

This song suggests that within our bodies, we have everlasting souls.

29. “Somewhere Over The Rainbow” by Israel Kamakawiwoʻole

A lullaby that tells us about a magical world waiting for us after death.

This song explores unwavering faith and love as we approach death.

31. “Something’s Calling Me” by Jami Lula

This song takes us on an emotional journey to explore the grace in suffering.

32. “Death With Dignity” by Sufjan Stevens

A song that explores the complexity and beauty of death.

This song considers the concept that death is just a change of time, and may not be as finite as we think.

34. “Find The Light” by David Ramirez

A deceased person’s wish to the loved ones they are leaving behind. It encourages loved ones to find the light and not to mourn their loss too long.

In this song, the singer explores a connection to the divine after a tragedy.

This Hawaiian hymn was composed by Hawaiian Queen Lili'uokalani. The English translation is "Farewell To Thee."

37. “Into The Mystic” by Van Morrison

A classic tune that reminds us of our relationship to nature.

This popular tune reminds us that we are never alone, even in times of darkness.

A bittersweet reflection of gratitude and appreciation for a loved one.

A spiritual song about following nature and surrendering to the flow of life.

This song represents leaving suffering behind and transitioning into the afterlife.

42. “From A Distance” by Bette Midler

This song depicts God protecting us from a distance, even in times of loss.

A song about how even angels mourn loss.

Life and death is said to be like moving from dark to light. This song talks about traveling happily towards the light.

A song of hope and faith that at the end of life there is a place for us.

A reflection of a daughter's sadness after the loss of her mother. Her words 'Till we meet again…” imply hope that they will one day be together again.

This song is a sweet duet that conveys the heartbreak and sadness of saying goodbye to someone you love.

The angelic voices of the Celtic Women make a soothing addition to a funeral. The lyrics in English are: “Merciful Jesus, Who takes away the sins of the world, Grant them rest, Everlasting, Rest.”

49. “I Will Follow You Into The Dark” by Death Cab For Cutie

This song talks about trying to find peace with the knowledge that everyone dies.

A song about finding comfort and peace in the arms of an angel.

There are so many songs that we can choose from to convey our love and faith. Whether you are planning your funeral playlist at a Christian funeral or a playlist for a loved one's celebration of life ceremony, we hope these songs bring you peace.