After the loss of a loved one, it’s crucial to go through every step of the grieving process. While the funeral itself is a chance to heal and bond with family members, a funeral repast is an opportunity to reminisce about the deceased in a less formal setting.

When it comes to what to expect at a funeral, a repast is a standard part of the process. Unlike a funeral or memorial service, this is an opportunity to offer condolences on a smaller scale, without the pressure of a large event. Also known as a funeral reception or funeral ceremony, a repast is a casual affair for friends and family.

Post-planning tip: If you are the executor for a deceased loved one, you have more than just the funeral and repast to think about. Handling their unfinished business can be overwhelming without a way to organize your process. We have a post-loss checklist that will help you ensure that your loved one's family, estate, and other affairs are taken care of.

What’s a Repast After a Funeral? 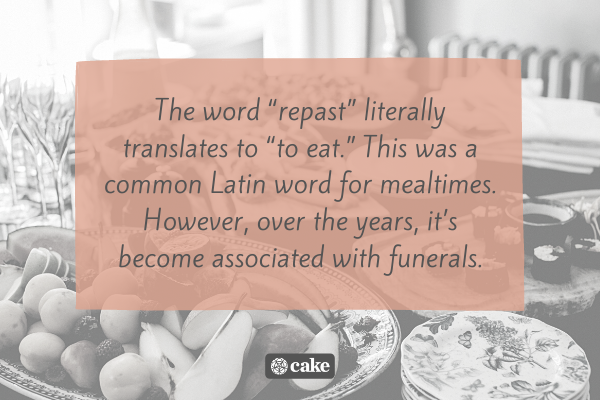 A repast is any gathering after a funeral service. You might have heard it called a reception, which is what it’s commonly known as today. Repasts are less formal than a funeral service or memorial. They are typically open to everyone who came to the funeral, though they can also be private, depending on the family.

What is the purpose of a repast? They’re a way to celebrate the life of your loved one and to come together as a family. Dealing with grief is much harder when you’re alone. Having family around you is the best way to process your feelings and feel supported.

The word “repast” literally translates to “to eat.” This was a common Latin word for mealtimes. However, over the years, it’s become associated with funerals. Now, it’s a tradition for breaking bread symbolically as a family after the passing of a loved one.

Repasts are usually informal affairs. They’re often hosted in a public reception hall, either in a funeral home, church, local community center, or restaurant. They might be an entire meal or just snacks and drinks. Ultimately, it will depend on the wishes of the family.

What Usually Happens During a Repast?

The repast is an opportunity to offer condolences to the immediate family. For many families, this is an informal time to feel close to your loved ones. This emotional support is much-needed after a loss.

What exactly happens during a repast will vary depending on the family’s wishes as well as religious customs. You can read through the explanations below for further insight.

The location of the repast will typically depend on the site of the funeral. Most begin immediately after the service, so it’s not uncommon for the repast to be in a church, community center, or funeral home.

However, in modern times, some repasts are at restaurants or even in the family’s homes. While most repasts are open to the entire funeral guest list, sometimes they can be private events. Private repasts are almost always hosted in a family member’s home. These are limited to only immediate friends and family. You can always ask the hosts about the guest list if you’re unsure.

Traditionally, the repast after a funeral includes a full meal. The meal might consist of religious or culturally significant food and drink, but this will depend on the family. It could also be the favorite food of the relative who passed. Depending on the funeral costs, the repast could be catered or at a restaurant.

Even if there isn’t a complete meal served, there is usually some food and drink. This could be a light snack or hors d'oeuvres. Again, it depends on the budget and the family’s wishes.

The funeral repast is an opportunity to offer your sympathy to the family. While the funeral is a chance to honor the deceased, a repast is less formal. This is a time to celebrate the life of your loved one. Many repasts include family speeches, storytelling, and other forms of celebration.

Be respectful when offering condolences during the reception. Preparing a few words to say is an easy way to honor the deceased.

Customs will typically depend on the specific family and cultural beliefs. It’s not uncommon for repasts to include religious aspects, such as prayer readings or candle lightings.

Nowadays, there are more customs included in funeral receptions. Playing the favorite music of the deceased, offering an open microphone for guests, or sharing a tribute video are all common customs.

How Much Does a Funeral Repast Cost the Family?

The cost of the funeral repast will depend on several factors. The good news is that the family has a lot of options to customize the experience to their budget.

Here are the most critical factors impacting the price:

While the funeral itself can cost several thousands of dollars, the repast is flexible. For a repast hosted in a family member’s home with homemade food, it could be free. For one in a traditional venue with catering, it might cost anywhere from $150-500.

If you decide to create invitations for this repast or reception, here is our guide for wording funeral reception invitations. 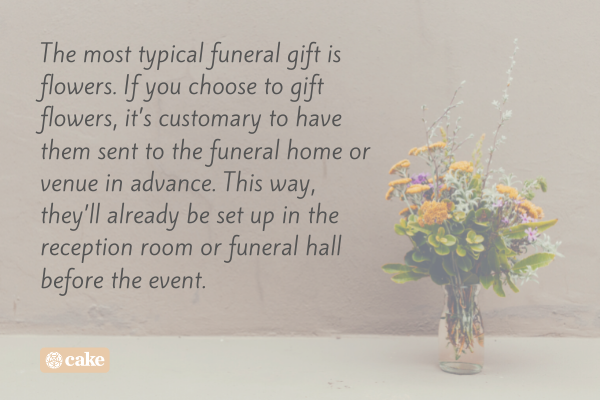 Before you attend a funeral repast, make sure you’re familiar with the expected etiquette. While these are casual events, you still need to act appropriately.

Since most repasts are immediately after the funeral service, it’s typical to wear the same clothes from the funeral to the repast. In most cases, this means wearing black or neutral colors.

Funerals are less strict nowadays when it comes to the dress code. However, being conservative in your dress is a way to pay respects to the family.

Funeral gifts are another way to offer sympathy to the family. It’s not usually appropriate to gift anything during the funeral service itself. That’s why many guests use the repast as a chance to deliver sympathy messages and gifts.

The most typical funeral gift is flowers. If you choose to gift flowers, it’s customary to have them sent to the funeral home or venue in advance. This way, they’ll already be set up in the reception room or funeral hall before the event.

Other than flowers, what is an appropriate gift for a funeral reception? When in doubt, ask the family what they need.

They might ask you to bring funeral food, silverware, drinks, or to simply help set up. Gifting your time is always a powerful way to show your support. Knowing what to say when someone dies isn’t easy. Show you care through your actions.

In addition, many families ask for donations to either help pay for the service or to give to a charity that was important to the deceased. Again, this is a way to honor your loved one and his or her family.

At a funeral repast, it’s important to be respectful. You need to be respectful of not only the deceased but also the family. This means being on time or being discreet if you’re late for some reason.

While at the repast, make sure your phone is on silent and avoid using any electronics. If you’re bringing children, make sure they know how to behave and are entertained. If food and drinks are being served, be modest with how much you consume. A funeral reception is a somber event. Though repasts are an opportunity to celebrate, you need to be respectful.

Make the Most of the Funeral Repast

Attending a funeral repast is another way to support the family of the deceased in their time of need. While the funeral service itself is a chance to focus on your lost loved one, the repast is a casual get-together for condolences.

A repast, or a reception, is sometimes the most important part of a funeral service. It’s a relaxed opportunity to give support and bond with friends and family. Suffering from the loss of a loved one is challenging. A repast after a funeral is a way to show support as a family.