There are a lot of sayings used after the death of a loved one. Most of these developed from religious traditions. Some of the most well-known phrases come from the Catholic church, which has strong, distinct beliefs about the afterlife and the persistence of the human soul.

In the Catholic afterlife, the soul either goes to Heaven, Hell, or Purgatory. The term ‘repose of the soul’ is a way to pray for the resting of one’s soul after death.

It’s common to hear references to or prayers about the ‘repose of the soul’ during a Catholic mass, but what exactly does this all for action mean? In this guide, we’ll uncover the origin and purpose of this phrase.

What Is a Catholic Mass for the Repose of the Soul? 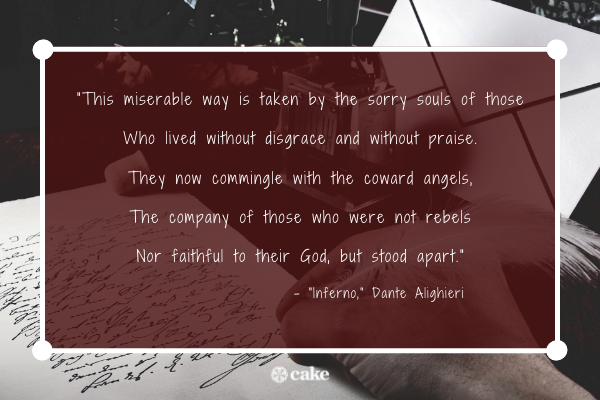 Death in different cultures often means a number of different things. Each part of the globe has its own belief system about what happens when you’ve taken your last breaths, and Catholicism is no exception. To understand the Catholic Mass for the repose of the soul, you must also understand a few things about the Christian afterlife.

The Catholic church believes that everyone is born with original sin. Since humans can not be entirely pure, they must do what they can to live a life as free from sin as possible. This means living in Christ’s image, following the teachings of the Bible, and being a kind individual.

For those that follow this closely, an afterlife of peace and comfort is guaranteed in Heaven. For those that choose a life of sin, they’ll spend the rest of eternity facing punishment in Hell.

However, it isn’t that black and white. There’s a middle ground in Catholicism known as Purgatory. This is where those who believed in God but committed some sins spend their time until their souls are pure enough for Heaven.

According to Dante’s infamous Inferno, there are many layers to Purgatory. In his epic poem, Dante describes those in Purgatory with unsettling language:

“This miserable way is taken by the sorry souls of those
Who lived without disgrace and without praise.
They now commingle with the coward angels,
The company of those who were not rebels
Nor faithful to their God, but stood apart.
The heavens, that their beauty not be lessened,
Have cast them out, nor will deep Hell receive them —
Even the wicked cannot glory in them.”

Here, those in Purgatory are described as those not good enough for Heaven, nor bad enough for Hell. They linger in-between, waiting for the day they’re pure enough to finally join the angels in Heaven.

The Masses for the repose of souls is a time to pray for those who don’t live out their afterlife in Heaven. It’s for the departed souls resting in Purgatory, awaiting whatever comes next. It’s believed in the Catholic faith that the soul will enter the purity of Heaven once it’s completed its time in Purgatory.

As such, the masses for the repose of souls is a Catholic tradition for honoring the dead. While most families believe their loved ones rest in peace in Heaven, realistically, this can’t always be the case. Even fallen souls are worthy of prayers. Though not all Catholics receive last rites or the eternal happiness of Heaven, they do receive these prayers.

Purpose of Repose of the Soul

Since the early days of the Catholic Church, it’s always been important to honor the dead. While most hope to spend the remainder of eternity in Heaven, not everyone earns this privilege. Still, Catholic followers are encouraged to pray for the repose of the soul.

The repose of the soul simply calls for the resting of the soul, wherever it may be. This prayer and saying relies on the understanding that no person on earth knows for sure where the dead go after they take their last breaths. There are no guarantees in Christianity. To live a life free from sin is the only way to achieve eternal peace in the afterlife. The rest is up to God, but Catholics still pray for peace, rest, and grace.

Popular Prayers During a Repose of the Soul Mass 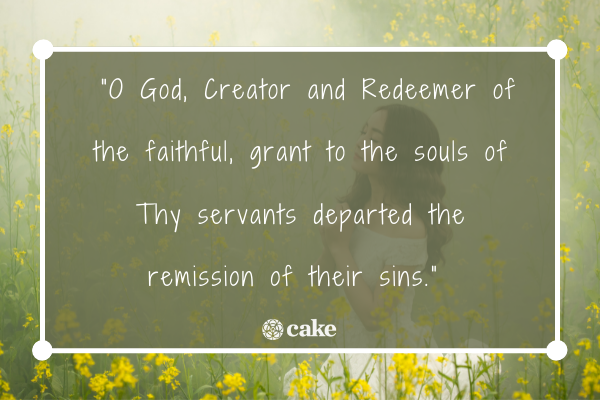 There are a lot of prayers for the dead in all religions, especially in the Catholic Church. While the living can’t affect the outcome of the souls once they’ve passed on, they can pray for their eternal rest and salvation. This is a form of comfort for many when dealing with grief and loss.

1. “Eternal rest, grant unto the Departed O Lord, and let perpetual light shine upon them.”

This prayer is a reminder that light shines upon all fallen souls in God’s image. May the deceased find eternal rest, wherever they may be.

2. “O God, Creator and Redeemer of the faithful, grant to the souls of Thy servants departed the remission of their sins.”

Another popular prayer is to wish the sins to be redeemed for the deceased. Through time, this is possible to find eternal peace.

Rest in peace is a common prayer for the repose of the souls. It’s a way to find comfort in a period of mourning, knowing a loved one is finally at rest.

4. “Let us pray for all the souls in Purgatory. May God have mercy on them.”

There are specific prayers for those in Purgatory, and it’s a call for God’s mercy and kindness.

5. “Gracious Father, please have mercy on his/her soul. Grant comfort to her family and loved ones.”

The prayer might also include kind words about the family of the deceased. It is the bereaved family who needs the most support during these days after the death of a loved one.

6. “Holy Mary, Mother of God, pray for us sinners, now and in the hour of our death. Amen.”

A prayer for the repose of the souls is ultimately a prayer for all. Since everyone is a sinner compared to Christ’s image, our prayers must continue throughout our lives and even after death.

7. “We pray today for the repose of souls of the Departed. May the Lord grant comfort for those who grieve them.”

A prayer for the repose of souls is often simple like the phrase above. By calling upon eternal rest, the family of the departed finds peace of their own.

This famous prayer is a reminder that God is with the deceased, no matter where they find their final resting place. For families of the departed, this is a pleasant reminder that one’s devotion to God doesn’t end at the time of death.

9. “Spirit of wisdom and understanding, enlighten our minds to perceive the mysteries of the universe in relation to eternity.”

A prayer for the repose of the souls is ultimately a prayer for eternal peace and rest. For humans, the concept of “eternity” is hard to grapple with. Humans, with such short lifespans, will never fathom the true depth of forever, unless they follow the ways of God.

While this is the traditional Latin prayer for the dead, it is still common in modern Catholic mass services for the repose of the souls. Translated to English, this means when the light shines upon the dead, may they rest in eternal peace.

For many, the fear of the unknown leads to a lot of worry and anxiety around death. What happens after we take our last breaths? While the Catholic Church aims to answer these complicated questions with its own views on the afterlife, there still lies much uncertainty. Souls make their own ways in life as they do after, whether they rest eternally in Heaven, Hell, and Purgatory.

No matter where they reside in the afterlife, Catholics aren’t afraid to pray for eternal rest. The repose of the soul is a call for peace, no matter where that peace is achieved. There are no guarantees in life nor death, but this phrase has been used for thousands of years to comfort the families of the deceased.