Saying “rest in peace” is a common phrase to show comfort and sympathy over someone’s death, usually shared via social media or written in a card. The saying has been around for ages, originally translated from Latin as “requiescat in pace.”

For some, it has deep spiritual meaning. Some religions focus on resting in peace until a glorious resurrection. For others, it’s a phrase that’s only ironically used around Halloween.

“Rest in peace” can feel kind of hollow, given how much it’s used both colloquially and as a general phrase for condolences. In addition to the religious connotations, saying “rest in peace” might not be the words you want to say. If you’re looking for something different that aligns with your personal wishes to give sympathy or simply just wanting to say anything else, here are some other potential phrases.

Tip: If someone you know recently lost a loved one, our post-loss checklist can help them sort through the complicated tasks and challenges they might be facing.

Rest in peace quotes can be a dime a dozen. That’s because they express what we all want to—sympathy and compassion. Acknowledging the loss of a person by saying “they will be missed” can hit the right note. By being honest and admitting that you’ll miss their loved one is a good sentiment to share.

It also lets someone know that their loved one touched other lives, too. They aren’t the only one who’s going to miss their presence. 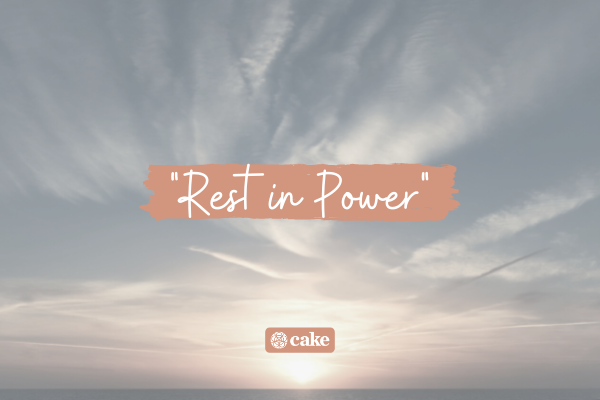 Some people don’t have any sort of religious or personal objections to the phrase “rest in peace.” “Rest in Power” is the opposite in a sense, in that you can recognize the meaning of someone’s life in an enlightening and powerful way (hence the word “power.”)

The saying was frequently used after the death of Trayvon Martin in 2014, to give meaning to his death. A lot of activists both online and offline used “rest in power” as a rallying cry to signal that the fight for equality lives on.

You can use it to pay tribute to someone who died unjustly, who was an activist, or someone who championed various causes during their lifetime. But even if neither of those things are true, rest in power evokes a very different image than its’ peaceful counterpart.

3. “He who has gone, so we but cherish his memory, abides with us, more potent, nay, more present than the living man.” — Antoine de Saint-Exupery, Writer

As a French writer who wrote during the first half of the 20th century, de Saint-Exupery lived through both World War I and II. As a French citizen, he saw firsthand the direct effects of both these wars on his country. From wars to economic woes to Nazi occupation, de Saint-Exupery’s homeland was tortured.

Given his exposure to so much volatility and grief in those years, it is no surprise that Saint-Exupery was able to wring out his emotions through his written words. Of course, all of us want our loved ones to be with us. But by cherishing their memory, we may be motivated to act differently, and better, than if they were still with us. 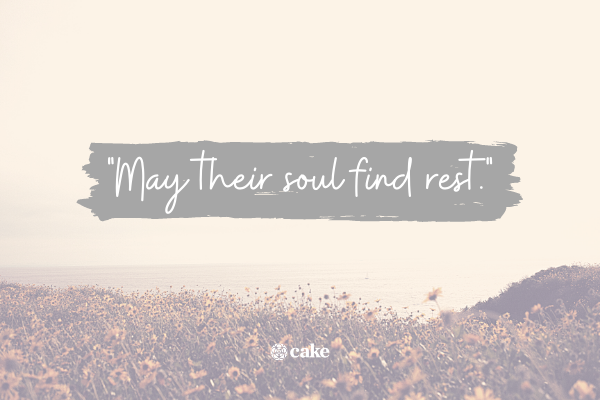 Maybe the person you know doesn’t believe in a peaceful rest but rather reincarnation or final judgment. Regardless of their particular beliefs after death, if they are inclined to believe in a spirit, this is a good quote to keep handy. If you aren’t sure whether this would be contrary to their beliefs, it’s probably best to refrain.

This saying can provide some softness, and could be good to include in a condolence card.

But under the stress of illness or death, it’s easy to believe that you’ll be forgotten. This quiet reassurance can mean the world, whether you’re talking to them or a loved one that needs a little comfort. This could work as a headstone saying, too, from one spouse to another. 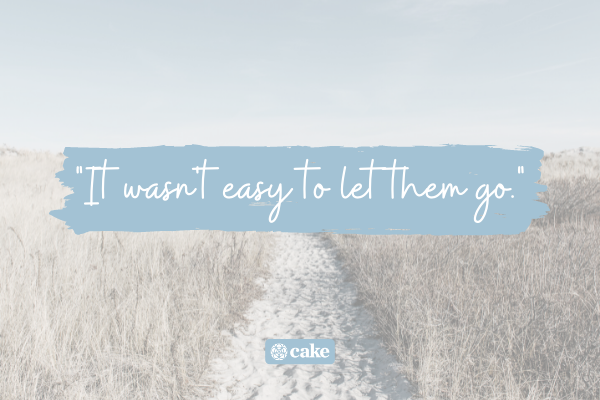 Sometimes, “rest in peace” is easy to write on sympathy messages.  But if you’re trying to say something in person that accurately reflects your sympathy and compassion, go for it. Some folks that are grieving may not be comforted by platitudes. And many people are afraid of hurting them right now.

While that’s incredibly kind, many grieving people can feel uncomfortable being handled so carefully. Rather than sugar-coating it, by assuring them that their loved one is “in a better place,” admit how hard this has been.

If you’re trying to give condolences, this may not be the best choice given its directness. However, in today’s society being afraid of death is normal and mostly considered to be the status quo.

It happens to everyone. It ends all lives, hopefully after a long, rich existence. But it will always happen—and that’s why you should try to work on your end-of-life plan. This quote speaks to the pragmatic at heart and if this describes your friend or loved one, this may provide a small measure of comfort.

8. “There are no goodbyes. Wherever you’ll be, you’ll be in my heart.” — Gandhi, Activist and Politician 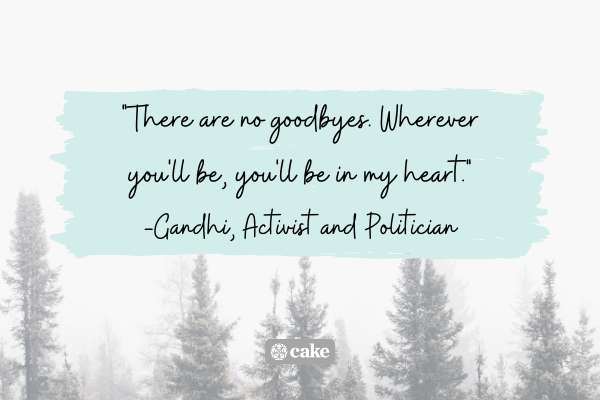 Despite the finality of death on this mortal plane, that does not mean that our loved ones will be gone forever. For those who grieve the death of a family member or a loved one, their memories might be the most precious things they have left.

With this quote, you can offer sympathy and also words of hope. Religious or not, anyone can tweak this saying to include it in a card or on a social media caption.

9. “Those who walk uprightly enter into peace.” — The Book of Isaiah

This is the perfect quote if someone is Christian or Jewish. The book of Isaiah is included in the Christian Bible, and Isaiah is a crucial foreteller of the Messiah in Jewish tradition.

If you’d like to include both faith traditions, this is a great quote to do it with. For those who rely on their faith to get them through tough periods, this quote from the Bible can remind them of the heaven that is up ahead. 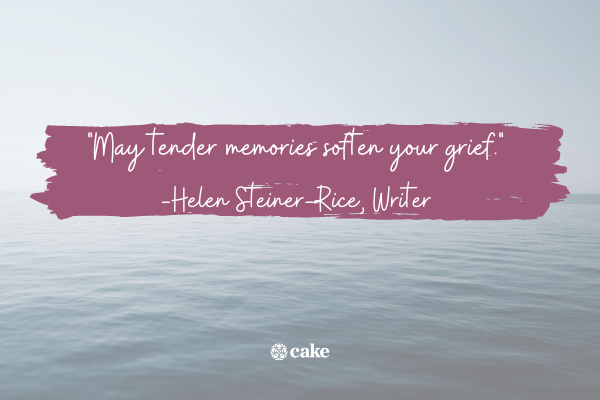 Like the Gandhi quote above, this one also benefits from its wide reach to everyone, regardless of their faith tradition. Helen Steiner-Rice hits a truism that can be hard to articulate when offering sympathy, one that can only be felt after some time has passed. Grief can be both sharp and endless, but it is not going to be that way forever.

If you are close to the person grieving, make sure to consider this quote. Was this a loved one that they had a rough relationship with? Is this a parent that didn’t raise them well? If so, this quote might not be the right one. If you don’t know what kind of relationship they had, it’s probably safe to send it. They’ll know you meant well.

Having a template in mind is a great idea. It can help if you’re trying to craft sympathy messages or a social media caption. And if you have the right words, it can make you feel more confident. If you’re confident, you’re much more likely to reach out when someone’s hurting.

But what if you’re talking to someone over the phone, or in-person? Saying “I’ll remember them” is a great start to the conversation. After you say that, though, what else can you do? The conversation will undoubtedly continue, and you might slip. Flying blind is scary, and it sounds cliche to follow your heart. Thinking about your words, and doing your best, is all you can do.

Condolences & what to say