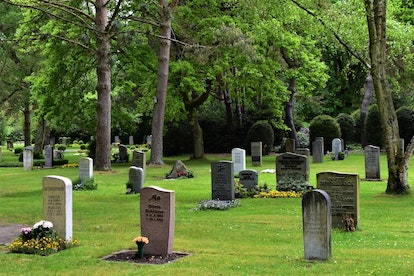 The phrase “rolling in their grave” or “turning in their grave” is one of the most common death puns in our culture. However, like many popular phrases, you might have heard these words so often that you never stopped to consider what they actually mean. After all, rolling in one’s grave is a pretty difficult (and unlikely) task.

This guide will clarify the topic. It explains what the phrase means and how it might have originated. It also offers a few examples from pop culture, helping you better understand the various situations in which someone might say a person is rolling in their grave.

Meaning of ‘Rolling in Their Grave’

When we say someone is “rolling in their grave” or “turning in their grave,” we’re expressing the belief that the actions or words of someone in the present conflict so much with what someone who has died would want that they’re rolling around in their grave in an effort to get out and correct them.

People using this phrase don’t literally believe someone is trying to escape from their coffin. The phrase simply conjures up an image that matches the sentiment.

There are many reasons you might say someone is rolling in their grave. The following are a few examples.

Sometimes a person’s beliefs or ideas get lost in translation over the years. For example, Charles Darwin introduced the idea of survival of the fittest, which claims organisms with traits that maximize their odds of surviving in their environments are most likely to pass on their genes. This is the basis of evolution.

However, some have misinterpreted this idea, saying that it justifies killing others (or at least allowing them to die) if they are “too weak” for their societies. On a smaller scale, some people also use Darwin’s ideas to justify why a little bullying is acceptable in school because it separates the weak from the strong.

Anyone who’s genuinely familiar with Darwin’s beliefs knows he wasn’t proposing those types of ideas at all. Thus, when some people twist his ideas that way, those who actually know what they’re talking about say Darwin is rolling in his grave.

Someone might also use the phrase “they’re rolling in their grave” if they feel a person’s behavior would upset a loved one or close personal friend who’s passed on.

For instance, if a rich philanthropist’s children squandered their inheritance instead of using it to help others, those who knew the deceased well would perhaps tell the children their parent is rolling in their grave.

Another reason to say someone is rolling in their grave involves people making claims about them that don’t match up with how they’d want to be remembered.

For example, although many older Disney works (as well as quotes from the man himself) reflect undeniably problematic ideas, those who’ve researched the topic deeply tend to conclude there’s no evidence to support the notion that Walt Disney was actively racist or an anti-Semite.

However, many people still claim he was. Regardless of who’s right, it seems Disney wouldn’t want people to remember him in that manner. Therefore he may be rolling in his grave when people make such claims as if they were the absolute truth.

“The way people misinterpret ‘The Road Not Taken’ these days would have Robert Frost rolling in his grave.”

“Your grandfather must be rolling in his grave over the way people who never knew the man are tarnishing his legacy now.”

Origin of ‘Turning or Rolling In Their Grave’

As with many popular idioms, scholars aren’t completely certain how this phrase originated. The following are some examples of its earliest usage. They might help us better understand when people started using it, and how it became more commonplace over the years:

In 1801, British Whig politician William Windham delivered a speech in the House of Commons claiming the country was giving France too much power as it worked towards peace between the two nations. He specifically claimed Britain's former leaders would “turn in their graves” if they knew about what was occurring.

It’s impossible to be sure this is the first major instance someone used a variation of this phrase, but many scholars consider it to be the first documented example.

The History of Pendennis

In the relevant passage, characters are discussing how the widow of a wealthy man not only fell prey to (false) rumors that he was a criminal, but that she also began a problematic relationship with a younger man shortly after her former husband’s passing. There’s reason to believe the phrase was in somewhat common use by this point, as it’s unlikely an author would include it in dialogue from a character meant to be an ordinary citizen.

This specific example may be apocryphal. We don’t know for sure if it actually happened.

According to Sir Arthur Conan Doyle, when English actor Henry Irving passed away and playwright George Bernard Shaw received an invitation to the funeral, Shaw said “Irving would turn in his grave” if he attended. This would be a reference to the fact that Shaw wrote many negative reviews of Irving’s performances. This is a third-hand account because Doyle claimed Irving’s son told him the story first.

‘Rolling in Their Grave’ in Popular Culture

The phrase “rolling in their grave” is so widespread now that it often appears in pop culture. Sometimes characters literally say the words (or variations), and sometimes characters merely express the sentiment behind the phrase. The following are a few noteworthy examples:

I Know What You Did Last Summer

This ‘90s teen thriller offers an example of someone claiming a deceased loved one is rolling in their grave because their surviving family members’ behavior would deeply upset them.

The character Julie is secretly struggling with guilt over an incident in which she and her friends struck a pedestrian with their car, but decided not to tell anyone when they couldn’t find a body. The guilt has been so great she’s nearly failing out of college. In response to this, her mother says her father would be rolling in his grave if he could see what’s become of Julie.

Not everyone who says a person is rolling in their grave is actually making a valid point.

For example, in Gran Torino, a character expresses his racism towards the immigrants who’ve begun moving into his neighborhood by saying a neighbor who lived there before his death would turn in his grave if he could see what’s become of the area.

Although the phrase “rolling in their grave” or “turning in their grave” doesn’t technically show up in the latest Star Wars trilogy, there are scenes in which characters point out that Kylo Ren’s dedication to fulfilling Darth Vader’s mission completely ignores the fact that Vader turned away from the dark side before his death.

He’d be rolling in his grave seeing someone continue his legacy of evil.

Rolling in Their Grave: The Perfect Phrase for a Common Sentiment

People don’t always properly honor those who’ve passed away, whether they be family members, friends, enemies, or historical figures. When we see that happening, this popular phrase helps us say exactly what we feel.