Samhain is an ancient Celtic festival that takes place every year at the end of October. Most scholars and historians believe that Samhain is the origin of the holiday we know as Halloween. Samhain is also the origin of other fall holidays, including All Saints’ Day and Dia de Los Muertos, which have similar themes.

The festival of Samhain has, for centuries, marked a “liminal” time of year, when the afterlife and daily life on Earth overlap. During this transitional period, spirits and the living can intermingle. Today, many Druids, Wiccans, and Pagans carry on the tradition by celebrating Samhain worldwide.

It’s easy to see the similarities between the Celtic festival of Samhain and the modern celebration of Halloween. But there’s much more to Samhain than the few activities that carried over to our modern holiday. 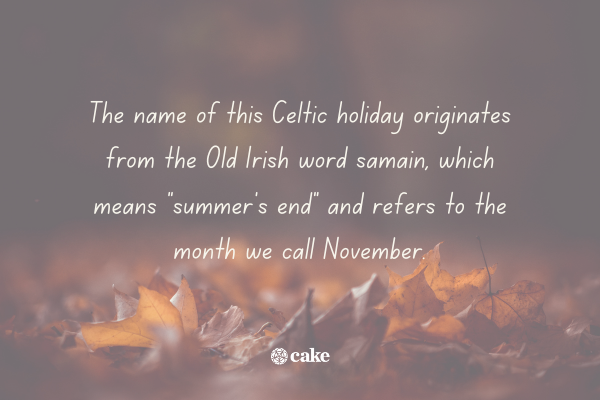 Samhain is a Celtic celebration marking the time of year when the transition to winter begins. It marks the separation between summer and winter, at the halfway point of the autumn season.

At its heart, Samhain is an agricultural festival. It was originally a time when agricultural communities would prepare for the coldest months of the year.

With its position at the “border line” of summer and winter (or lightness and darkness), Samhain also took on more spiritual connotations for the ancient Celts.

The name of this Celtic holiday originates from the Old Irish word samain, which means “summer’s end” and refers to the month we call November. You might also see it spelled Sauin, which is the Manx Gaelic form of the word.

Origins of the holiday

The festival of Samhain originated in ancient Europe as a “fire festival.” On the night of Samhain, the Celtic people would build a bonfire to appease the gods. They hoped that by showing thanks to the gods, the gods would in turn help regenerate their crops.

The ancient Celts thought of the year as two halves: light and dark. As the dark half of the year began in November, they believed that the world of gods and spirits became visible to mankind. And this could lead to trouble for the living.

With the line between the living world and the Otherworld blurred, the Celtic people believed the needed to take protective measures to avoid harm.

Samhain happens at roughly the midpoint between the Fall Equinox and the Winter Solstice. Most people in the northern hemisphere celebrate Samhain from sundown on October 31 through the morning of November 1. Others, however, hold their celebrations on different dates each year, depending on when the full and new moons rise.

Samhain celebrants who live in the southern hemisphere must observe Samhain at a different date on the Gregorian calendar in order to maintain the spirit of the holiday. Because the Fall Equinox and Winter Solstice differ depending on where you are on earth, many Pagans adjust their date of celebration accordingly. 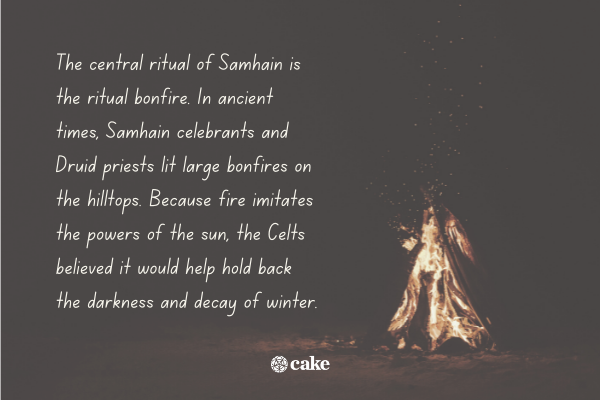 Samhain celebrations in ancient times came with many specific rituals and traditions. And those rituals weren’t just fun and games.

In fact, if you were a Celt in the Middle Ages, you would have likely been required to participate in the holiday festivities. If you didn’t show yourself to the local king or chieftain during the three-day festivities, the gods might punish you with illness or death.

The central ritual of Samhain is the ritual bonfire. In ancient times, Samhain celebrants and Druid priests lit large bonfires on the hilltops. Because fire imitates the powers of the sun, the Celts believed it would help hold back the darkness and decay of winter.

In turn, their crops would thrive and return after the cold winter months stronger than ever.  Participants often took a flame from the bonfire back to their own homes to light their hearths. The other rituals and traditions of Samhain would usually take place around the ceremonial bonfire.

One of the traditions that took place by the light of the bonfire was ritual sacrifice. Communities often sacrificed cattle or crops to show their dedication to the gods and to broker protection from evil spirits.

Burning the crops and cattle in the bonfire was a way to protect the community. And that was important because otherworldly beings with ill intentions could easily cross over to the world of the living at this time of year.

A Samhain tradition that crossed over to the modern era is the lighthearted practice of playing tricks on one another. Spirits were thought to cross over from the otherworld to the world of the living during Samhain, and they were expected to play tricks.

As a result, many community members (often children and young adults) took the opportunity to prank their neighbors and blame the events on otherworldly beings.

In addition to dressing up (known as “guising” back then), people often went from house to house requesting donations of food in exchange for songs or the recitation of verses. We can recognize this practice (mumming) as similar to the Halloween tradition of trick-or-treating, as well as the Christmas ritual of caroling.

Costumed parties, often comprised largely of youths, went from farm to farm. Householders who donated food could expect good luck and fortune through the winter, while those who refused could expect bad things to come.

Samhain celebrations weren’t all about death and appeasing the spirits. Some activities were just for fun and to show thanks for a plentiful harvest.

One of these games may be familiar to you if you’ve ever been to a Halloween party: apple bobbing. For the game of apple bobbing, participants would duck their heads underwater and attempt to retrieve as many apples with their teeth as they could.

Other games involved hiding items in food and offering food to animals. The results (which item you found in your cake, or how many animals ate your offering) could offer facts about your future.

Some Druids believed that the liminal quality of Samhain lent itself to telling the future. With so many spirits around, they could more easily make predictions about what was to come.

Around the Samhain bonfire, Celtic priests often offered fortune-telling sessions to interested attendees and to the community as a whole.

For the ritual known as “dumb supper,” families would open their windows and doors to allow ancestral spirits to enter the home. The family would prepare a meal, but they would wait until they’d invited their deceased relatives to enjoy the dinner first.

Over dinner, the family would converse with the spirits, telling them about everything that had happened over the previous year. Children would entertain the dead with games and songs until the spirits finally left after dinner.

Yet another tradition that translated almost directly to our modern holiday of Halloween is the practice of donning costumes and masks. Samhain celebrants often dressed up as animals, monsters, and beasts in an attempt to fool the otherworldly spirits.

How to Celebrate Samhain in Modern Times 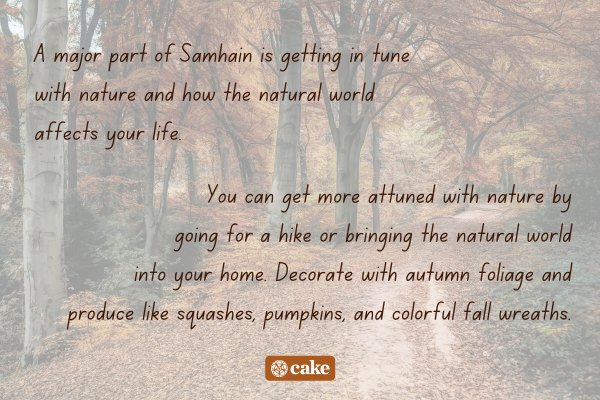 Modern-day Samhain celebrations are of course quite different from those of the past. If you want to pay homage to the ancient Celtic people or honor Pagan practices, consider some of the ways to celebrate Samhain, below.

The easiest way to celebrate the ancient holiday of Samhain is by observing our modern festival of Halloween. Through the years, with influences from Christianity and modern culture, the rituals of Samhain developed into the traditions we see each year on October 31.

But many of the rituals associated with Samhain are still present in Halloween celebrations, including dressing up in costume and playing tricks on your friends.

A major part of Samhain is getting in tune with nature and how the natural world affects your life. For the ancient Celts, it was the time to prepare for the cold winter months and bring an end to the harvest season.

For modern celebrants who buy produce at the grocery store rather than growing it themselves, it may be more difficult to connect with the transition from lightness (summer) to darkness (winter).

You can get more attuned with nature by going for a hike or bringing the natural world into your home. Decorate with autumn foliage and produce like squashes, pumpkins, and colorful fall wreaths.

The holiday of Samhain has seen a large revival since the 1980s with the growing popularity of Wicca. If you want to join others who appreciate the rituals and traditions of Samhain, you might be able to find a Pagan fire festival in your area.

A modern fire festival usually features a bonfire, as well as a communion with the dead. They might also involve a dance or “Witches’ Ball.”

Animal sacrifice is frowned upon in most modern cultures. But you can still give an offering to the spirits and fairies from the otherworld to honor the rituals of Samhain. You can leave a simple offering of food and drink outside your door for the nature spirits to enjoy on the night of Samhain.

An apple might make a good choice for your offering since apples have a strong association with the otherworld in Celtic tradition.

Samhain also has close ties to death. It falls at the end of the harvest season when the fields begin to freeze. For the ancient people who celebrated Samhain, the holiday was a time when they’re deceased ancestors could literally walk amongst the living.

Even if you don’t believe that to be true, Samhain is a good opportunity to gather photographs or other memories of your loved ones. You can honor them by lighting candles and saying a few words of thanks or taking a moment of silence.

Whether you’re preparing a Samhain celebration, or you’re just interested in the various ways different cultures see death and the afterlife, there’s always more to learn about the rituals of Samhain.

And while today’s holiday of Halloween might look similar in many ways to the ancient rites of Samhain, we often overlook the underlying meanings of those traditions. The next time you dress up in costume, bob for apples, or go trick-or-treating, you’ll know the origins of those ancient autumn rituals.