It can be difficult to cope with losing your mother or grandmother. For many, mothers and grandmothers play a huge role in your life. They can provide love, and nurturing care. Losing a maternal figure can be especially difficult.

One of the best ways to repay them for their care is to honor them with a well-written obituary. Here are some examples of obituaries for the maternal figures in our lives to help you write an obituary.

Tip: Writing an obituary is just one of the tasks you might be taking on for the first time when a loved one dies. If you need a little help with those tasks and the other challenges of loss, check out our post-loss checklist.

For a Stay-at-Home Mom 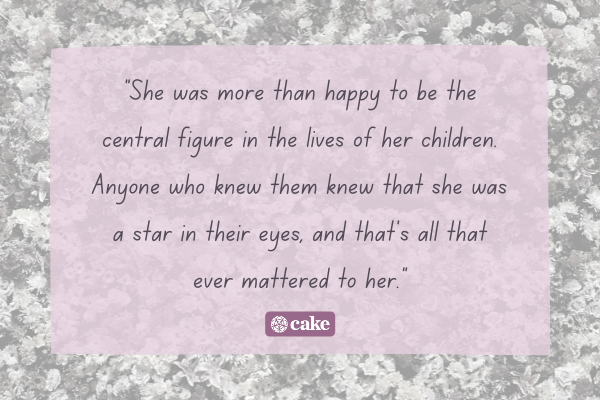 » MORE: Make your death easier for loved ones. Get your will done today.

“On October 6, 2019, Sarah James passed away peacefully at age 87 after a brief illness. Sarah was the biological mother of two children. However, many people considered Sarah their surrogate mother.

When Sarah’s children were young, the phrase “stay-at-home-mom” didn’t exist. It was usual for women to stay home with the children while their husbands worked. But even by the standards of the era, Sarah was an exceptional wife and mother. She cared deeply for her family and neighbors. She did this not out of obligation, but because of who she was. She was always the first to offer help. She regularly brought meals to the home of sick neighbors. And she always ensured that every child who crossed her threshold was safe, healthy, and happy.

Sarah is survived by her daughter Elizabeth Scott, her son Connor James, and four grandchildren. She was predeceased by her husband Robert.”

Born in Nashville, Tennessee, Dahlia didn’t share the dream of stardom that brings so many people to her hometown. Her dream was to get married and have children. She was more than happy to be the central figure in the lives of her children. Anyone who knew them knew that she was a star in their eyes, and that’s all that ever mattered to her.

Dahlia is survived by daughter Alice, son Jason, and husband Mark. A visitation will be held at Spencer and Sons Funeral Home on 1357 Main St. from 10 am to 12 pm. It will be followed by a burial service.”

Share your end-of-life wishes— including your obituary preferences— with your loved ones instantly.

Create a free Cake end-of-life planning profile to get started.

For a Mom Who Had a Long Career

“Lilly St. Claire of Santa Monica, CA passed peacefully away in her sleep on October 15, 2019. She was 70 years old. A lifelong philanthropist, Lilly began raising money for children’s charities after her daughter was diagnosed with severe allergies. She raised over a million dollars for the Santa Monica Children’s Hospital. Because of her zeal for fundraising, countless children’s lives were saved.

Lilly is predeceased by her daughter Chloe and her husband Paolo. She asked that in lieu of flowers, donations are made to the Santa Monica Children’s Hospital."

“Amanda Jones was known by many names. A professional romance novelist, she wrote books under a half dozen pseudonyms. But no matter how successful she was, she always said her favorite name was Mom.

Amanda’s career started almost by accident. She responded to a magazine ad looking for ghostwriters to pen short stories. Her writing style caught an editor’s eye. Soon they began collaborating on a series of books. Amanda had endless ideas and often worked on several manuscripts at a time. She was so prolific, she had to take on many pen names so she wouldn’t inundate the market. What she appreciated most about her career was the flexibility it gave her. Her favorite part of the day was when her kids got home from school.

Amanda is survived by her daughters Lauren, Rebecca, and Norah. They will share plans for a Celebration of Life ceremony at a future date.”

For a Mom with Many Children and Grandchildren 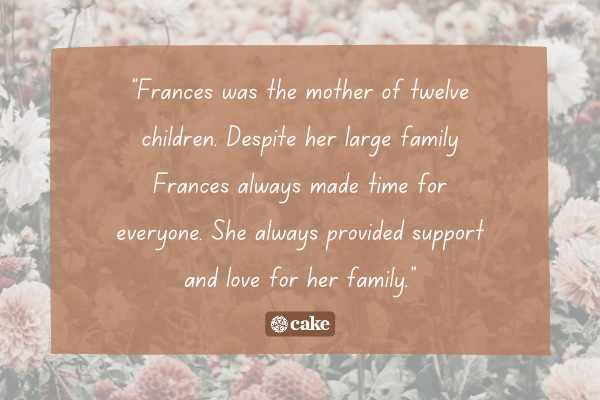 “On October 21, 2019, Frances Hill passed away peacefully in her sleep. She was 101 years old. A lifelong Nebraskan native, Frances was well-loved in her small town. Frances was the mother of twelve children. Despite her large family Frances always made time for everyone. She always provided support and love for her family. She and her husband Richard worked tirelessly to provide opportunities for their kids. She would proudly boast about all twelve of her children graduating from high school.

Frances was predeceased by her husband of 80 years William Hill, and by her son Richard. She is survived by her eleven surviving children, 26 grandchildren, and 14 great-grandchildren.”

“Roberta Stevens passed away on November 1, 2019, after a brief illness. She was 56 years old. Roberta was the proud mother of 8 children. She was mother to 4 biological children. And she adopted her 4 nieces and nephews after the death of her sister Rachelle. Roberta’s greatest love was her family. And all her children were proud to call her mom.

Roberta is survived by husband Thomas, her eight children, and three great-grandchildren. They invite you to join them for a homegoing service. The service will be this Saturday at 10 am at the Mount Zion Progressive Missionary Baptist Church on 2468 Main St. In lieu of flowers, the family asks that donations be made to the American Cancer Society.”

For a Mom Who Died Unexpectedly

Kelly loved children, which was a large part of why she chose to become a teacher. Helping young people discover a passion for learning was her true joy in life. Last year, she became a mother for the first time. Kelly would always say that the birth of her daughter, Stacey, was the best moment of her life.

While Kelly’s family grieves her loss, they are choosing to remember Kelly in a way that honors her spirit. Her parents John and Sally and her husband Antonio invite the community to join them in a Celebration of Life Ceremony. It will take place at St. Ignatius Funeral Home this Sunday at 2 pm.”

“Some people only walk this earth for a short time. Their departure reminds us that angels are watching over us. Last week, Farrah Smythe rejoined her heavenly family and gained her wings.

Farrah was a compassionate spirit whose passion was caring for others. She volunteered at a soup kitchen and worked as a nurse in free clinics. She did all this while caring for her two young daughters.

Farrah is survived by her father Jordan and daughters Charity and Faith. Her funeral will be a private ceremony for family members. Her father asks that in lieu of flowers, donations be made to a domestic violence shelter in her memory.”

For a Mom Who Died After a Long Illness 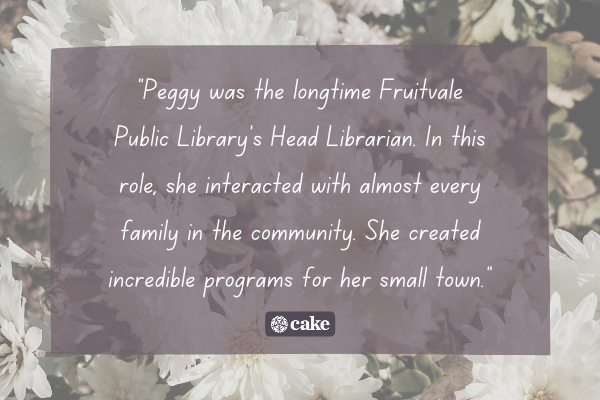 » MORE: Make your death easier for loved ones. Get your will done today.

“Eva Marie Crawford left this earthly realm on October 7, 2019, after a long battle with metastatic breast cancer. She was 46 years old.

It would be wrong to say that Eva lost her battle because she never stopped fighting. No matter how sick she was, she was always determined. When anyone else would have broken, Eva stayed strong. Through her, we know what resilience and perseverance truly look like. There was no quit in Eva. Just because she is no longer here, it doesn’t mean she lost her fight.

Eva is survived by her husband Geoff and their daughter Matilda. They invite you to join them for a memorial service at Miller and Daughters Funeral Home on Wednesday at 7 pm. All are welcome. Her ashes will be scattered at a future date.”

“Margaret Kent passed away on November 6, 2019, due to complications from lupus. She was 51 years old.

Margaret - or Peggy, as she was known to friends -  was a beloved member of the Fruitvale community. Peggy was the longtime Fruitvale Public Library’s Head Librarian. In this role, she interacted with almost every family in the community. She created incredible programs for her small town. Many of these programs would have been major feats in a large city. But her passion for serving led her to do monumental things with limited resources.

Though Peggy’s health was failing for years, few people knew the extent to which she struggled. Her joy for life and indomitable spirit kept her pushing through the pain.

Peggy is survived by her son Jack and granddaughter Samantha. Her family asks that in lieu of flowers donations be made to the Lupus Foundation of America.”

For a Mom Who Was a Widow

“Gracie Kellerman passed away on October 4th, 2019 after a brief illness. She was 84 years old.

Grace entered the workforce after being widowed at a young age. She worked as a secretary while raising her son. She played the role of mother and father in a time when that wasn’t common. Despite these struggles, she always provided a loving and warm home for her son.

Gracie never remarried after the death of her husband Wayne, who predeceased her by 55 years. She is survived by her son Bobby and her granddaughters Carrie and Diane.”

“Marie Louise Ryerson succumbed to pneumonia on November 3rd, 2019. She was 68 years old.

Marie was a fixture in the sleepy hamlet of Devon. Known for her shop that sold new and used books, she was rarely without a book in-hand. She had an encyclopedic knowledge of her inventory. And despite having no discernible filing system could always locate the right book.

While Marie remained active in her retirement, the loss of her husband Walt last year was a blow. Her family grieves her loss, but they take comfort knowing that Walt and Marie are together again. They are survived by their daughter Jeanette, son Cody, and seven grandchildren.”

Reflecting on Your Mother's Life

It can be hard to find the right words to pay tribute to the woman or women who raised and cared for you. But just like they tucked you in and told you bedtime stories, you have the opportunity to tell their story. Writing an obituary is the perfect way to pay tribute to someone who always did their best for you.

If you need more help planning your mother's funeral, read our guide on how to write a eulogy for Mom, funeral poems for Mom, and the best funeral songs for Mom.