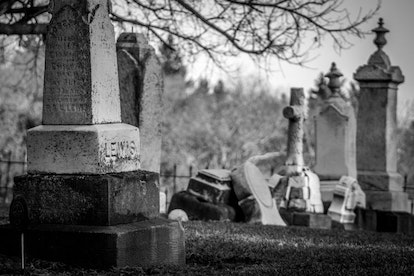 A love for history, a writer’s curiosity, or a desire to hunt for the paranormal — these are all reasons why people might add creepy cemeteries to their vacation itinerary. Given the timeframe of cemeteries in the United States, the oldest grave markers you’re likely to see go back to the 1700s. However, if you take your time while looking around, you just might recognize some of the names.

Cemeteries are more than places dedicated to the remembrance of those gone before. They’re places that record memories, histories, and can even offer some wit and wisdom if you take time to read the headstone quotes and sayings. If you’ve got a mind to visit a few cemeteries, some of these listed below are ones you may want to put on your list.

Scary Cemeteries in the South

Whether you love creepy places, are a taphophile, or you’re a history buff, these cemeteries of the south are places to put on your must-visit list. At a glance, they’re filled with civil war veterans, orphaned children, murderers, and a whole host of unknown and nameless paupers.

Regular visitors to Oakwood Cemetery mostly stay in the front, specifically the area that is properly maintained, beautifully manicured, and presentable. Occasional visitors to the cemetery, however, go for one reason - to wander through the creepy, back lot known as Hell’s Gate.

In the early days of America, there was a growing issue with poverty-stricken families having no money to properly bury their dead. To solve the problem, many cities established a Potter's Field - a sectioned off area in a public or private cemetery where poor folks could have their families buried. These areas also provided graves for orphans, wanderers, and a whole host of people who died without any family or money to their name.

Today, if you visit this section of Oakwood Cemetery, you may feel creepy vibes coming from all directions. Visitors have claimed all to experience all sorts of phenomena from seeing a ghost woman to feeling cold wind blow to seeing mists around unmarked graves.

Galveston, Texas has a history of natural disasters. In one such occurrence, over 8,000 people were killed when a hurricane struck land. Many people were buried in the Old City Cemetery.

Others were washed out to sea only to be washed back ashore. These bodies were cremated rather than buried due to their state of decomposition. It’s said that many of these people haunt the graveyard to this day. Perhaps they’re still looking for a final place to rest.

For those wanting a graveyard complete with creepy factor minus the haunting specters, the Old Scotch Graveyard is the place for you.

This old cemetery is filled with history including headstones that are so old that many are broken and some are even sinking. The graveyard is in the middle of a forest and, come fall and winter, the entire area looks bleak, desolate, and downright creepy.

While the name is dignified and the grounds are lovely, the earliest resident buried here might give you pause. The cemetery opened in 1750 and soon became the final resting place of many who got sick and died of yellow fever around the 1820s. Some who were laid to rest died from duels. Out of the approximately 10,000 people buried on the grounds, only 1,000 of them received tombstones.

Visitors report unusual sightings of those long dead and gone wandering the graveyard. Many believe those who wander because they never received a proper burial.

Scary Cemeteries in the West

In America’s early days, the Wild West was known for outlaws, miners, railroad workers, and families trying to make an honest living. Many of the cemeteries out west are now populated with the bodies of these intrepid adventurers and business folks.

This old 1800s cemetery with ancient headstones and gnarled, twisted trees is the site of two reported hauntings.

One, the mother of a convicted killer, is believed to haunt the grounds. She was originally thought to be an accomplice to her son’s heinous crime but was never convicted. The other woman, someone who committed suicide, is buried there and is said to roam the cemetery. Some visitors have even claimed to see her.

Built in the 1880s, this cemetery is so old it’s listed on the National Register of Historic Places. Though seemingly well-groomed and pleasant, it’s deceased inhabitants consist of miners, children who died of the flu and smallpox, and destitute European immigrants.

The creepy factor? Visitors claim to have experienced plenty in the way of paranormal activity including mists rising from graves.

Out of all the graveyards on this list, Boothill is undoubtedly the most famous and well-known. Why? Because this is the location of famous gunslingers and outlaws that fill pages in the history books of early America. The graveyard was in operation for a short six years from 1878 to 1884. Those buried here were so notorious that early residents of the city of Tombstone buried their family members in a cemetery at the west end of town.

Walking among such notorious people, you just might see one of their ghosts walk around and surprise you. Some visitors have claimed mysterious people showed up in pictures they took of the cemetery.

Scary Cemeteries in the Midwest

While the South and West have loads of colorful history, the Midwest has plenty of its own. As you’ll see from these locations, many cemeteries have stories to tell.

Sitting across the street from a church, you wouldn’t think this to be a creepy place at first glance. Stick around long enough, however, and you might change your mind.

The site originally served as training grounds and a camp for prisoners of war during the Civil War. The war was anything but “civil” and many soldiers died at this location due to malnutrition, disease, and exposure. Visitors and locals alike claim to see ghosts from the Civil War haunting the current-day National Park.

One such ghost is named The Woman in Grey because she is often seen in what appears to be a gray Civil-War traveling suit. Visitors have said they see her standing by the tomb of the unknown soldier and weeping for those who lost their lives.

As one of the oldest cemeteries in the area (so much so that it is also on the National Register of Historic places) you’d expect this cemetery to have a bit of a creepy factor. While the old tombstones and gnarled trees might send shivers down your spine, there’s something else that might cause you to shiver as well.

Visitors to the cemetery report being tapped on the shoulder and when they turn around, there’s no one there. This has become common enough that people call the phantom “the tapping ghost.”

This old cemetery is located in a forest and is still in use today. Wandering through the old tombstones and silent trees may feel like a walk through a scary movie. To add to the fright, you may consider visiting during winter when all foliage is gone or fall when tombstones are covered in leaves.

Visitors claim to have seen a mother watching over the grave of her son, a former groundskeeper for the cemetery, and a woman watching over her husband’s grave. Creepy enough for you?

Scary Cemeteries in the Northeast or Mid-Atlantic

The Northeastern or Mid-Atlantic states are areas that have cemeteries dating back to the days of early America. As such, you’ll see graves from the 1700s and beyond.

This cemetery dates back to the late 1800s and includes graveyards for Confederate and Union troops. There are also hundreds laid to rest during the Spanish Influenza and smallpox outbreaks in the early 1900s.

Established in 1869, the Spring Hill Cemetery replaced a smaller area originally designated as a cemetery when the city first began. While most of the cemetery is quite nice, you might guess where the spooky factor lies. That’s right - in the Potter’s Field section where the lonely and poverty-stricken found their end.

If you look around enough, you’ll come upon a tree in the Potter’s section with a grisly backstory. Local lore and legend maintain that the tree was used for lynchings. Who was lynched there is unknown, but visitors have claimed to hear the sounds of a man gasping for air along with the tree groaning under his weight.

This cemetery may not have made it into a Hollywood feature, but it could certainly earn a place in movies about cemeteries, and not for reasons you may think. On the outside, this national cemetery is well-groomed and boasts quite beautiful grounds. However, it’s also the final resting place of thousands of Civil War soldiers who were killed at the Battle of Antietam.

Given its residents, it makes sense that you might hear cannons fire and gunshots on a perfectly peaceful day. And, as visitors will tell you, that’s exactly what happens.

This old cemetery or graveyard has been known for displaying odd phenomena ever since its former caretaker passed away.

Visitors claim to have seen the man prowling around the graves and, if you are daring enough, knocking on the brick wall at the rear of the cemetery might summon him.

Cemeteries: A Place of History and Haunting

Cemeteries tell us a lot about what happened during various periods of history from the days of the Wild West to the Civil War to modern times. While we might not know about the individual lives of those buried, we can pay tribute to these people by respectfully visiting their final resting place. If you pay close attention, you might even see one of those historic figures show up.