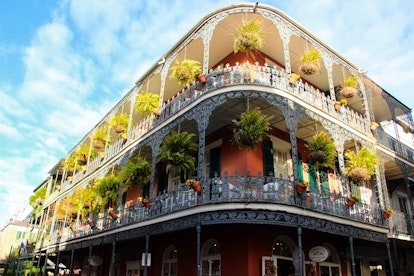 Second line funeral processions are part of a traditional New Orleans Jazz Funeral, which is a huge display of both sorrow and joy in New Orleans. Rather than solely mourning over a life loved and lived well, some NOLA residents send their loved ones off with fanfare and joy.

The people of New Orleans, and particularly those in the African American community, believe that life should be celebrated in the moment. That’s why during a funeral procession to the gravesite, community members mourn the deceased. When far away from the site, joyous jazz tunes fill the air in honor of a loved one’s life.

Second line is the name given to the procession that rallies behind the family of the deceased. It has become an art form and is sometimes even carried out in the absence of a funeral.

Second line practices can be traced back as far as the circle dances of the historic West African people. Africans brought to America had a hand in spreading the traditional circle dance.

Second line would have stayed a circle dance rather than becoming a parade if these incidents had not occurred:

Second line picked up momentum and over the years has flourished. It’s held, often spontaneously, either with a funeral or even without one. It’s also done to honor someone long gone or to uplift public morale after natural disasters.

The contemporary second line tradition is a combination of European military traditions and African customs. Though initially more somber, with the advent of the new jazz funeral in the 20th century, the second line funeral became a highly jubilant procession complete with a dedicated brass jazz band. Jazz changed both New Orleans funerals and the second line and transformed them into what we have today.

Today, two lines or groups of people make up the funeral procession. The first line consists of the deceased’s family, the brass band, and club officials. The second line builds up as people continuously join the procession as mourners and journey to the cemetery. The two lines are a personification of the circle dances performed by the African people to honor their dead. In it, children danced in a second circle within the one made by the adults.

The second line tradition is a unique way to celebrate New Orleans culture and the many races that make it so diverse. It has become an important part of the community and should not be missed if you happen to find yourself invited to one.

The second line has a few traditions and customs that the people of New Orlean follow through in every parade. These traditions are revered and honored.

A parade master is in front of the whole procession and he signals its start. Dressed in fashionable regalia for the somber occasion, he walks in front to lead all the people gathered to the correct gravesite. He also helps in setting the joyous dancing mood after the deceased is buried and the procession is far away from the cemetery in New Orleans.

No jazz funeral or second line is complete without the brass bands New Orleans is known for. The band moves in a practiced format and every musician has an assigned role:

After burying the dead, the brass band “cuts loose” and the funeral dirges change to upbeat,  festive songs. Songs like “Didn’t He Ramble” and “When The Saints Go Marching In” spill out from the funeral procession.

If the second line funeral is for a recently deceased person and arranged by the family, the coffin may be taken to the cemetery via a horse-drawn hearse. This is convenient since the first and second line will walk, strut, and semi-dance all along the route to the cemetery directly behind the coffin.

Dancing all the way

The people who have joined the funeral aren’t supposed to walk somberly but strut or dance along the way to the cemetery and back. Wear comfortable shoes because you’ll be dancing if you participate in the second line!

Handkerchiefs and parasols are a tradition. Onlookers will know for sure that a second line funeral is passing by if you wave your handkerchief or whirl a parasol in the air. In keeping with the somber yet joyful event, white or black colors are better than pink or any other color but the final decision is up to the organizers.

How Do You Get a Second Line Funeral?

Your first decision is to figure out how long you want the procession to last. Ideally, 20 minutes is enough since people will be dancing to the cemetery and anything longer will tire everyone out.

You can set the parade route for anywhere between five to 10 blocks. If you don’t know the location well, reach out to City Hall for parade route planning help.

File paperwork for a permit

To organize a second line funeral in New Orleans, you need to fill out a “Master Event Application” and “Supplement C-Parade Form.” Both are available online.

After filling them out, you’ll have to submit them at least 90 days prior to the event for approval. It’s possible to obtain permission for a parade up to 15 days before the scheduled event but it’s risky as there can be additional paperwork to sign and the potential of other events occurring during your preferred date. The permits will cost around $200.

After the permits are approved, City Hall orders the police department to offer their services. Two officers patrol the front of the line to prevent any vehicular obstructions, accidents, or violent outbreaks while a third officer follows the second line funeral at the rear in a car. These officers cost about $384 for a procession of around 300 people.

No second line parade can be a success without a brass band. Hire one to spice up the atmosphere. You can search on your own, ask for recommendations, or apply for help from companies like Frenchmen Street Productions.

Stock up on supplies

Buy as many handkerchiefs and parasols as you can since the second line will form and expand along the way and you might want to be prepared for the onslaught of people.

How Do You Find a Second Line in NOLA?

A second line is often organized by the family of the deceased but it can take more than word of mouth to make sure you’re in the right place at the right time. If you’re unsure of where the second line will take place, follow these tips:

Keep your eyes and ears peeled and you’ll find one in NOLA in no time.

Be Part of the Second Line

Death isn't easy for anyone but you can honor and send off the deceased with music and a smile just like the second line funeral procession practiced in New Orleans. It’s a truly awe-inspiring event so put it on your bucket list or plan one for yourself or a loved one.

Want to learn more about New Orleans and death? Read our guide on the best cemeteries in New Orleans.