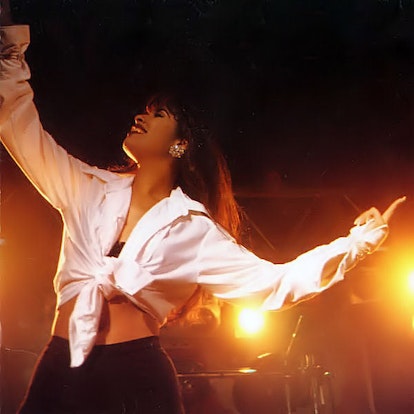 Along with being one of the most recognized stars in the Tejano music scene, Selena Quintanilla was a popular model, fashion designer, and actress. Thus, it comes as no surprise that many fans mourned when Yolanda SaldÍvar took her life. Selena Quintanilla was only 23 years old. Despite her young age, she had already made a substantial impact on pop culture, fashion, and the performing arts in general.

This brief overview will give you a better sense of how loved ones and fans reacted to this tragic death.

Tip: You might find yourself reading about celebrity funerals if you're planning one yourself. If you need help with any of the tasks you might face after the death of a loved one, check out our post-loss checklist.

As with many celebrity funerals and memorial services, Selena Quintanilla’s drew a substantial crowd. These details reveal some of the ways attendees paid tribute to the fallen star.

Prior to Selena Quintanilla’s actual funeral, her family arranged for a public viewing at Bayfront Convention Center (now known as the Selena Auditorium) in Corpus Christi, TX. This viewing attracted upwards of 60,000 fans.

In fact, despite the presence of so many fans naturally indicating that many who followed Selena Quintanilla’s career wished to show their respects, this was one factor that prompted her husband, Chris Perez, to opt for a private funeral and burial. He didn’t want the funeral to become unwieldy due to too many people.

It’s also worth noting that Selena Quintanilla’s influence was so strong that some fans who couldn’t attend her funeral or memorial still found ways to pay their respects in other capacities. For instance, in San Antonio, a number of fans gathered for a memorial mass at San Fernando Cathedral that took place at the same time as Selena Quintanilla’s funeral. This was significant because San Antonio was one of the cities where the star’s popularity first began to spread widely.

Additionally, upon learning of Selena Quintanilla’s death, many fans in San Antonio organized an impromptu memorial in the parking lot of South Park Mall. They gathered there, some holding candles, some gently swaying to various songs by the popular artist.

Information about specific funeral songs Selena Quintanilla’s funeral may have featured is difficult to come by because the official funeral was private.

Those that didn’t received almost non-stop calls from fans requesting they play her classics.

Tip: Today, many of our funerals take place virtually using services like GatheringUs. If you're hosting a virtual funeral for a loved one who was a Selena fan, you can play Selena's hits for your online guests. Coordinate with your facilitator and ensure you have the right digital file types, microphones, and speakers for a smooth experience.

Fans weren’t the only ones who made an appearance at Selena Quintanilla’s memorial viewing. Several significant Tejano singers also attended, including Ram Herrera, Bobby Pulido, David Lee Garza, and Emilio and Raul Navaira.

Just as fans had taken it upon themselves to organize informal memorial services for their beloved star, so too did many organize an unofficial procession after hearing the sad news. They slowly drove together past the home where Selena Quintanilla had spent much of her life. Some got out of their vehicles to place sympathy notes and cards in a chain-link fence around the property.

An official procession also took place on the actual day of Selena Quintanilla’s funeral. As her loved ones transported her body from the church to the cemetery, many fans also gathered along the road to watch.

Although Selena Quintanilla’s funeral was clearly significant to her fans throughout Texas, she also had fans throughout the country (and the world) show their respects.

For instance, on the day of Selena Quintanilla’s funeral, thousands of fans in Los Angeles gathered at the L.A. Sports Arena for a memorial service. This included a mass that church officials had actually already planned prior to Selena Quintanilla’s death. Their original intention was to include the mass as part of a two-day Latin American Festival.

However, Selena Quintanilla played such an important role in the lives of so many that they adjusted their plans and decided to dedicate the April 3 mass solely to her.

How and Where Was Selena Buried?

Selena Quintanilla’s funeral following the public memorial viewing took place on April 3, 1995. This was particularly upsetting for some because one day prior would have been her third wedding anniversary.

The Quintanilla family and Chris Perez chose to bury Selena Quintanilla in a private ceremony at Seaside Memorial Cemetery in Corpus Christi. The private nature of the ceremony has kept many specific details of it from the public. That said, just as tens of thousands of fans had attended the memorial viewing, upwards of 600 people gathered in crowds outside the cemetery tents.

How Did People Grieve and Memorialize Selena?

Along with the memorials mentioned above, fans and loved ones continued to grieve and memorialize their idol even after Selena Quintanilla’s funeral.

Mirador del la Flor, which translates to Overlook of the Flower, is a life-size statue of Selena Quintanilla that stands in Corpus Christi. Local artist H.W. “Buddy” Tatus sculpted it. Corpus Christi officials estimate the statue continues to attract about 30,000 visitors from throughout the globe every single year.

Fans who travel to Corpus Christi to see Mirador del la Flor also frequently make a stop by The Selena Museum. Selena Quintanilla’s family established the museum to memorialize their loved one and give fans a chance to continue learning about her life and career.

The Selena Museum features many of the star’s iconic stage costumes, as well as various other items of memorabilia. Luckily, if you’re a fan of Selena Quintanilla, but you don’t think you’ll have the opportunity to visit Corpus Christi any time in the near future, you can still view some of the collections online through Google Arts & Culture.

While this isn’t the same as actually seeing them in person, it’s a decent substitute when you can’t make the trip.

Along with Mirador del la Flor and The Selena Museum, Corpus Christi is also home to the South Texas Walk of Fame. This spot features stars bearing the names of famous figures relevant to the area embedded into the walkway. Selena Quintanilla isn’t the only figure to have a star in her honor at the South Texas Walk of Fame, but many feel hers stands out among the others due to its beautiful design.

In fact, Corpus Christi offers fans of Selena Quintanilla the chance to essentially plan their own unofficial memorial tour. For instance, fans can also stop by Swantner Park, which some may recognize as the location for a famous dance scene in the biopic Selena.

Others might also want to dine at Hi-Ho Restaurant. The Quintanilla family loved to visit it themselves, and after Selena Quintanilla’s funeral, the owners of the establishment memorialized her by decorating the walls with numerous photos of the star.

Fans who want to learn more about Mirador del la Flor can stop by the Corpus Christi Museum of Science and History as well. There they can see the original design and read up on the monument’s history.

As you might expect, Corpus Christi also boasts a gorgeous mural depicting Selena Quintanilla. However, it’s by no means the only city where you can find such murals.

For example, in L.A. alone, there are numerous Selena Quintanilla murals all throughout the city. This highlights how widespread her influence was. Similar murals appear in various other cities across the country, particularly in areas where Tejano music is popular.

People throughout the world often mourn celebrity deaths for a simple reason: the work celebrities create can have a tremendous impact on our lives. While a proper funeral certainly can’t bring these people back, it can give all of us an opportunity to celebrate their enduring spirits.