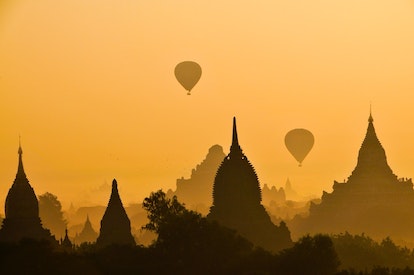 In the Sikh tradition, death is a natural part of life. To Sikhs, everyone is equal in the eyes of God. When one dies, the soul journeys back to God where it originated. Like other religions, Sikhs believe in karma. In life, each person has an opportunity to break the soul’s cycle of reincarnation and return to God.

Today, over 25 million people worldwide practice Sikhism and the majority of them live and practice in India. Sikhism is often confused with other religions like Islam or Hinduism, but there are key differences. In this guide, we’ll explore Sikh funerals and all of the traditions behind them.

COVID-19 tip: If you're planning a virtual Sikh funeral using a service like GatheringUs, you can still adapt many of these traditions, like shabads, prayers, and mourning, to include your online guests. Brainstorm with your funeral director, event planner, or religious leader to help you figure out the logistics or any limitations.

Sikh Beliefs on Death, the Afterlife, and Reincarnation

The word Sikh itself is Punjabi for “disciple.” In this faith, every person is a disciple of God. As such, everyone follows the teachings of the Sikh Gurus. In this religion, there is only one God, and he’s the same as the God for other religions, though he goes by several names.

Sikhs believe in reincarnation. They believe the soul cycles through many births and deaths before even reaching the human form. Living is a way to become closer to God. Death, in this tradition, is a way to break the reincarnation cycle. As the soul leaves this earth, it returns to God.

Death is a natural process. To Sikhs, humans cycle between “coming and going,” and death is the progression of the soul. Sikhs stay mindful of death during lifetimes so they can remain detached from the human form. These different beliefs about reincarnation and returning to God all lead to the Sikh funeral customs.

» MORE: Are you helping someone through a loss? Make sure you're on the right track with this post-loss checklist.

The funeral rites in Sikhism are known as antam sanskar. The term itself means “final rite.” If you want to know what to expect at a funeral in the Sikh tradition, these are the most common customs and practices.

Again, all Sikhs believe in equality. There is no caste system or gender divides. Because everyone is equal, funeral traditions are also the same amongst followers.

Most Sikhs believe in only cremating loved ones, but there are still specific practices around this process. These customs actually begin before death. First, relatives and friends gather at a Sikh’s death bed. This is especially true for the ill and elderly. Family and friends read what is known as the Psalm of Peach, or writings from one of the Sikh gurus. Prayers are also common as a way to console the dying person.

For the cremation, the family takes the deceased to the Gurdwara or Sikh house of worship. Hymns are read to bring feelings of consolation to the family. This service takes up to an hour.

Shabads are hymns in the Sikh religion. This could refer to the hymns in the Holy Text, the main scripture for Sikhs. It can also be another term for God.

Shabads are commonly read or even sang at funerals. These focus on feelings of hope and healing, so they’re powerful for family members. There are no funeral songs, only shabad hymns. While the family could choose their own favorites to read upon the death of a loved one, these are the most common:

There are many different death prayers recited at the time of death. Prayer plays a significant role in the Sikh tradition and brings families closer to God, from prayers at the dying’s bedside to final funeral prayers.

The most common death prayer is the Kirtan Sohila. This is a nighttime prayer in Sikhism. The name itself translates to “Song of Praise.” This is traditionally recited at the end of an evening ceremony, but it’s also a standard part of the funeral procession.

Because this is a nighttime prayer, it symbolizes the end of the soul’s cycle on Earth, no unlike the sun setting after a long day.

In Western traditions, black is the color of mourning, but this isn’t the case for Sikhs. Sikhs wear white as an indication that someone has died in the family. The family of the deceased adheres to Punjabi customs of dress, and they use color to express their sorrow.

For women, this usually means covering their heads with a white scarf. Men likely will wear white trousers and a white turban. The color white represents the purity of the soul. Family members could choose to wear white for weeks or even months after the death of a loved one.

Food is a large part of the Sikh funeral tradition. After the cremation, the family returns home for more prayer. At this time, neighbors and friends serve a meal for the family. The meal is a way to honor the deceased and care for the family in their time of mourning.

In the Sikh tradition, most followers adhere to a vegetarian diet. Because Sikhs consider closeness to God above all else, it’s essential to eat healthy foods. Most Sikhs choose not to eat any meat as a result of this Godliness. The dishes might include chana masala, paneer paratha, paneer tikka. Neighbors and friends will also serve tea.

Other rites and rituals

After the cremation, Sikhs pay close attention to the ashes. The family collects the ashes and scatters them. While Sikhs believe cremation is the best way to handle the deceased, ashes are likely to be scattered in water or buried at the site of the cremation.

Another ritual after the cremation has to do with the family. The family reads the Sri Guru Granth Sahib, or the principal scripture of Sikhism. This will be read either continuously over three days or non-continuously over ten days.

If you’re attending a Sikh funeral, there is etiquette to be aware of. In the Sikh tradition, most people maintain a detached demeanor. This brings believers closer to God. Because of this, it is not common to outwardly express grief or sorrow at the funeral service or cremation. Here are some other points of etiquette.

At a Sikh funeral, dress conservatively. While the family will wear white, there are no limitations to what colors other guests can wear. Men are expected to wear hats to cover their heads, and women should wear headscarves.

When you enter a Sikh home, always remove your shoes and cover your head. Sikh funeral guests typically wear Punjabi clothing styles, such as a kurta for men or a sari for women. Depending on where in the world the funeral takes place, this may or may not be the case.

Flowers and presents are not typical for Sikh funerals. Before bringing a gift or funeral flowers, talk to the family about their unique wishes. The best type of gift for the mourning family is to bring culturally appropriate food, usually a vegetarian dish, to the home after the funeral.

In Sikhism, most believers abstain from alcohol and tobacco, so these would also not be appropriate gifts.

Sikh Burials and Remembering the Dead

Sikhs do not believe in burying their dead. Though they might bury ashes after the cremation, there is no headstone or formal grave marker. Because everyone is equal before God, there is no need for any extravagance during or after the funeral.

However, Sikhs do remember their loved ones who have passed on. On the first anniversary of the death of a loved one, the family gathers together. There is a celebration of life, time for prayers, and a large meal. As mentioned before, Sikhs stay mindful of death throughout all stages of life.

Sikhism is a progressive religion with an emphasis on equality before God. Death is simply a part of life, and it’s treated as such through Sikh funeral traditions. Life is an opportunity to grow closer to God. Therefore, when a Sikh person passes on, their soul is returning home.

Sikhs don’t shy away from death. They keep it at the forefront of their daily rituals and prayers, hoping to break the cycle of reincarnation in the afterlife. These funeral customs above are a way for family members to pay respects to the grand scheme of life and death.