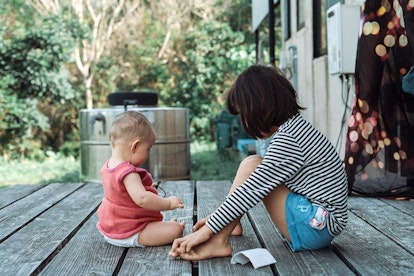 Are you trying to find the perfect quote for your sister’s eulogy? Or maybe you’re trying to elicit some comfort through poetry. Poets commemorate the wild, close relationship many sisters have.

Read through a few of our historical and contemporary funeral poems for some ideas.

Tip: You can use poetry to share your thoughts and feelings at a virtual funeral, too. If you're using a service like GatheringUs, your funeral facilitator will help work out the details.

Funeral Poems for a Sister from a Brother

Brothers and sisters often have the most complicated but endlessly loving relationships.

This poem is written from the perspective of a grieving brother. He lives in a broken family. His sister is gone and his father is drained by grief. His mother is like a shadow — all the life and joy has been sucked out of her. The narrator refuses to let his sister go. He writes poems to keep his sister close. He does it frantically, on his lunch breaks and whenever he can squeeze a moment in.

Sometimes he’s rewarded by seeing his sister’s ghost. They walk through the house together and the poems are the only things that tether his life to hers. Tethering a memory is much simpler. All it takes is to remember someone in your heart.

Shapiro’s poem was written for his sister, Sheila. Shapiro’s verses slowly wind through the stages of grief. He desperately wants to think of his sister without her death as the main focus. But that’s all he feels when he thinks of her, which adds even more pain to his loss. Eventually, Shapiro is able to think of Sheila without pain.

3. "To my Dear Sister, the Author of these Poems” by John Woodbridge

Puritan Anne Bradstreet was one of the first great American poets. Her verses offer a unique perspective on that particular time in American history. Not many people know that her brother was a poet, too. His verses affirm her talent as a poet and the power of her words.

Woodbridge’s entire poem becomes an ode to her talent. Even though he can’t hope to match it, Woodbridge tries to make up for his lack of talent by complimenting his sister. This is a perfect poem to read aloud for a sister who was particularly gifted in the arts and wasn’t afraid to share it with others.

4. "My Sister Sings Reba at Forty-Three” by Ephraim Scott Summers

Summers wrote this poem for his sister, Shawna, who works as a police officer. She serves in San Francisco and has seen horrible things happen to good people in her career. Summers muses on how strong his sister must be to continue doing this job every day. Every line of the poem is an ode to her strength and bravery, her willingness to be confident and authoritative every day.

Shawna’s outward strength isn’t the only thing that impresses her brother. He considers what it takes to do Shawna’s job. Her vast skill set makes Shawna extraordinary in her brother’s eyes.

5. "My Sister’s Keeper” by Unknown

Sister relationships aren’t always easy. Sometimes they’re complicated, loving, and full of hurt on both sides. This poem chronicles both adventure and pain, from getting tattoos together to sneaking out at night — but things change when one sister goes to boot camp. The physical distance begins to create emotional distance between them.

Things get worse when the narrator’s soldier sister prioritizes a man in her life. There’s no time to hang out and do things together. The poem ends with a powerful list of all the things that sisters can be when they’re united.

Funeral Poems for a Sister from a Sister

Growing up with a sister is a great gift. You have tons of special memories to treasure and comfort yourself.

Sisters can have the closest relationships imaginable. Clifton details how she and her sister grew up together. At the close of the poem, both sisters are in their mid-30s, having children of their own and making very special memories.

7. "An Order Prescribed, by Is. W., to two of her Younger Sisters Serving in London” by Isabella Whitney

Whitney’s poem is an extensive list of advice to her younger sisters. Even though they only cope with physical distance, it’s easy to read the poem as her last words of advice. Whitney hopes that if they follow her advice, they’ll be happy, financially comfortable and have good friends.

Whitney’s advice comes straight from the heart. It’s also informed by the religious traditions the Whitney family believed in. She suggests that they start each morning by praying to God. This long devotional period is meant to start their day properly. She closes the poem by saying she hopes the sisters reunite soon.

Boisseau’s playful poem is about sisters who sneak out at night. Boisseau reminisces about the trouble sisters can get into together.

9. "Sonnet for My Sisters” by Unknown

This poem talks about the author’s relationship with her three sisters. She highlights the difference between them and how much she loves each one.

Siblings are some of the most unique people we know. We know their flaws and quirks like no one else. Sometimes it’s the odd little things are missed the most.

Funeral Poems for a Sister from Another Loved One

Finding the perfect poem for a sister is challenging. Was she creative? Reserved? Wild? Chances are, you can find a poem that matches her personality.

Hall’s poem starts in 1943. It gently trails through a family’s history and pays homage to love that ties them together over the years. The poem’s main character is Rebecca, the keeper of family stories.

From the time her great-great-great-grandmother saw the first train come to town or those trains that take war supplies down the tracks, Rebecca remembers it all. As Rebecca walks along the railroad tracks, she eventually reaches the family cemetery. The names of her parents are on one gravestone there. Their family legacy continues as love supports their house and keeps them going.

This is a poem crafted from ethical questions and crushing guilt. Galvin’s poem serves as a partial celebration of sisterly responsibility and love. That love can spur you to do good things and it can hold you back from doing bad ones. The narrator in this poem considers what’s being done in the name of war. They slowly consider what helicopter pilots and special ops teams have done for war.

The narrator considers her sister for a long moment and wonders how she’d feel if the person affected by the violence was her sister? What if her sister was the one killed by the special ops team? What would you do or not do for your sister?

13. "The Sisterhood” by Marcia Hurlow

Hurlow’s poem pays homage to women who gather together for a cause. In this case, women take responsibility for domestic chores that have a huge impact. At the start of the poem, they band together to facilitate a seed company.

They pack seeds into colorful packages and send them out into the world. Once that’s accomplished, these sisters turn their attention to embroidery. Their attention to beauty and commitment to hard work changes things for their community.

This poem is an ode to the strength of women everywhere. Kizer muses over the power of women bonding together in sisterhood. She outlines how division results in oppressive laws and social mores. She asks that women slow down and stop feeling the need to be obsessed with superficial approval.

Kiser suggests that women bask in their own talent and intelligence and see where it gets them. This is a perfect poem if the sister you knew was an activist, ready to bond people together for a cause at a moment’s notice.

15. "Elegy for My Younger Sister” by Lucy Tapahonso

Tapahonso’s poem guides the reader through her sister’s funeral service and the aftermath. She starts by describing the valley her sister is buried in. It’s clear that this deep connection to the land is important to Tapahonso, even though it doesn’t comfort her.

Only at the funeral is she able to fully realize her sister’s true impact. Friends, schoolmates, relatives Tapahonso has never met … they all gather together to commemorate her. Even with all these people, and even though the cemetery is full of other family members, it seems wrong to leave her sister there.

There’s only one more thing she can do for her sister. The family gathers together to eat a meal in her honor. They remember all the dishes she cooked for them over different family occasions. It’s a final and important way for them to honor her life.

Most of your childhood memories are probably intertwined with your sister. Growing up together, graduating high school and college, getting married… you might associate many milestones with your sister. Turning to poetry might be cathartic. These poets suffered loss and dealt with loving, complex relationships, too. Their ability to turn emotions into words was their superpower.

You can benefit from this power by reading their work and think of happy memories of your sister. Looking for more ways to remember your sister after she died? Read our guides on how to create a tribute to a sister, what to do on a death anniversary, and how to say 'happy birthday in heaven, sister'.