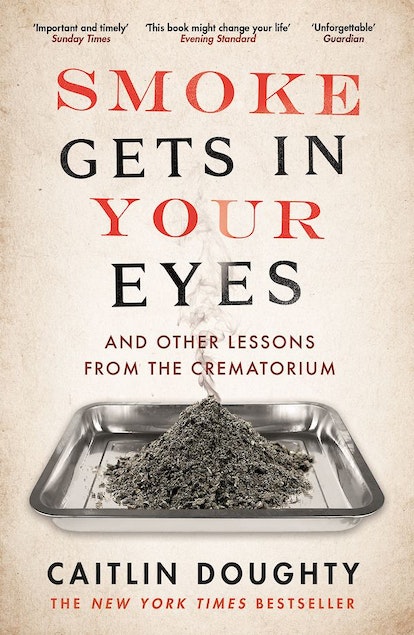 Confronting death isn’t always easy. For most, it’s downright intimidating. Smoke Gets in Your Eyes: And Other Lessons from the Crematory offers readers a first-hand account of someone who looked death in the eye daily. While this might sound like a horror story, Caitlin Doughty shares her experience with truth and endless wit.

Most of us can admit to having at least some curiosity or fascination with death. Whether it’s a passion for true crime podcasts or just idle thoughts, these types of questions are a reality of the human condition. Doughty doesn’t shy away from this fascination in her autobiography, Smoke Gets in Your Eyes.

Doughty knows more than anyone how hard it is to come to terms with what happens to your body after you die. Her eye-opening account of her work in a crematory doesn’t just explain what happens to bodies in funeral homes. It also makes a statement about how our society handles the larger question of what happens after death.

In this review, we’ll unpack Smoke Gets in Your Eyes by Caitlin Doughty so you can decide for yourself if it’s worth adding to your reading list.

Smoke Gets in Your Eyes Summary

Smoke Gets in Your Eyes is an untraditional coming-of-age story featuring Caitlin Doughty, a twenty-something recent grad with an interest in the grotesque.

With no experience other than her degree in medieval history, she takes a job at a crematory to make ends meet. She’s immediately drawn into a new world of end-of-life culture, practices, and care that she never knew existed.

With vivid descriptions of how dead bodies are cared for, Smoke Gets in Your Eyes pulls back the curtain on the funeral industry and the culture around death. If you’ve ever wanted an honest explanation about this taboo topic, this book is your chance.

Now a licensed mortician, Doughty uses her experience in the crematory to advocate for alternative funeral practices. Her book asks readers to confront their fear of dying, but it doesn’t stop there.

As Doughty writes, “Death is the engine that keeps us running, giving us the motivation to achieve, learn, love and create.” Through her experience, she urges others to live life without letting worries about what happens next get in the way.

Who Should Read Smoke Gets in Your Eyes?

Smoke Gets in Your Eyes is a book for anyone who plans on dying. If you’ve ever wondered what happens after death, questioned the cremation or embalming process, or asked why our funerals are the events they are, this is the book for you.

Doughty answers these questions and more with a sharp wit. Smoke Get in Your Eyes is the perfect introduction to the history of death culture, funeral practices, and beyond. It’s a not-so-gentle confrontation of the fear of death paired with real-life strategies for overcoming these negative feelings.

However, Smoke Gets in Your Eyes does have several graphic scenes. While generally light in tone, it includes graphic descriptions of dead bodies, the embalming process, and cremation. Doughty covers these topics realistically. If graphic descriptions make you uncomfortable, this might not be the book for you.

Similarly, Smoke Gets in Your Eyes is likely too mature for young readers. For young readers, review our suggestions for children’s books about death.

Smoke Gets in Your Eyes Discussion Questions

Smoke Gets in Your Eyes Star Rating

We all can’t help but be a little bit curious about what really goes on behind the scenes in funeral homes. Doughty welcomes readers into her world with contagious enthusiasm. Her respect for families, the profession, and the dead is clear from page one.

By the end of this book, readers will understand the culture surrounding current funeral practices. They’ll also be prepared to make tough decisions about end-of-life planning in their own lives.

This isn’t a heartwarming story, nor is it one of gloom and sadness. At times, Doughty is poignant and honest, such as when describing in detail the harsh realities of going to the hospital to collect stillborn babies for cremation. At other times she’s profane and hilarious. Never once does the book shy away from facing death head-on.

Whether she’s explaining the cultural differences of our varied death values or the cremation process, Doughty challenges us to reinvent our relationship with death. As she writes, “Death isn’t happening to you. Death is happening to us all.” Death is the great unifier, and it’s up to us to make the most of the time we have.

About the Author, Caitlin Doughty

Caitlin Doughty uses her book as a way to share her perspective towards death culture. Today, she’s a licensed mortician and runs her own funeral home in Los Angeles, California. However, she wasn’t always the death positive force for good that she’s known as today. Born in Hawaii, Doughty grew up with an interest in the morbid.

Though it’s hard to believe, her views of death weren’t always so positive. She struggled with thoughts of her own demise and that of her loved ones. Like most of us, she was afraid of what happened after death.

After graduation, she began her work as a crematory operator, mostly because it was convenient. This is where her story for Smoke Gets in Your Eyes first started. When reading the book, readers become intimately acquainted with her initial experiences as a crematory operator and body-van transport driver. With shocking descriptions like “a girl always remembers the first corpse she shaves,” it’s no wonder her story made such an impact.

Throughout the book, it quickly becomes clear how discontent Doughty is with the modern funeral industry. She returned to Cypress College to get a second degree, this time in mortuary science. In 2015, she opened what she calls an “alternative” funeral home.

Aside from her work as a mortician, she also is the force behind Order of the Good Death, a death positivity movement.

Smoke Gets in Your Eyes Is a Must-Read

After reading Smoke Gets in Your Eyes, it’s hard not to be a supporter of the death positivity movement. Doughty’s up-close-and-personal experiences with death are an addicting introduction into her world. Her story is a call to action to stop fearing your own end-of-life planning. Instead, it’s a reminder to live in the present moment.

Doughty believes the best way to cure the fear of death is to live a life well-lived. That’s something everyone can take comfort in, and therein lies the true joy of this book.

Thanks to this reading, it is possible to face these questions and taboo topics head-on. Doughty reminds readers that “looking mortality straight in the eye is no easy feat.” Yet, this is one of the bravest things we can do. Ignorance isn’t always bliss. Sometimes it only leads to more fear. As you’ll learn in Smoke Gets in Your Eyes, you need to fully embrace your own mortality if you want to truly live.

Are you inspired to continue learning about death? Check out our suggestions for books about death and songs about death.