Whether some songs are funny or endearing, each song is meant to convey a personal, yet indissoluble truth. Our strongest pull to aging seems to be the memories that flood our days like time without a pattern.

Many songwriters and musicians have crafted beautiful melodies and lyrics to sing to the siren that is aging, hoping to slow it down and lull it to sleep to stop it from happening.

Below is a collection of songs about aging and getting older ranging from swing to R&B and from folk to country.

Maybe one of these songs can help ease your anxiety about aging, or just make you feel more wisened thanks to the passage of time. 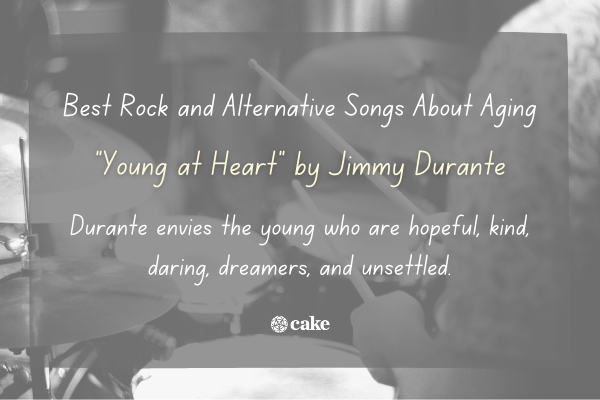 The artists below sing about their struggles with aging. It ranges from fear and sadness to restlessness and acceptance of death.

Stevie Nicks wrote "Landslide" in 1973 when she was a part of the British-American band Fleetwood Mac. The famous lyrics share a strong metaphor for important life changes after taking time to reflect.

You can tell by their hands how hard someone works—and how strongly they love. Bill Withers sings a beautiful elegy to the woman’s hands that helped shape him.

Lana Del Rey asks a legitimate question to her lover, "Will you still love me when I'm no longer beautiful?" Age does not diminish beauty, but society always makes it feel like it does.

4. "Young at Heart" by Jimmy Durante

Durante envies the young who are hopeful, kind, daring, dreamers, and unsettled.

It's easier to pretend the world will stay as you know it, but sometimes that all can come crashing down.

Everyone has a habit of reminiscing about the older, and sometimes better days, including Bruce Springsteen. Watching friends grow up, seeing hard times fall on loved ones, it's unavoidable to think of “the glory days.”

7. "In the Backseat" by Arcade Fire

One of Arcade Fire’s lead singers, Regine Chassagne, writes about missing her mother—the leader and driver in her life, providing security and guidance.

It all comes to a halt as she writes about how a mother's death catapults you into life's driver's seat.

Post-planning tip: If you are the executor for a deceased loved one, the emotional and technical aspects of handling their unfinished business can be overwhelming without a way to organize your process. We have a post-loss checklist that will help you ensure that your loved one's family, estate, and other affairs are taken care of.

When you grow up, there will be jobs, bills, and emotions with which to struggle. The singer wants to stay in his room to avoid all of that.

Lennon's lyrics begin with fear about aging. Later, there's less fear, but he still understands it's all just borrowed time.

The singer keeps returning to his 15th year with hopefulness. The rest of the years are filled with anguish or fear. 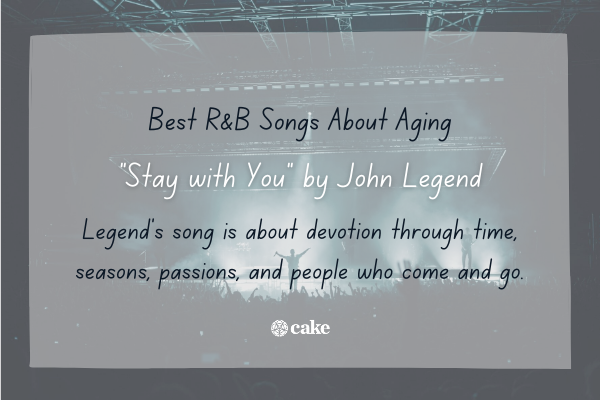 These mellow songs are about the passage of time, coupled with love's ambitions.

11. "I Believe in You and Me" by Whitney Houston

"I Believe in You and Me" was written for "The Preacher's Wife," starring Denzel Washington and Whitney Houston.

The song encapsulates the feeling of love and its stages throughout one’s life, and the freedom it provides.

Appearing on the album Hip Hop is Dead, "Can't Forget About You" is Nas looking back at the path and struggles he's had in life.

Legend's song is about devotion through time, seasons, passions, and people who come and go.

"Let's Stay Together” is about a man telling his long-time love that he appreciates who he's become with her.

15. "We Belong Together" by Mariah Carey

Mariah Carey is one of our generation's most celebrated songbirds. "We Belong Together" is Carey's ballad to missing a loved one and wanting them back.

16. "Always and Forever" by Luther Vandross

Luther Vandross was one of the prolific R&B songwriters of his generation.

Throughout his career, he won eight Grammys and recorded sixteen albums. This is one of his biggest hits, all about seeing the best with a loved one at his side.

"Here I Stand" is Usher’s song for his wife at the time. His soulful voice provides a mellow tribute to love and staying in love no matter what happens.

Lionel Ritchie's ballad is about professing a long-lasting love. The song is an honest declaration from his heart and soul.

Frontman Lionel Ritchie wrote this song in 1979, all about the ups and downs of love, and still being in love. The song appeared on their 1979 album Midnight Magic.

Kem's "Share My Life" isn't just a song about sharing your life with someone. It's also about being present for someone enough to help their dreams happen, too. 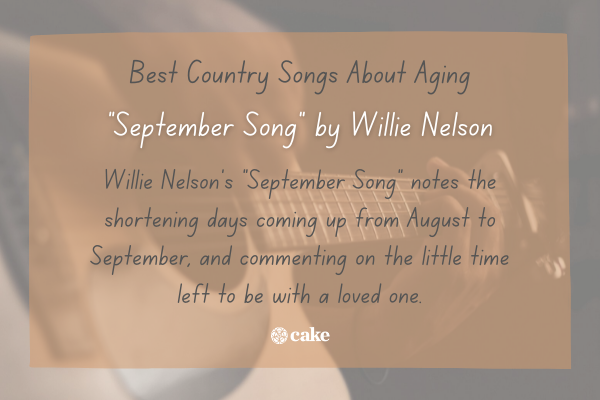 Country songs can be matter-of-fact or very revealing about life in general. The honesty is appreciated. Take a look at our picks for the best country songs about death for more ideas.

21. "Back When We Were Beautiful" by Emmy Lou Harris and Rodney Crowell

Released in 2013 on the album Old Yellow Moon, "Back When We Were Beautiful" is a song that recognizes how the world values youth and beauty.

22. "I Guess I Must Be Getting Old" by Kipp McLeod

Kipp McLeod’s song is an ode to the joyful exuberance of youth and its fleeting feeling of invincibility. Nothing quite like age to remind you that you are no longer as young and spry, as the song says.

Kenny Rogers began his career as a jazz singer, but has some long-standing hits in country. This song shares the belief that as people age in love, their love gets stronger, through all their trials and tribulations.

Toby Keith's song is about a man feeling ten feet tall and bulletproof when given a chance to call someone's bluff.

25. "I Don't Need Your Rocking Chair" by George Jones

"I Don't Need Your Rocking Chair" is everyone's ballad to feeling much younger than we look. And letting others know it.

26. "Time Marches On" by Tracy Lawrence

This song follows a baby in her crib, her brother, and her parents as they travel across time.

Conway Twitty was born in Arkansas in 1933 and made his career in country music. “In My Eyes” shares a story about seeing a woman throughout all her ages, and declaring her as lovely no matter how old.

Willie Nelson’s “September Song” notes the shortening days coming up from August to September, and commenting on the little time left to be with a loved one.

29. "The Night I Called Out to the Old Man" by Garth Brooks

"The Night I Called Out to the Old Man" is about a young boy's bravado with his father.

30. "That Silver-Haired Daddy of Mine" by Gene Autry

Gene Autry is crooning about his old dad. He'd like the ability to make him young once again, but he accepts that mom's waiting for dad in heaven. 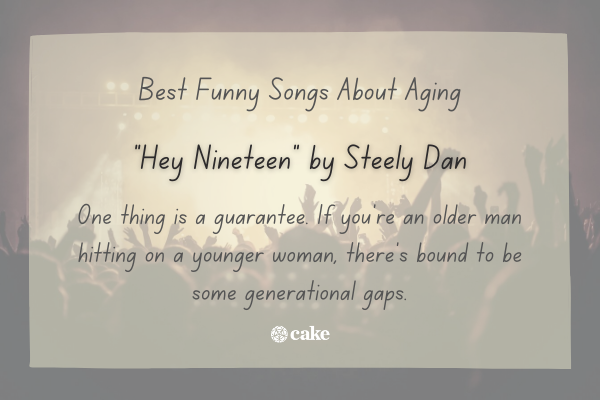 One person's mischief is another person's reality. The musicians below aren't shy about turning truth into something amusing for us all.

"My Generation" is a song about telling other people to ease up on the current generation.

Advice from an old man… You'll be waiting on your lady your whole life, so get used to it.

This song has some great swing and trumpet, reminiscent of Kansas City Jazz from the 1930s while it also shares a silly tale of a man saying his flirting days are over to his wife.

One thing is a guarantee. If you're an older man hitting on a younger woman, there's bound to be some generational gaps.

Written in 1953, this song a no holds barred, sarcastic look at fleeting love.

36. "When You’re Old and Lonely" by The Magnetic Fields

"When You're Old and Lonely" is a light-hearted look at loneliness inside old age. You're going to need to have someone near who will be the one person you can call when aging is exasperating.

37. "Little Old Lady from Pasadena" by The Beach Boys

"Little Old Lady from Pasadena" is about that one grandmother who drives wildly, and everyone knows about her.

Bodies change. Sometimes we age well, and sometimes we wish we would have aged better.

39. "Plea from a Cat Named Virtue" by The Weakerthans

A "Plea from a Cat Named Virtue" is a song about a cat that really understands his mom. He also wants to start hanging out with the neighbors to get her out of her funk.

It wouldn't be Adam Sandler if it wasn't the cheekiest look at growing old with someone.

Best Love Songs About Aging Together 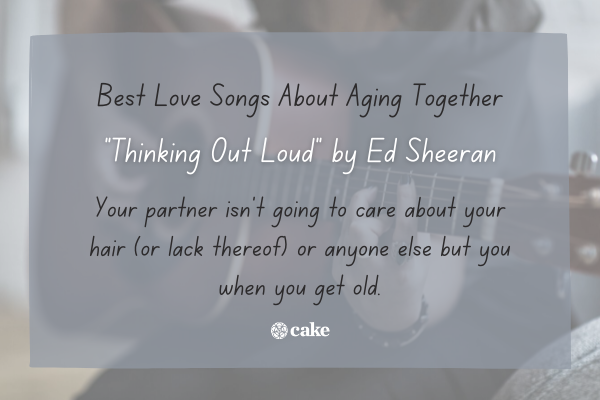 The artists below recognize that aging in love means fire sometimes accompanies pleasure or tension.

41. "Are You Lonesome Tonight" by Elvis

Are You Lonesome Tonight" is about a man missing his love—wishing to rekindle their romance or extinguish the light altogether.

42. "Grow Old with Me" by Mary Chapin Carpenter

"Maybe I'm Amazed" has the best piano accompaniment to a love song ever performed. McCartney belts out a robust and passionate appreciation for his love.

44. "Thinking Out Loud" by Ed Sheeran

Your partner isn't going to care about your hair (or lack thereof) or anyone else but you when you get old.

Tom Waits' lyrics and piano rebuff his gravelly but honest voice in "Take It with Me When I Go,” a song all about the good and bad things in life that you take with you to the end.

46. "Do You Remember" by Jack Johnson

"Do You Remember" is that question we all ask our partners when we stumble upon a good memory and want them to take that ride with us.

Through it all, your partner holds all of your truths.

The Beach Boys have been performing for almost sixty years. This song in particular holds a lot of sway for fans of the band based on its lovely and simple lyrics, all about love being one of the strongest parts of one’s life.

"Stay" is about the bilateral confusion of passion with the chaos and frenzy of a relationship. Rihanna performed this at the 2013 Grammys with Mikki Ekko.

Amy Ray and Emily Saliers are the duo behind the Indigo Girls. The "Power of Two" is about getting away from the crazy world for a minute to find normalcy together.

51. "You Are So Beautiful" by Joe Cocker

"You Are So Beautiful" stops the clock just for a moment so that this man can take a second to let his lady know how he feels about her.

Aging and getting older is a new experience every day. Thankfully there are some great songs to guide us along the way.