Loneliness can sometimes feel like eternal existential angst. Writers like Albert Camus, Jean Paul Sartre, and Franz Kafka have devoted novels wrestling with this feeling and what it says about the human condition. So it’s safe to say that loneliness as a state of being has been around for years.

When words literally fail you, or you’re just not into reading existential philosophy, you can listen to some melancholic melodies. Music can tug at our heartstrings without words, so if you’re feeling down and lonely, put on some jams to get you through this moment. You may even want to share a playlist and a Spotify gift card with a friend who's feeling similarly.

Best Sad Songs About Being Alone 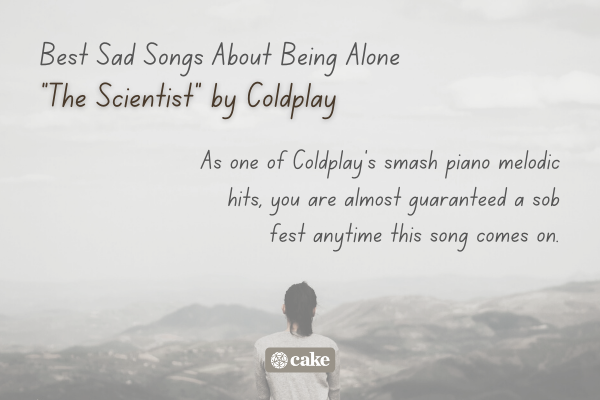 Sadness is a universal emotion, as is loneliness. Here are some tracks that you might love, no matter what mood you’re in.

If you want sad songs about missing someone or songs about being lonely, these are the ones you’ll need.

1. “How to Fight Loneliness” by Wilco

Taken from their 1999 album Summerteeth, Wilco’s lead singer Jeff Tweedy starts off this melancholic song with a list of advice based on the title. It’s a despondent number that inevitably does the opposite, but maybe it’ll make you feel better.

This is a song off her 2020 album, Manic. Halsey relates that she wrote the song one night, after calling through all the contacts in her phone out of sheer loneliness.

3. "I Wanna Get Better” by The Bleachers

Written by the lead singer after his sister died of cancer, this is a poignant song to rally oneself away from loneliness and depressed feelings.

You might be struggling right now, but what matters is that you’re still breathing. So take it one breath at a time.

Fall Out Boy’s tone can usually be described as some real positive pop-rock, but as this recent hit off their most recent album reminds us, they can get down with the sadness too.

6. "Friend, Please” by Twenty One Pilots

Long before Twenty One Pilots got famous with albums like Blurryface, they wrote raw, piano-oriented songs like this one.

The raw vocals and slower electronic beats in “Heavy” marked a departure from Linkin Park’s signature metal and screamy tone. Sadly, this was the last single released before lead singer Chester Bennington’s death by suicide.

Three indie singer-songwriters came together for a short EP called boygenius, where this song hails from. This first song starts off with the three ladies singing about an inevitable lack of ability to love someone.

9. "Eleanor Rigby” by The Beatles

A classic for lonely people everywhere, this song asks important questions: where do they come from? Where are they going?

10. "The Scientist” by Coldplay

As one of Coldplay’s smash piano melodic hits, you are almost guaranteed a sob fest anytime this song comes on.

Best Uplifting Songs About Being Alone and Happy

If you want a funeral soundtrack, songs about death may be more up your alley. However, if your loved one enjoyed the bliss of solitude more than the pain of loneliness, some of these songs might be great to play.

Here are some of the most uplifting songs about being alone and liking it:

The widely anticipated single “thank u, next” was an inspiring take on Ariana’s tumultuous past with her ex-boyfriends. Some taught her great lessons, but she’s happy to have moved on to someone else.

This song insists that no matter what knocks Platten down, she’ll still get back up and come back on top.

22 is one of the strangest ages. From feeling lonely to going out with friends, it can be an awkward in-between phase.

With an iconic and unforgettable opening line, Beyoncé captured the spirit of being single and then some. It’s the perfect song to blast after a breakup, especially if you’re a die-hard Beyoncé fan.

Carey won a Grammy for this uplifting track off her 1993 album Music Box.

16. "I Wanna Dance With Somebody (Who Loves Me)” by Whitney Houston

One of Houston’s most popular songs, this song is featured at every dance party, wedding, you name it--people will likely get up to dance to this song.

17. "One is the Loneliest Number” by Three Dog Night

Famous for ‘70s songs like Joy to the World, the band dispenses timeless advice—like three is better than two.

18. "Lonesome Feelings” by Bob Marley and the Wailers

Going by the title—of both the song and the band!—it’s hard to imagine that this song is uplifting. But as far as songs about loneliness go, it really is.

19. "Tears Dry on Their Own” by Amy Winehouse

All it takes is time. As a hard-living singer, Winehouse knew all about the rollercoaster that your emotions can take sometimes.

Who better to soothe your lonely feelings than the King?

Best Rock Songs About Being Alone

Need some sadness laced with angst? Let some rock music seep into your loneliness. Maybe it'll even help lift it.

Here are some of the top rock songs about being lonely:

A favorite from the album American Idiot, this song captures what loneliness feels like—watching a display of broken dreams pass you by.

Categorized as a “power ballad” this upbeat 80s song helped define the freedom and sadness after breaking up.

Conor Oberst, known by his stage name Bright Eyes, springs some real sad lyrics in “Lua.” “I can be my own best friend,” he sings while telling a story of trying to meet someone.

Straddling the line between rock and metal, this is perfect if you don’t like sappier loneliness songs.

There’s nothing wrong with feeling lonely from time to time. It’s natural. In this song, Robyn reclaims that feeling by dancing alone.

26. "Your New Twin Sized Bed” by Death Cab for Cutie

This song is tragic and despondent, which features heavily in a few Death Cab for Cutie albums. The main character recently put their queen-sized bed out in an alley because they don’t need it anymore.

Journey’s meandering track off their Frontiers album is so poignant, it’s hard to forget.

28. "Lonely Is the Night” by Billy Squier

A classic rock hit from 1981, Squier sings about how the life of a rock star is far lonelier than you think.

This song won critical acclaim in the rock and pop worlds. It’s about how you can feel incredibly lonely, but still want to be left alone.

A little-known track off their 1976 album Presence, it’s a song about how long time stretches out when you’re alone.

Best Rap and R&B Songs About Being Alone

Rap and R&B aren’t always introspective genres. These tunes, however, hit the spot.

Here are some of the best R&B songs about being lonely:

Eminem starts by talking about depression, but by the end of the song, he’s able to express a little optimism for the future.

A popular track off his album Big, G-Eazy talks about the jealousy and pain that comes with loneliness.

We’re all human, and sometimes we don’t learn until it’s too late. In this song, Akon wishes he’d treated his girlfriend better so she didn’t leave him.

34. "Inglorious” by Tyler the Creator

Tyler’s debut album focused on the loneliness he felt when his father left him. This song is a wrenching culmination of those themes.

A classic R&B singer, Hamilton talks about the difference between ‘won’t let go’ and ‘can’t let go’ when it comes to grief and loneliness.

36. "Killing Me Softly with His Song” by Roberta Flack

You might be familiar with the Fugees version of this moody and mournful song. Lauryn Hill does her best to give a proper homage to the original.

37. "It’s So Hard to Say Goodbye to Yesterday” by Boyz II Men

One song is rarely this versatile. But this nostalgic cry-song has been used at graduations, funerals, and more.

Sometimes, you miss someone and hope they still think about you every so often… even if it’s unlikely.

This 1998 hit was a follow-up to a dramatic duet between Brandy and Monica, entitled The Boy is Mine.

This song is the product of one of Lizzo’s visits to a psychic. The psychic told her that she should marry herself—so Lizzo wrote a song about it.

Best Country Songs About Being Alone

The country music genre has nailed lonely and sad songs. Here are some of the top country songs about being lonely:

Being the kid in a divorce is one of the toughest, loneliest spots to be in.

Capturing the story of a lovelorn couple, Charles and Willie Nelson sing about a young man telling his lover goodbye because he’s going into a fight he might not survive. When he doesn’t survive, his lover takes her own life. It’s Romeo and Juliet but with country twang.

43. "What Hurts the Most” by Rascal Flatts

This is one of this country group’s biggest singles, even though it’s one of their saddest.

This song was written based on two tragedies. Gill started the song in response to Keith Whitley’s death. The song sat around, though, unfinished and unperformed. When Gill’s brother died, he finally finished it.

Despite being written in 2004, and handling content that’s not typical in country music, it’s still a classic. This song about a double suicide is incredibly sad, especially if you’re a Paisley or Krauss fan.

46. "Today My World Slipped Away” by George Strait

Strait cranked out a few tearjerkers in the late ‘80s. This song, about how lonely a man feels as he finalizes his divorce, is one of them.

Jackson has been a staple of the genre for long enough that he’s experimented with lots of topics. One of these was the death of his housekeeper, Sissy, who was a dear friend.

One of the pillars of country music, McEntire sings about how it feels to be the last one to realize a relationship is failing.

Wayman Tisdale was a jazz musician and basketball star. He also knew Toby Keith. When Wayman died, Keith dealt with his emotions by writing a song.

This 1972 classic is perfect for anyone who’s lost a loved one, whether through a breakup or tragedy. The narrator insists that if his loved one imagined life without the most important things, she’d know what his life is like now.

Art is meant to help you process feelings. If you’re trying to heal and recover, putting together a therapeutic playlist is a great idea. Whether you like pop, rap,  or prefer a blend of all genres, the songs above are a great start to your personalized soundtrack.

If you're feeling lonely and want some advice, read our guides on how to combat loneliness for seniors and coping with loneliness after a loss.